In Victoria, the main legislation in force today, along with the Acts which hand land back, provide for Indigenous heritage issues and cultural and property rights, ie the Aboriginal Heritage Act 2006 and the Traditional Owner Settlement Act 2010.

The Adoption Act 1984 and Children, Youth and Families Act 2005 include sections relating to Aboriginal people, whilst the provisions which established the Koori Court in 2002 were incorporated in the Magistrates' Court Act (1989).

A list of current legislation with links to full text is available through the Austlii Australian Indigenous Law Library for Victorian and Commonwealth jurisdictions (and other states and territories).

In 2004 an amendment to the Constitution of Victoria acknowledged that the original Constitution Act was drafted without consultation, involvement or recognition of Aboriginal people. With the proviso that this section does not give rise to any legal claim, or affect the interpretation of any laws, the Constitution now states that:

(S.2) The Parliament recognises that Victoria's Aboriginal people, as the original custodians of the land on which the Colony of Victoria was
established -
(a)  have a unique status as the descendants of Australia's first people;
and
(b)  have a spiritual, social, cultural and economic relationship with their traditional lands and waters within Victoria; and
(c)  have made a unique and irreplaceable contribution to the identity and well-being of Victoria.

In an attempt to improve outcomes for Aboriginal people in the legal system, the Koori Court was established in Victoria in 2002 with  provisions incorporated into the Magistrates' Court Act (1989), following on from recommendations in the Victorian Aboriginal Justice Agreement. The Koori Children's Court began operating in 2005. Also known as circle sentencing, the system was first introduced in Canada in 1992 and now operates in other Australian jurisdictions.

The courts operate within the Magistrates Court both in Melbourne and regional Victoria.  A magistrate chairs the hearing, and Elders, respected persons and family members can be included. The victim can attend, or present an impact statement.

This approach to sentencing has been the subject of several evaluations, relating to Victoria, other Australian jurisdictions and international experiences:

Principles of dispute resolution have also been incorporated into native title deliberations, with a 2007 amendment to the Native title act encouraging a negotiated outcome.  Assistance is provided both through the Federal Court and the National Native Title Tribunal.

"The protection and control of significant cultural sites and forms are related to broader legal issues concerning cultural identity, self-determination and political sovereignty. In particular, the law relating to Indigenous cultural heritage cannot be separated from the issue of land rights and the social, political and economic implications of the loss of those rights over the course of European settlement." [1]

"Heritage consists of the intangible and tangible aspects of the whole body of cultural practices, resources and knowledge systems developed, nurtured and refined by Indigenous people and passed on by them as part of expressing their cultural identity...The heritage of an Indigenous people is a living one and includes items which may be created in the future, based on that heritage. Any definition of Indigenous Cultural and Intellectual Property should be flexible to reflect the notions of the particular Indigenous group and the fact that this may differ from group to group and may change over time." [2]

This body undertook many projects to identify and record archaeological heritage - including over 40 relating to Aboriginal people and places. This legislation formalised the view of a culture frozen in time and the importance of the anthropological-archaeological perspective - rather than the protection of a living culture for its peoples.

In 1984 the Commonwealth enacted the Aboriginal and Torres Strait Islander Heritage protection act, to cover the Commonwealth and states. A 1987 amendment (since repealed by new Victorian legislation) - inserted a section that related just to Victoria, giving Aboriginal people a greater role in the protection of their heritage.

The Victorian  Aboriginal heritage act (2006) aligns heritage issues more closely with planning and development systems, with VCAT as the arbiter in the event of disputes. It creates the Victorian Aboriginal Heritage Council (membership to consist of 11 Aboriginal people), Registered Aboriginal Parties to include Aboriginal people in decision making and a system of permits and management plans.

To be a cultural adviser, the person must be appropriately qualified in a discipline such as anthropology, archaeology or history; or have extensive experience or knowledge in relation to the management of Aboriginal cultural heritage. Some commentary on the implementation of the act is available through our journal databases - available on line and/or in hard copy inside the Library, and off site to Victorian registered users.

Some Indigenous Land Use Agreements under the Native title act have been negotiated to include cultural heritage protection.

Indigenous intellectual and cultural property protocols seek to identify, acknowledge and protect the rights of communties to their cultural and intellectual heritage. The nature of these resources, their creation and dynamic nature sits outside a western legal tradition of ownership and property rights and so to avoid appropriation and exploitation, processes are being established to allow communities to devise terms for their benefit.

The report from the Royal Commission into Aboriginal Deaths in Custody made recommendations to address Indigenous over-representation in the judicial system and has informed many of the developments in the legal system. The library holds many related publications. 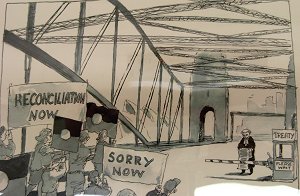 Reconciliation march, John Spooner, H2005.73/3
This image is in copyright.