The Public Service in Victoria

The European settlement of Victoria officially began in 1836, with the establishment of the Port Phillip District. The District came under the administration of New South Wales so public service lists for that period were the responsibility of the New South Wales government.

In 1851 the separation of the Colony of Victoria from New South Wales occurred, however a fully representative government, complete with public sector departments and authorities, wasn't established until 1855. Victoria became a state in January 1901, with the establishment of the Commonwealth of Australia. 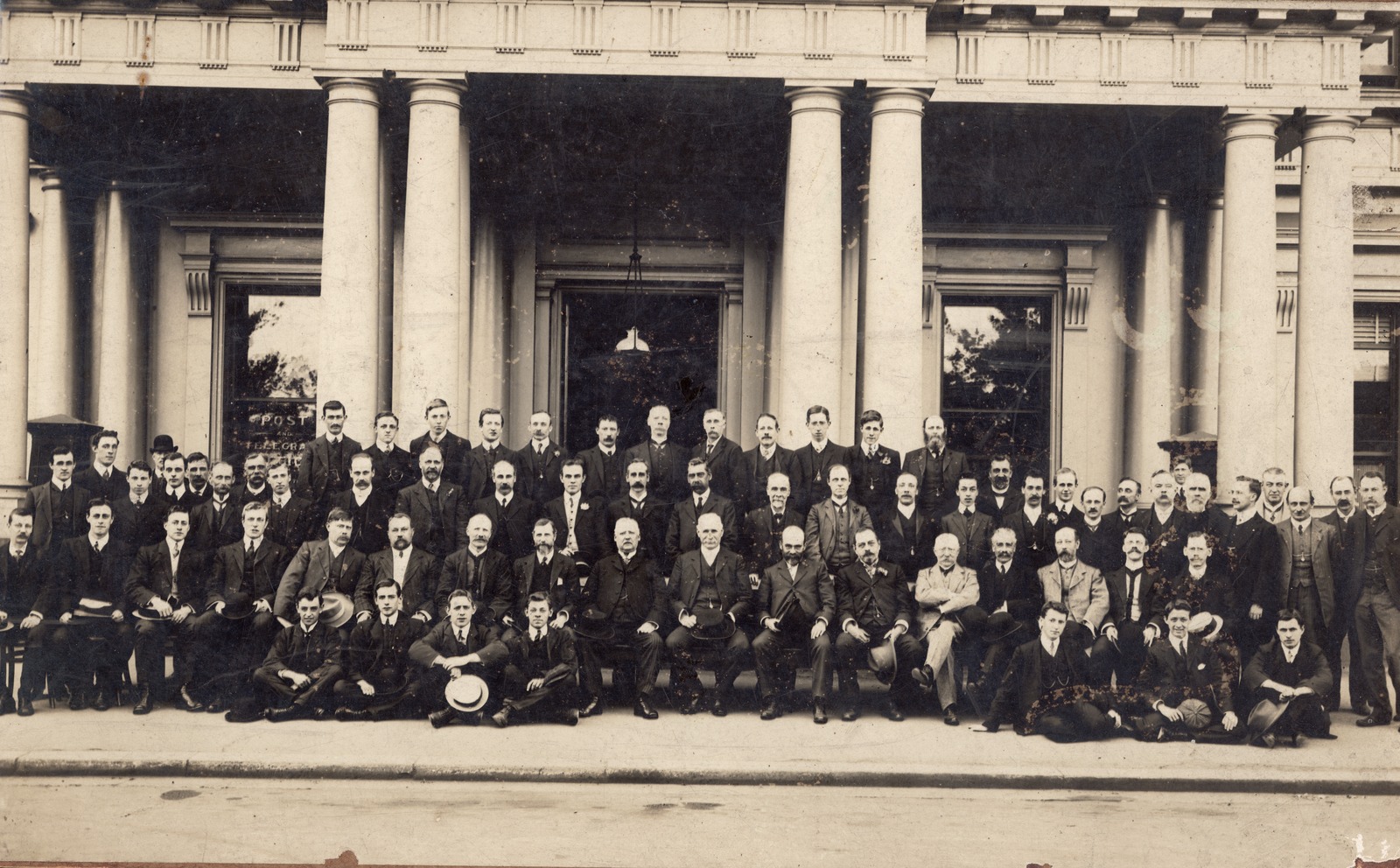 Published annually it includes a section usually labelled the “Blue book” which lists people such as the governor, ministers, members of Parliament, judges, some officers of the police and defence forces, university professors and some senior officers not employed under the Public Service Act.

The Blue books are online via the Victorian Parliamentary Papers Database.

Please note: some years have more information than others. For example in the issues from 1887 to 1891, the Blue book included most public servants.

Also known as the “Blue book”. This list includes; governors, ministers, members of Parliament, judges, senior offices in the police force, officers of the defence forces, most public servants and senior government officials not employed under the Public Service Act.

There is a civil establishment section listed in the table of contents of the Statistics of the colony of Victoria for the years 1856-1962.

Online - 1851-1855
Available online at the Library in the Ancestry Library Edition eresource. Part of 'Victoria, Australia, selected trial brief and correspondence registers and other images, 1837-1993'. Look for 'Blue Books', then sections in each book labelled 'Civil establishment' and 'Pensions'.

Online - 1863 to 1883
Searching the Victoria government gazette with the subject "Civil Service" and the keyword "lists" will return most lists from 1863 to 1883. These are not complete lists but include 'classified officers'. (Note that employees of the Melbourne and Metropolitan Board of Works were listed elsewhere).

There are a small number of lists available online through the Victorian Parliamentary Papers database with intermittent coverage spanning 1851-1891.

Online - 1886-1965
Searching the Victoria government gazette with the subject "Public Service Act" and the keyword "lists" or "persons employed" will return most most years from 1886 to 1965.

Until 1944 the list was usually published in the gazette on 31 January, or a few days prior, so you could browse those gazettes for the list. From 1969 to 1975 it was published in late May.

See the tab above for more on Government gazettes.

'Blue books 1851-1855', part of the Colonial microfiche series, in the Family History & Newspapers Room at LTMF 53 (V4). Look for sections in each book labelled 'Civil establishment' and 'Pensions'.

Use online and microfilm options in preference to print where available.

New South Wales, Australia, Returns of the Colony (Blue books)
These volumes record sets of statistical returns of the Colony of New South Wales and of areas under its jurisdiction.They were compiled annually from 1822 to 1857 by the Colonial Secretary for transmission to the Secretary of State for the Colonies in London.
Further information on this collection can be found on the NSW State archives website.

The Civil Establishment (1822-57) section includes lists of officers in the Civil, Judicial, Police, Penal, Medical, Ecclesiastical and Educational Establishments. Information includes: position, date of first appointment and salary. An alphabetical list of officers usually appears at the beginning of the section.

The Returns of the Colony can be found in the following collection -
Returns of the colony New South Wales: [microform] Colonial Secretary. Sydney.
Available in the Newspapers and Family history Reading Rooms - Call number  GMF 118  BOX 1

and can also be found in the following databases -

This series consists of expenditure authorities received and maintained by the sub-Treasurer of the Port Phillip District. Supporting documentation includes listings of staff at specific locations, for the payment of wages.Copies of the Port Phillip Expenditure Accounts are held at the Public Record Office Victoria (PROV). Many volumes have been digitised and can be accessed online through the PROV website.
There is no online index to the records however the following index is available at PROV.

Although the records of many Victorian government agencies are held at the Public Record Office Victoria,  many records remain with the relevant agency, or may have been destroyed.

Try searching the PROV website for specific government departments and agencies or explore their series of online indexes, available for some of their larger collections of employment records, including:

Further information on various government areas can be found on separate pages of this guide i.e. teachers and transportation. 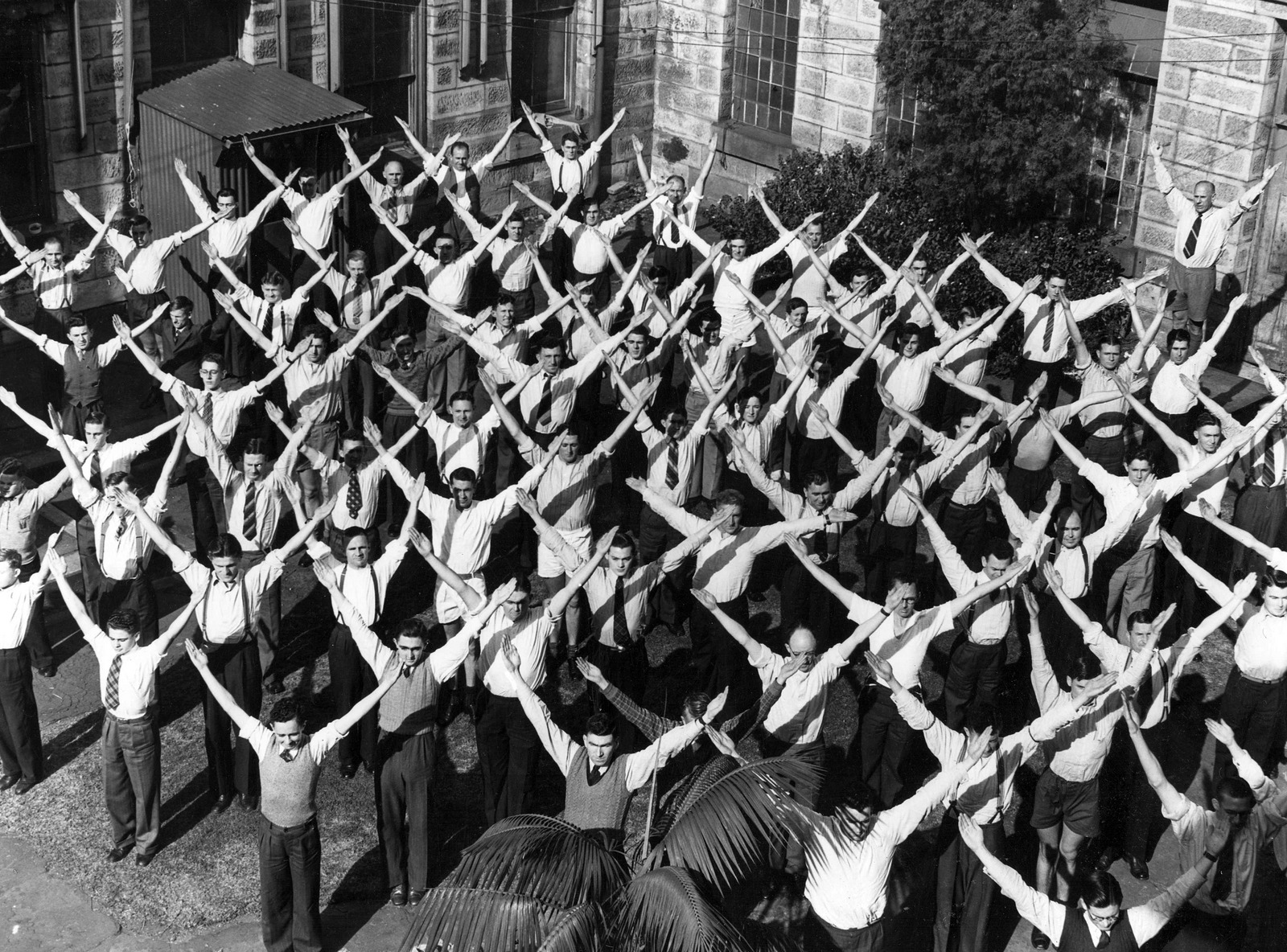 The Australian Public Service was established with the Federation of Australia, on January 1, 1901. All appointments to the public service were made under section 67 of the Australian Constitution, which continued until the commencement of the Commonwealth Public Service Act 1902.

Details of  public service appointments and vacancies can be found in the Commonwealth Government Gazette.

1901-2012
Digitised copies of the Commonwealth Government Gazette are available online through the  Trove database.
PDF copies can be accessed through the  Federal Register of Legislation.

Oct 2012 onward -
The following collections can be accessed through the Federal Register of Legislation.

35,000 records of persons who were listed in the 1904 and 1920 publications List of Permanent Officers of the Commonwealth Public Service. Details include, name, date of birth, date of appointment, class and salary.

Try searching Trove for a name, a name and place, or a name and department. Use quotation marks around keywords to search as an exact phrase, i.e. "William Ross Anderson". 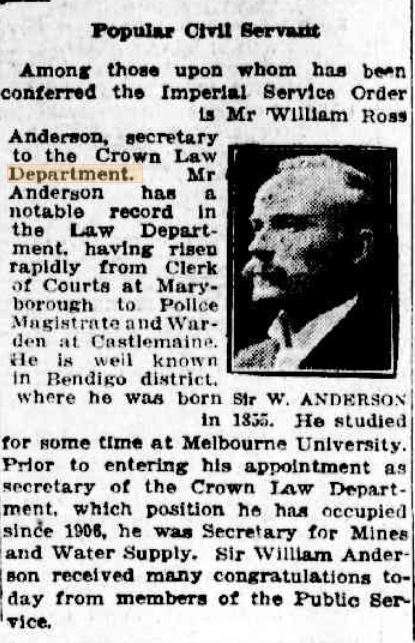 If the newspaper isn't on Trove you may need to explore the collections held in the State Library's Newspapers & Family History Reading Rooms.

Our Library subscribes to a wide range of current and historic Australian and international newspapers databases. They are available in the Library and many can be accessed offsite by Victorian residents who are registered State Library members.