The Miscellaneous (M) series consists chiefly of private records relating to Australia, New Zealand and the Pacific held in the British Library, the National Libraries of Wales, Scotland and Ireland, university libraries, county record offices, museums, religious archives, learned societies and private homes. You can browse the list of private organisations, personal papers and UK County Record Office records from the AJCP portal. The M Series also includes some official records from the Hydrographic Office, Post Office and the Ministry of Defence. 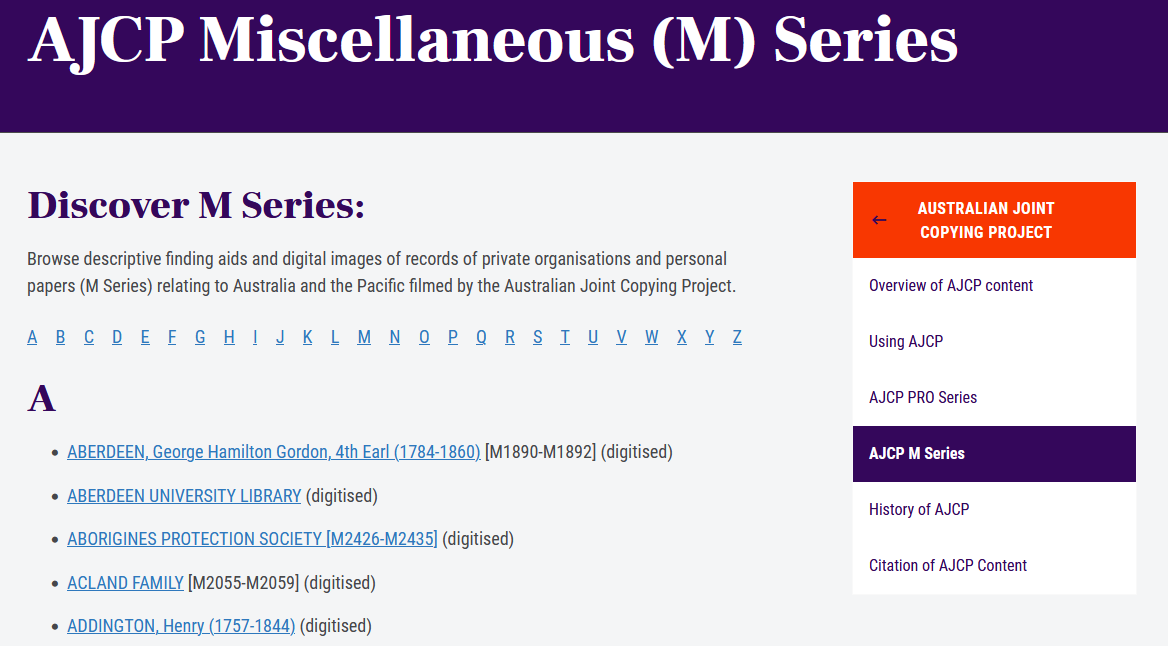 The collection is listed alphabetically by creator and each collection has a finding aid. Not all the collections are completely digitised - you can limit your results to online only, by choosing the view online items only filter.

You can use either the Handbook - a digitised version of the hardcopy is available online from the link on the right hand side of this page, or use the finding aid to search and browse the collection online.
See the Finding records page in this guide for more information on searching the collection.

The Handbook provides a description of the subject or responsible body for the documents and a date range: 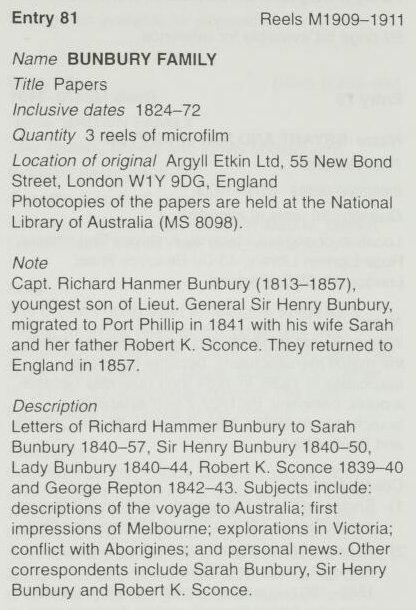 On the online finding aid, the collection is listed alphabetically by creator and each collection has a finding aid. Not all the collections are completely digitised - you can limit your results to online only, by choosing the view online items only filter.

The records of organisations highlighted here reflect Australia in a historical context and the information within may not reflect current understanding. Australian Aboriginal and Torres Strait Islander people are advised that these records may contain information which may be considered culturally sensitive and may cause distress, including names and images of Aboriginal and Torres Islander people now deceased.

Records of the Methodist Missionary Society, 1798-1903
Includes committee minutes, minutes and reports of district committees, correspondence between missionaries and general secretaries and publications. The early minutes record the appointments of the first Methodist preachers sent to New South Wales and Van Diemen's Land, discuss their activities in New Zealand, relations with Reverend Samuel Marsden , and their work amongst the Indigenous communities.

Collections from the Public Record Office of Northern Ireland, 1798-1936
Includes descriptions of the goldfields, sheep farming, voyages to Australia, economic and trade conditions, the attitude of colonists to Irish political prisoners and letters from settlers and residents in Australia, 1823-1905 and journals, 1848-1865. Some highlights letters back to their family written by of H. Maguire and J. J. Maguire from the Victorian goldfields 1852-1866, Letters from Sampson Lawrence, Castlemaine, Victoria describing life as a miner, unemployment on the goldfields, politics and the visit of Duke of Edinburgh, 1866-1880.

Collections held by the Royal Commonwealth Society relating to Australia, New Zealand and the Pacific, 1810-1973
Includes scrapbooks of Sir William Allardyce, 1882-1921, Reports 1833 and 1835 of James Backhouse and George W. Walker of visits to penal settlements at Port Arthur and Norfolk Island and Indigenous settlement at Flinders Island and albums of cuttings 1910 to 1914 of Thomas Sedgwick relating to Imperial migration.

Collections held by the National Library of Ireland relating to Australia and New Zealand, 1797-1968
Includes papers of the Lalor family regarding Peter and the Eureka uprising 1854.

The papers of individuals highlighted here reflect Australia in a historical context and the information within may not reflect current understanding. Australian Aboriginal and Torres Strait Islander people are advised that these papers may contain information which may be considered culturally sensitive and may cause distress, including names and images of Aboriginal and Torres Islander people now deceased.

Papers of Captain Charles Swanston
1891-1893, 1960
Swanston was managing director of the Derwent Bank and part of the Port Phillip Association who colonised Port Phillip.

Bunbury Family papers
1824 - 1872
A collection of letters correspondents includes Captain Richard Hanmer Bunbury to his wife Sarah Bunbury, 1840-1857, Captain Richard and Sarah both write to Sarah's father, R. C. Sconce The Bunbury's emigrated to Port Phillip on the Argyle arriving in March 1841. Bunbury was a magistrate in 1841 and at Williamstown he was Superintendent of the Water Police in 1842 and Harbour Master in 1844 returning to England in 1857. Other related papers can be found in the State Library Victoria's collection.

Autobiography of James Dannock, 1898
Describes voyage to Australia from England in 1848 on board the Castle Eden, working on farms near Sydney, bullock driving near Kilmore, Black Thursday bushfires, Victorian, New South Wales and Western Australian goldfields and interaction with Indigenous communities near Swan Hill. James Dannock born in Norfolk in 1831, emigrated with family in 1848 and died in Melbourne in 1907.

Papers of the Gardiner Family
1782 - 1959
John Gardiner 1798-1878, born in Dublin and arrived in Hobart in May 1823. In 1836, Gardiner went to Port Phillip and then to Sydney. Together with Joseph Hawdon and John Hepburn  drove 300 cattle overland to Gardiner's Creek near Melbourne. Bought a house at Gardiner's Creek and established a cattle station at Mooroolbark.

Papers of Sir Edward Macarthur
1854-1857
Collection includes letterbox 1856-1857, despatches from Macarthur, as acting Governor of Victoria to Henry Labouchere, the secretary of the state for the colonies.

Papers of Sir Richard Owen
1796-1889
Includes documents that discusses many fossils, bones and specimens of Australian animals for example Le Souef to Owen; Platypus discovered at Indigenous mission in Gippsland, 4th October 1886. Sir Richard Owen, 1804-1892, comparative anatomist and palaeontologist. A publication in the State Library Victoria's collection by Owen,  "Researches on the fossil remains of the extinct mammals of Australia".

Papers of Sir Walter Baldwin Spencer
October 1880-May 1932
Includes correspondence to A.W. Howitt, 15 July 1895 to 11 September 1903. This collection of correspondence, notebooks diaries and papers documents Spencer's anthropological interests, research and writings on Indigenous communities. Other documents from the State Library Victoria's collection, "The native tribes of Central Australia" and Album of photographs, sketches and notes compiled for Spencer's book, "The native tribes of Central Australia" published in 1899.

Papers the Somers Family
1876-1973
Includes memorabilia, photographs and declarations of loyalty and presentation addresses. Arthur Herbert Tennyson Somers Cocks, 1887-1944 was appointed as Governor of Victoria in 1926.

Album of Photographs by William Blandowski
1862
Album contains 142 miniature albumen prints. Includes images of geological views of Victoria, Indigenous Australians, and birds and mammals of Australia. William Blandowski was a founder of the Geological Society of Victoria and appointed as government zoologist to the newly formed Museum of Natural History in 1854. 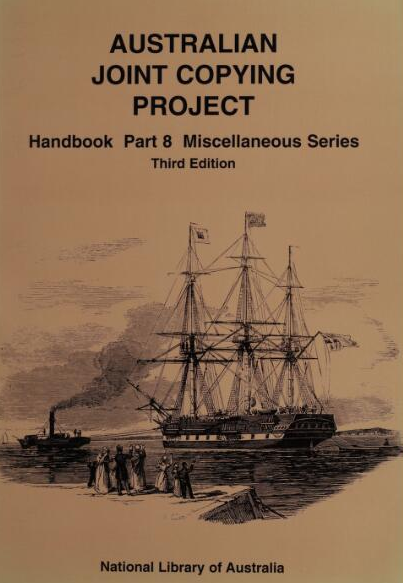 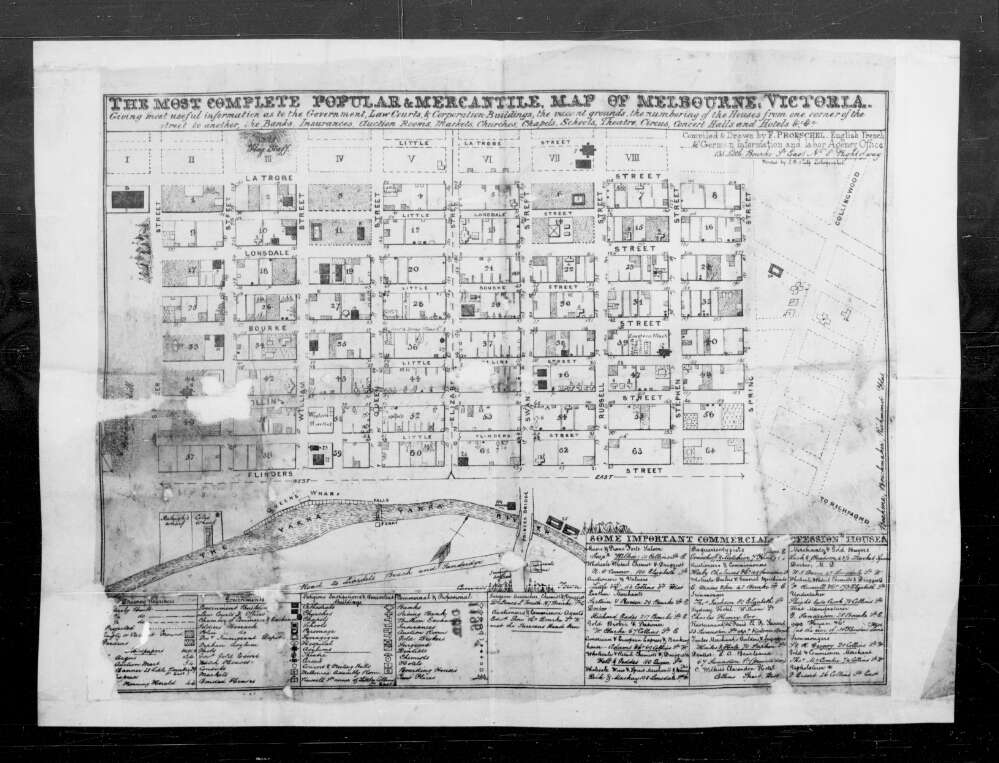 Proeschel. F, Mercantile map of Melbourne, Records held by the Public Record Office of Northern Ireland (as filmed by the AJCP) Series D1196/File.F

An index to despatches between the Governor of Victoria and the Secretary of State for the Colonies, for the years 1851-1860

Index to Colonial Office. Victoria. Original correspondence and entry books (dispatches) 1851-1860 and War Office.
Out-letters-Secretary of State (Victorian dispatches) 1851-1854
This is a subject index of people, places and subjects mentioned in the despatches of the Governor of Victoria and the Secretary of State for the Colonies. Includes subject, whether the despatch originated in Britain or Victoria, the despatch number and date, and the page number of the despatch in the typed transcripts made by M.E. Deane.