The British armed forces were present in Australia from the time of the first fleet, up until 1870 when local militias assumed full responsibility for defence. Four companies of Marines arrived with the first convict fleet in 1788. They were relieved from 1790 with the regiment that became the  New South Wales Corps, under Major Francis Grose - later reformed into the 102nd Regiment of Foot. Local groups were formed in the colony from 1801 - "loyal associations" of mostly free settlers, to bolster the regular army units. These forces don't appear in any of the AJCP muster records.

After increasing difficulties, culminating in the Rum Rebellion, the Corps was disbanded and the next Governor, Lachlan Macquarie arrived in 1809 with his regiment - the 73rd Regiment of Foot, 1st Battalion. From this time until 1870, 24 regular army regiments were stationed at various locations around the country. Some of these soldiers came with their families, and some stayed as settlers after ending their service.
These documents record something of the lives and experiences of the military serving in the Australian colonies and the history of these administrative relationships with England.

The War Office (WO) records is the main series for researching ancestors in the military.

These series may also be relevant:

Handbook Part 11 - Classes filmed in the final 5 years of the AJCP.
Published in 2005, it includes the final rolls filmed. This material is incorporated in the online finding aids, and not listed separately as in the handbooks.

Tracing ancestors serving in the forces

To find records for an individual soldier, the following published indexes will help you to navigate to the correct AJCP documents. Generally, there is no name index in the record series themselves.
The information included varies, from a name in a list - arranged hierarchically, to details on family members, time served and pay.

The Useful resources box on the right hand column of this page includes further references.

You can use either the Handbook - a digitised version of the hardcopy is available online from the link on the right hand side of this page, or use the finding aid to search and browse the collection online.

See the Finding records page in this guide for more information on searching the collection.

The Handbook provides piece level information, with a date range and description of the subject or responsible body for the documents.

The online finding aid lists the various series of records and direct links to individual items in their hierarchical structure.
You can either browse this collection to see the full list of records at the various levels, or search for a regiment name in the Finding aid search box:
Guide to the Records of the War Office (as filmed by the AJCP)

Once you have selected the record series you need - the series links below take you to the relevant page of the finding aid, which then links through to records. You can search the finding aid for other records relevant to the regiment of interest. The blue link icon indicates content is available online. Click on the thumbnail images on the left hand side of the page to go to the records themselves: 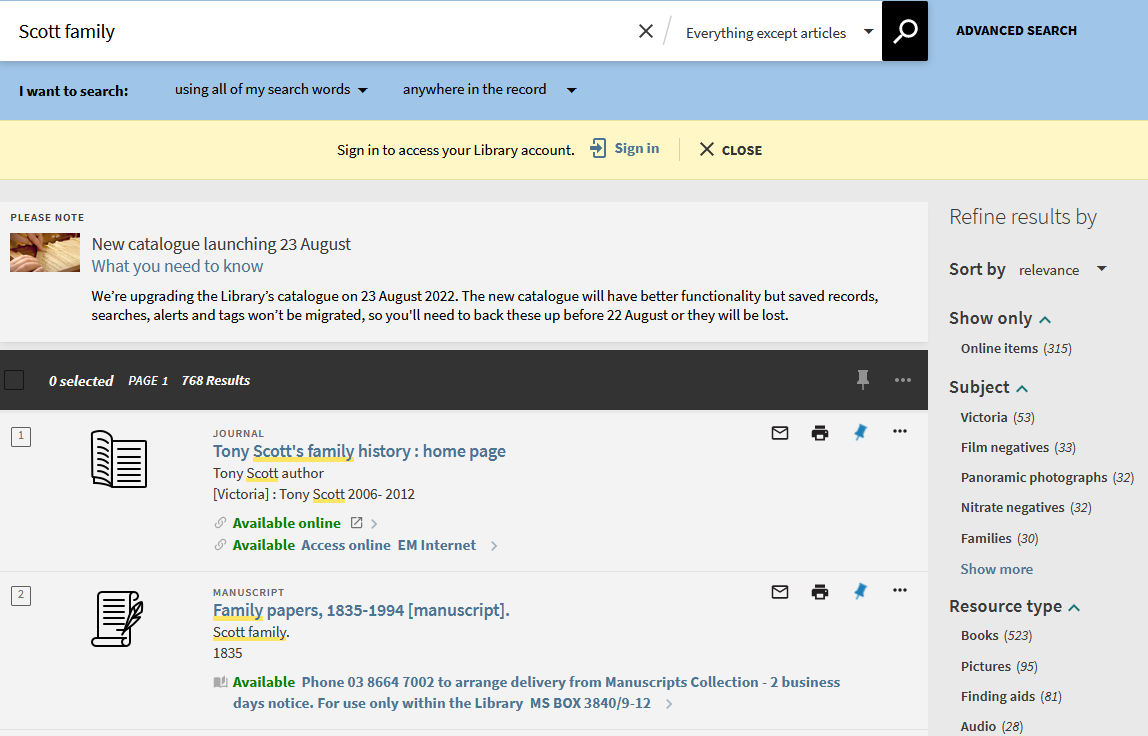 WO 17. Monthly Returns, 1790 - 1865
List of officers present or absent, by name and regiment; numerical return by rank and regiment; number joined, discharged, died in the period; name of regiments arriving or departing. Regimental lists and quarterly pay lists giving names, rank, location at muster, a daily rate of pay and other details. Also lists of deserters, new recruits, promotions and discharges.

WO 93. Judge Advocate General's Office : Courts martial; Miscellaneous records. Alphabetical index to WO 92
This is an alphabetical Index to WO 91 and WO 92. It includes the accused's name, rank, regiments and the date on which the charge was laid. From this you can go to the entries in WO 92, arranged by date for information on charge and sentence -  including transportation. WO91 was not filmed for AJCP.

WO 92. Judge Advocate General's Office : Courts Martial. General Courts Martial, Registers, 1806 - 1838 - .
AJCP filmed Volumes 1-4 of 9 volumes. A table of reports of courts-martial in WO 90.  Includes some listings for events in South Africa during the Boer War (pieces 8-10).

Admiralty records  (ADM) include material from the Admiralty Office up to 1832 and the Board of Admiralty after that date.

AJCP records include ships musters, the Logbooks of Admiral's and other Officers, correspondence of the Admiralty and Secretariat, Medical Departments and the Sick and Hurt Board, and records of the Australia, China and Pacific Stations.

ADM 101. Surgeons journals  - includes journals for convict ships, travelling to Australia, 1816-1856, emigrant ships bound for Australia and New Zealand, 1825-1853, and some naval vessels. Coverage includes treatment of medical and surgical cases, daily sick list, statistical abstracts of the incidence of diseases, and general comments on the health and activities of the ship's company.

ADM 51. Captains’ logs - logbooks (navigational records) and journals (narrative accounts) maintained by the Captain of each ship on voyages to the Pacific, Australia and New Zealand. Include details of the employment and position of the ship and ship's company, weather ,daily routine of a naval vessel under sail, some personal comments. Not all logs include a crew list.

ADM 52. Masters’ logs - record the Ship's course, position, weather encountered, employment of the hands, and punishments carried out. The Sailing Master was responsible for making sketches and charts of land and harbours not previously visited.

ADM 53. Ships’ logs  - for the Sulphur, Driver and Royalist.

ADM 36. Ships’ musters Series I - includes the entire crew of the ship, date of entry, date of first appearance on the ship, previous ship or location, place of birth, age, name, rank, date of death or discharge, next ship, issue of slop clothes, beds, tobacco, wages, dates of musters.

ADM 97. Medical Department In-letters  - letters from the Admiralty Office, and the Admiralty Secretary's Department, Admiralty and Navy Board of the Commissioners of Sick, Wounded and Prisoners, the Physician General of the Navy and the Director General of the Medical Department, from naval commissioners abroad, medical officers, surgeons and others connected with hospitals and hospital ships; letters relating to prisoners of war, etc. Some of the letters include requests for posts on convict ships and reports of conditions on board convict ships, and a number of letters relate to emigrant ships. 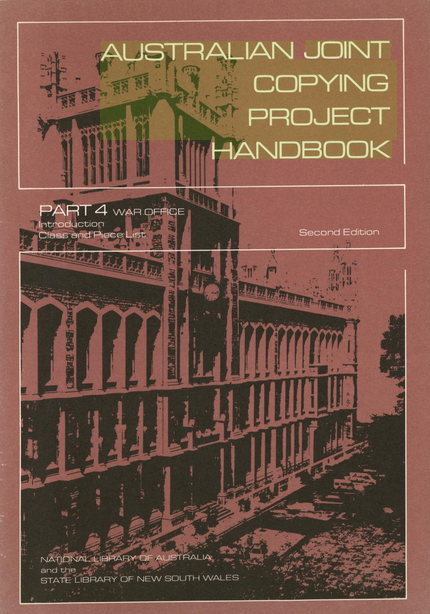 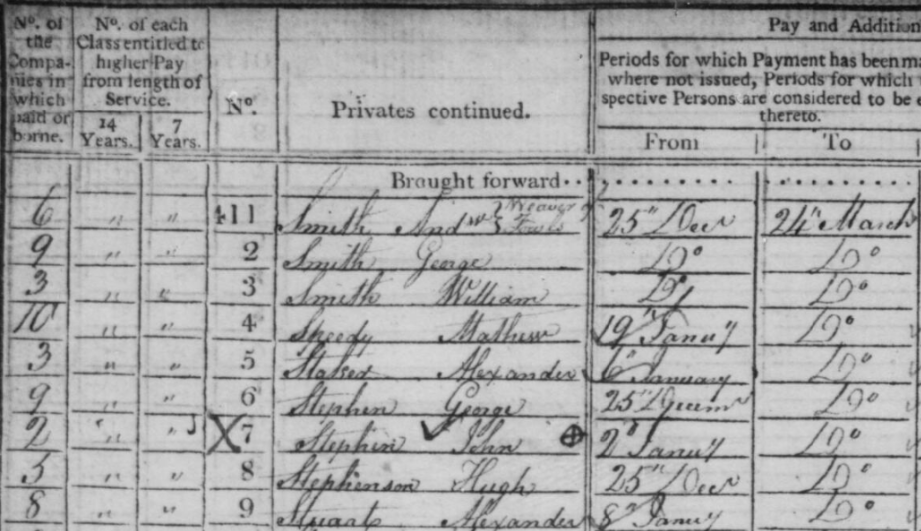 Military bands in the Australian colonies

Includes bibliographies, a biographical register and references for the development of music in the colonies. 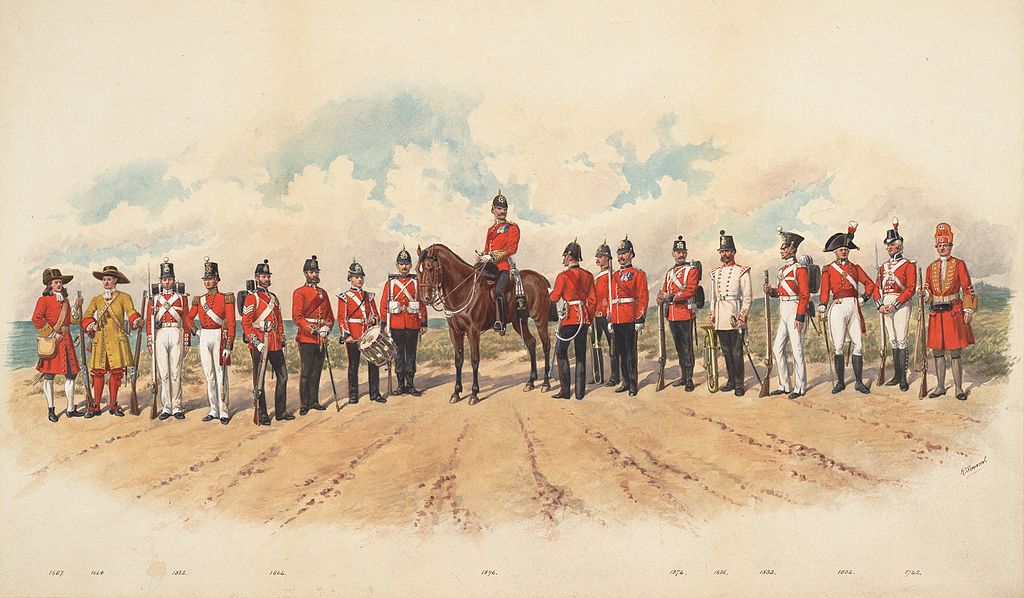 A Colonial regiment : new sources relating to the New South Wales Corps, 1789-1810.
Lists all serving soldiers in the NSW Corps.

Finding the family redcoat : tracing your British military ancestors in Australia
Redcoats of the British garrison in Australia between 1788 and 1870, and infornation on the records themselves and where to find them.