From the time of first contact, Aboriginal people have been calling for land justice.  Governor King received this request in 1805...

"If they could retain some places on the lower part of the river they should be satisfied and would not trouble the white men.  The observation and request appears to be so just and equitable that I assured them no settlement should be made lower down the river. [1]

From the settler perspective, land came to be seen as a means of separating colonised from colonisers and as an instrument of civilisation:

Reserves of land should be made for their use and benefit in order that the best means may be taken for enabling them to pass from the hunting to the agricultural and pastoral life, and they may have spots on which to place themselves whenever they may have been induced by any means to abandon their wandering habit.[2]

For Victoria the protectorate, later mission system and the legislative framework that governed the lives of Aboriginal people from 1869 until 1967 with the abolition of the Aborigines Welfare Board virtually destroyed the rights of Aboriginal peoples in relation to their lands.

Through legislation, some land has been returned:

Developments in legislation and the consent determination process has allowed native title claims to be recognised in Victoria, details below.

This, the outcome of a 10 year battle was the first consent determination under native title legislation. In December 2005 Justice Merkel of the Federal Court conferred non-exclusive rights on nearly 400 square kilometres of land in north western Victoria:

The orders I propose to make are of special significance as they constitute the first recognition and protection of native title resulting in the ongoing enjoyment of native title in the State of Victoria and, it would appear, on the South-Eastern seaboard of Australia. These are areas in which the Aboriginal peoples suffered severe and extensive dispossession, degradation and devastation as a consequence of the stablishment of British sovereignty over their lands and waters during the 19th century. [1]

The Traditional Owner Settlement Act provides for the making of negotiated agreements for land claims between traditional owner groups and government. In the event of dispute, the Right people for Country project will determine the traditional owner group. It requires the relinquishment of the right to make any native title claims, now or in the future.

This page from the Department of Justice includes links to the steering committee report that made recommendations for a new native title framework, describes the purpose and operation of the act and web links to related information.

Members of the the Yorta Yorta Aboriginal community undertook an unsuccessful native title claim, finally rejected in 2002 after 8 years of deliberation in both the Federal and High Courts of Australia.  The Yorta Yorta Co-operative Management Agreement, sitting outside the native title process was a negotiated settlement describing the relationship between the Yorta Yorta Coporation and the state government regarding the care and management of designated areas of land and water within their traditional country.

In 2007, the Gunditjmara people were successful in their native title claim. An Indigenous Land Use agreement was negotiated between the state government and the Gunditj Mirring Traditional Owners Aboriginal Corporation. The Winda Mara Aboriginal Corporation and the Lake Condah Restoration Project contribute to land management projects.   The Aboriginal Lands Act (Lake Condah And Framlingham Forest) Act 1987 returned land at both these former mission sites to their communities.

This is the first agreement made under the Traditional Owner Settlement act. The native title claim of the Gunai/Kurnai people has been before the courts for 13 years. There has also been dispute between the parties as to who is entitled to pursue the claim - in 2010 the Federal Court adjudicated in favour of Gunai/Kurnai over the Kurnai.

The agreement is the first comprehensive settlement under the Traditional Owner Settlement Act 2010 (Vic), and settles four native title claims in the Federal Court dating back to 1998.

In 2018 the Victorian Government, the Taungurung Clans Aboriginal Corporation, and the Taungurung traditional owner group signed a Recognition and Settlement Agreement.

1. Clarke on behalf of the Wotjobaluk, Jaadwa, Jadawadjali, Wergaia and Jupagulk Peoples v State of Victoria. 2005 Federal Court of Australia 1795.

From the Picture Collection... 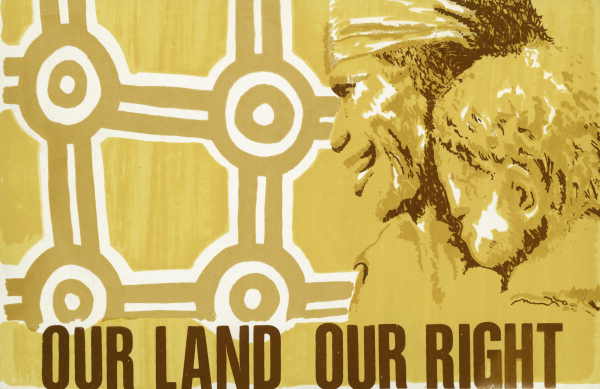 The research arm of AIATSIS provides a range of services. The Native Title research and access service provides research and policy advice relating to native title in national, state and territory jurisdictions. Includes links to a range of online publications and conference papers.

This act provided for legislated land rights for Aboriginal people in the Northern Territory. The Explanatory memorandum provides a background to the bill.
For more information -  Land rights  from the Northern Land Council.

The Corporation was established to support the purchase of freehold title to land by Indigenous groups. Employment, training and land management programs are run to support sustainability and cultural and socio-economic development.

The Library's Ergo website has a section on Indigenous rights, including Native title and the Yorta Yorta claim.

From the National Museum of Australia, Collaborating for Indigenous rights. Includes sections on the civil rights, land rights, the people and organisations involved and a resources section.

Indigenous health and wellbeing: the importance of country

Much work has been done identifying the linkages between connection to country and indigenous health and wellbeing. This paper from AIATSIS provides an overview of research and annotated summary of materials.

The trouble with tradition: native title and cultural change compares native title regimes in United States, Canada and New Zealand and criticises the tradition heavy requirements of the Australian jurisdiction. The Yorta Yorta case is used for analysis.