Hugo and the visual arts

Truly one of the giants of French culture, Victor Hugo's talents and influence crossed many disciplines and borders. Not only a great writer, he was a gifted and prolific artist and many of his drawings and other works on paper still survive. Substantial collections are held at the Bibliothèque Nationale de France and the Maisons de Victor Hugo. They are remarkably creative and expressive works combining techniques such as pen and ink, cut-outs and random ink blots, marks and rubbings. This uninhibited and imaginative style invokes the later work of the surrealists and their use of the unconscious. Andre Breton provocatively declared ‘Hugo is a surrealist when he is not being a fool,’ in his surrealist manifesto. Read this post on the Tate's website for an interesting discussion on accidental markmaking in art, including Victor Hugo's technique.

Here are some links to exhibitions exploring Hugo's artwork, including his relationship to the surrealists.

A number of books featuring Hugo's drawings are held in our library, including catalogues for the exhibitions listed above.

Although admired by Victor Hugo, and Charles Baudelaire, and now widely accepted as a master printmaker, Charles Meryon struggled to find recognition for much of his life and ended his days in an asylum. His dark poetic vision of Paris and personal struggle echo vividly the world created by Hugo in Les Misérables. 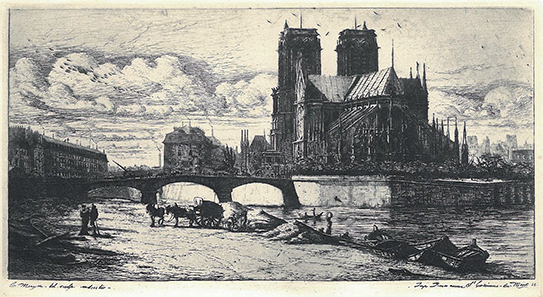 Meryon is perhaps best known for his Eaux-fortes sur Paris (Etchings of Paris).This series of 22 etchings, produced from 1850-54, documents and captures the gothic squalor and brooding grandeur of old Paris, prior to Haussmann's renovation of the city from 1853-1870. A beautiful reproduction of the etchings can be found in The etchings of Charles Meryon, by Campbell Dodgson, 1921. They offer a haunting counterpoint to the photographs of Charles Marville.

Search our Library catalogue for more books on the work of Charles Meryon.

Victor Hugo clearly had a deep understanding of the power of images and embraced the new medium of photography. He encouraged his sons, François-Victor and Charles to master the emerging craft of photography and to illustrate his life and work in exile, on the islands of Jersey and Guernsey. Hugo collaborated with his sons and Auguste Vacquerie (brother of Hugo's son in law) to produce hundreds of images. You can browse many of these images on the Musee d'Orsay website. Do a general search for 'Victor Hugo' or search by artist for 'Charles Hugo' or 'François-Victor Hugo' or 'Auguste Vacquerie'.

Hugo was a friend and champion of several great photographers of the time including Edmond Bacot and Nadar (Félix Tournachon).  A history of photography: the Musée d'Orsay collection 1839-1925 covers the early decades of this art form through French eyes, and includes examples by Bacot, Nadar and Charles Hugo.

Nadar, by Nigel Gosling, features 80 portraits, largely taken in Nadar's Paris studios between 1855 and 1870. They provide a who's who of 19th-century French luminaries - writers, artists, composers, theatricals- and describe a cultural millieu that forms a backdrop to Hugo's oeuvre. Included in this pantheon is a poignant portrait of Victor Hugo on his deathbed.

Search our Library catalogue for more resources on Félix Nadar.

Hugo’s writing has had a wide ranging and enduring influence on music and performing arts. During his lifetime he was acquainted with celebrated composers such as Liszt and Berlioz. In addition to his own theatrical works, his writing has inspired opera, musicals and songs. The library holds scores for some of these works including: Ruy Blas, Lucrezia Borgia, Rigoletto (Le roi s'amuse), and Mazeppa (from Les orientales).

A work that is perhaps little known today is Miss Esmeralda, based on Notre-Dame de Paris (The hunchback of Notre Dame). The libretto was published in Melbourne for the London Gaiety Burlesque Company Australian tour in 1892. It has been digitised and is available in full text through our Library catalogue. Find reviews of the production in Australia on the Trove database.

Hugo’s poetry has been a popular source of lyrics for many composers and there are many lovely examples in Romantic French song: 1830-1870. This is a six volume work offers a wonderful compilation of 300 romances and melodies. The songs are printed facsimiles of the 19th-century sheet music, preserving the original arrangement and in some instances cover artwork. These volumes are available for browsing in the Arts Reading Room.

For a list of musical works inspired by Hugo in our collections search for Victor Hugo and limit results to audio for sound recordings or scores for printed music under the resource type on the left of the screen.

Les Misérables has been the subject of many adaptations in various media. Wikipedia offers an extensive survey.  The musical, Les Misérables, is well represented in a range of formats, including books, video, sound recordings and scores. A simple catalogue search for Les Misérables musicals will return a good selection to choose from.

We have also compiled theatre programme ephemera files relating to several stage productions in our Theatre programmes collection. This material can be requested by registered library users and viewed in the Heritage Collections reading room. 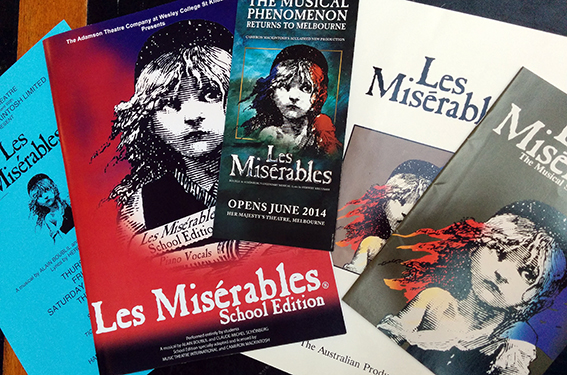 A selection of ephemera from the Les Misérables theatre programme file, featuring Australian productions from 1989 to 2014.

You can use the 'Articles' search tab on our catalogue to quickly find reviews of recent productions of Les Misérables.

To access this content from outside the Library you will need to be a registered Victorian resident.

It is interesting to compare the cool reception of the Barbican production by Irving Wardle writing for the Times, London, 10 Oct 1985, ('musicals trivialize everything they touch') with the enthusiasm of Frank Rich writing for the New York Times, 13 March 1987 ('this 'Misérables' has everything to do with the electrifying showmanship of the 20th-century musical').

Here is an example of some of the reviews available for Hugo's play Hernani which opened to great controversy between classicists and romantics in Paris in 1830. Hugo satirised the response to the play in Les Misérables when he had the royalist grandfather of Marius citing the play as an example of 19th century decadence:

'"The first blackguard you will meet wears his goat's beard, thinks he is very clever, and discards his old relatives. That is republican, that is romantic. What is that indeed, romantic? Have the kindness to tell me what that is!  Every possible folly. A year ago, you went to Hernani? I want to know, Hernani! antitheses! abominations which are not written in French! And then they have cannon in the court of the Louvre. Such is the brigandage of these things."' (Les Misérables, vol 1 p 665-6)

See this contemporary report on Hernani from Le Figaro and this English language review from the Foreign Quarterly. For further commentary from France use the Bibliothèque Nationale de France Gallica database.

The notoriety of the play received coverage at the the time in British newspapers. It was produced in London soon after and then became the basis for Verdi's opera, Ernani.

The meaning, merit and influence of Hernani is still debated by literary critics and scholars. See these articles from Neophilologus and Le Rayonnement International de Victor Hugo 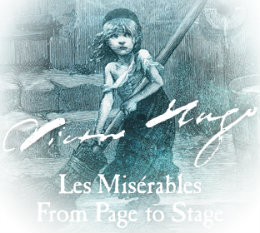 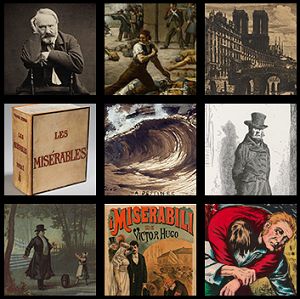 Camille Saint-Saëns was a friend and admirer of Victor Hugo.

Listen to  this homage,  Hymne à Victor Hugo, played on the organ by Gerard Brooks. 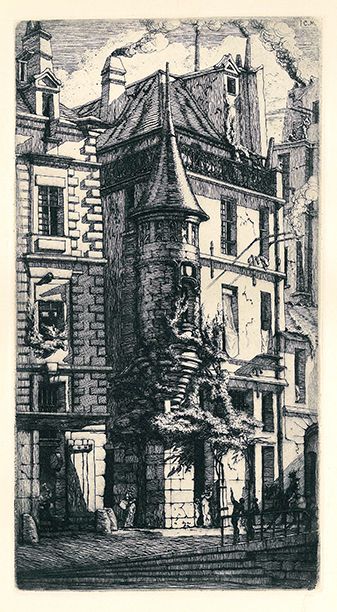 Find other versions of this song through our Naxos Music Library database, available outside the Library to Victorian registered users.

We also hold the music score.