The language of racing

Many unique and colourful terms are used in relation to thoroughbred horse racing. Some have become part of day to day speech. Many of them are defined in dictionaries such as the Macquarie or the Oxford. Both these are available online within the Library. They can also be accessed outside the Library by registered Victorian users.

This commercial site has a glossary of terms which is very useful. Here's a few of the terms that are often used.

The Melbourne and Caulfield cups are handicap races, meaning that the horses are assigned weights based on their performance, so the best horses carry the heaviest weight.

The Cox Plate and Mackinnon Stakes are WFA races. In WFA races, horses carry weights according to their age. In the three year old classic races (Derbies and Oaks), level weights are carried (a filly running in a Derby gets weight relief).

The WFA scale was devised by Admiral Rous. He had an interesting association with Australia in the early part of the 19th Century.  He retired back to England where he published The laws and practice of horse racing. This is available in the Library on microfilm and also online.

These are distances between placed horses.  They are expressed in horse lengths or 'portions' - such as 'head'; 'half head' or 'a short half-head'.

A horse that was unplaced. In a results list of a race, following the place getters, the rest of the field are listed under 'also ran'.

Betting has always been an integral element of the racetrack. On course licenced bookmakers match wits with punters, adjusting odds to reflect the money they have taken on horses.

These are fixed odds guaranteed when the bet is placed regardless of subsequent fluctuations in the betting on the race. Legal oncourse bookmakers give fixed odds.   The odds for each horse will be adjusted regularly prior to the race depending on how much is bet on the various horses in the race.

Bookmakers need to make sound judgements about how much money they may be liable to pay out for certain results. If they cannot cover bets on a particular horse, they will try to 'lay off' their liability with other bookmakers by betting on the horse themselves.

The 'pari-mutuel' was the first totalisator. It originated in France about 1870. Rather than offer fixed odds like a bookmaker, the tote system involved calculating the total amount wagered on a race, removing an operating percentage, and then distributing the pool equitably amongst winning tickets. The operators of the Tote couldn't lose. It initially was operated manually and was quite cumbersome.

John Wren famously ran an illegal tote in Collingwood in the 1890s after winning a large amount on Carbine in the 1890 Cup.  Frank Hardy's well-known Melbourne novel Power without glory offers a fictionalised view of illegal offcourse betting. He was sued by the Wren family for libel with his central character John West bearing more than a passing similarity to Wren.

George Julius developed a mechanical totalisator that automated betting. It was first used at Auckland's Ellerslie racecourse in 1913 and made its first Melbourne Cup appearance in 1931.

A term used when a horse wins by a long distance. It came into popular use when Newhaven was easily winning races in 1896, and eventually won the Melbourne Cup of that year. To learn more about this saying read the blog that answers the question if Daylight did actually finish second.

Someone who sells betting information or advice on racehorses. Also known as 'urgers'. 'Banjo' Paterson's poem Hard luck tells the story of an unfortunate tout.

This is when the odds amount to less than double your wager. In any bet with quoted odds, (with a bookmaker), if you win you get back the amount of your wager plus your winning dividend, which is a multiple of your bet. With 'odds on' your dividend will be less than double your wager. So a horse at '5/4 on' means that if you bet $5 then you will get back your original bet plus a $4 dividend. 'Evens' means if you win you collect $10 (i.e. the $5 you wagered plus $5 winnings).

The first race broadcast in Australia, and probably the world, occurred in 1924 when Arnold 'Ike' Treloar called a Port Adelaide meeting. For more on Australian race calling try the book . 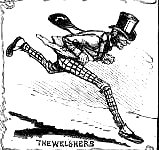 In the early days of racing there was little regulation around bookmakers and betting. Some unscrupulous types took bets and then disappeared without paying out. This was 'welshing'. Others 'scaled' the punters by taking bets and then returning the original wager amount to winners, undertaking to return the dividend later in the day.

At the Grand National meeting at Flemington in July 1906, Donald McLeod 'scaled' punters for several races. The mob turned on him and he was beaten to death. The furore that followed this shocking event led to the government introducing the Lotteries, Gaming and Betting Act. The Act outlawed gambling dens and regulated race courses and bookmakers. 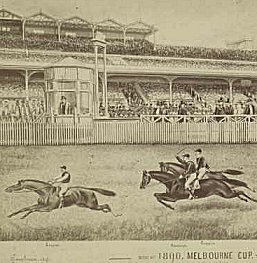 Photographic copy of a drawing or painting by Hasselman, H13932

Carbine, Highborn and Correze cross the line in the 1890 Melbourne Cup.

This view is from the inside of the track. It is interesting to compare this with the image on the Get started page.