Notable winners of the Melbourne Cup 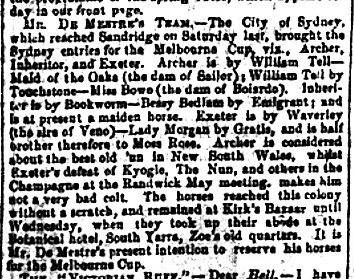 The first two Melbourne Cups were won by Archer, who was trained by Etienne de Meistre at Nowra on the south coast of .

It was long rumoured that Archer walked overland for the race. However, as per this article, he actually arrived in style aboard the City of Sydney with two other De Meistre runners.

In 1863 De Meistre's cabled Cup entry for Archer did not reach the Victoria Turf Club office in time, due to Melbourne's Separation Day holiday.

When racing officials refused to compromise all NSW trainers boycotted the race and only seven horses ran. De Meistre vowed never to race in Melbourne again however, he had a change of heart and won another two cups with Tim Whiffler (1867) and Calamia (1878).

Keith W. Paterson has written a book about the trainer titled The master’s touch.

Probably the most popular winners of the race were Carbine in 1890 and Phar Lap in 1930.

The win of Phar Lap has been well documented and the Library holds a range of items about his career. Phar Lap is on permanent display at Melbourne Museum. 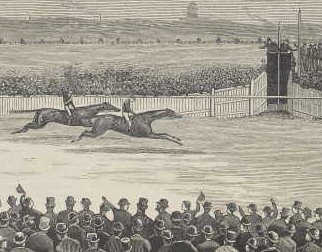 Bresis, a 3 year old filly, won the Cup in 1876. She is not the only 3 year old filly to win the race however, she has a unique record because in six days she won the Victoria Derby, The Cup and the Oaks.

The most versatile horse to win the race was Malua. He won the Cup in 1884 and also had wins in feature races from 1100 metres to over 4800 metres in the Grand National Hurdle. He also sired Malvolio, the winner of the 1891 Cup.

When Subzero, the 1992 winner retired, he became well-known as a clerk of the course’s horse. He was also used by his handler Graham Salisbury in an educational role. He was taken to schools and children were able to pat him, feed him and sit on his back.

In 2015 Michelle Payne became the first female jockey to ride the winner of the Melbourne Cup aboard Prince of Penzance trained by Darren Weir.

Born in 1985, Michelle is the youngest of the famous racing family. She has suffered serious injuries and falls during her career. The worst was in March, 2004 when she came down in a fall at Sandown Racecourse, Melbourne fracturing her skull and bruising her brain.

Her first Group 1 win was on Allez Wonder for Bart Cummings in the 2009 Toorak Handicap.

She is only the fourth female rider to have ridden in the Cup (she came 16th on Allez Wonder in 2009) and the news stories surrounding her win created a lot of interest. In September 2019 a feature film titled Ride like a girl, which focused on Michelle Payne's career and Melbourne Cup win, was released.

In looking at the history of the Cup, there are some interesting stories about non-winners.

Wakeful was the winner of 25 races from 44 starts and was unplaced only three times. Retired to stud, one of her foals, Night Watch, won the 1918 Cup.

In recent years Red Cadeaux started in the Melbourne Cup five times from 2011 to 2015. He came second three times and was unplaced twice.

In the 2015 Cup the ten year old gelding failed to finish due to a leg injury. While it was initially thought that he would recover after surgery, unfortunately he developed a blood clot and had to be humanely euthanized.

The Victorian Racing Calendar contains a variety of useful information. It includes:

It was published monthly and for most of the twentieth century there is an index by name of horse to the results page. 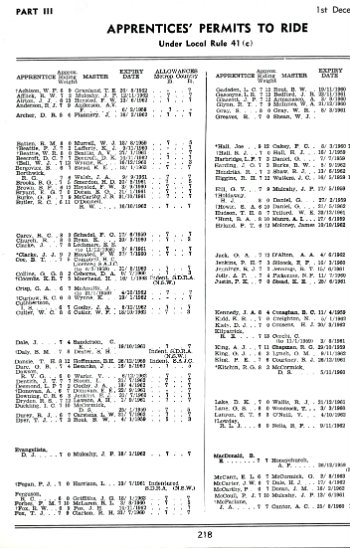 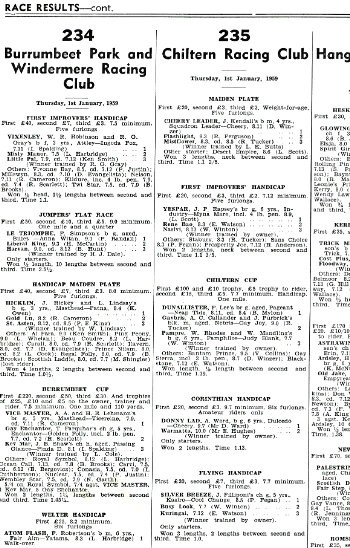 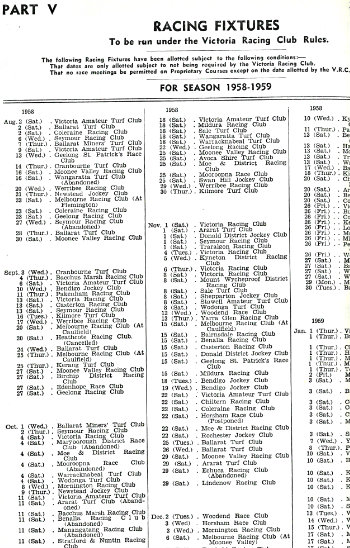