Around 15,000 Australian men and women, most of whom were born between 1870 and 1880, served in eight contingents raised in individual Australian colonies through the duration of the Second Boer War in South Africa between October 1899 and May 1902. The records of the Boer War are incomplete and in some cases the records for whole units are missing, however, the resources mentioned below provide select information about available records and access to them.

The Boer War spans the pre-and post-Federation period, therefore, records may be held by state government archives or by the Commonwealth National Archives of Australia (NAA). See the NAA guideThe Boer War: Australians and the War in South Africa, 1899–1902 As a general guide, the pre-1901 colonial period records are held in state government archives, and post-federation records are held by the NAA, although there may be exceptions to this. For information about available records and their locations see the NAA's guides, Finding families and especially The Boer War: Australians and the war in South Africa, 1899-1902. Ít is advisable to consult the website for the government archive in each state for information about their collections. An example is: NSW State archives relating to the Boer War.

The Official Record of the Australian Military Contingents to the War in South Africa is a very important resource and lists persons who served in each contingent for each state. You can find help using this resource through the Heraldry & Genealogy Society of Canberra's (HAGSOC) website.

Names are also searchable through the Australians in the Boer War: OzBoer database.

Over 600 Australians died during the Boer War and graves in South Africa can be found for many of the Australian casualties. The Commonwealth War Graves Commission is responsible for the maintenance of Boer War graves in South Africa. The Australian War Memorial's online Roll of Honour and active Roll includes details of casualties in the Boer War. The Victorian Registry of Births, Deaths and Marriages Australian Army War dead, 1885-1972 provides names of service men and women who died during or as a result of service in Australian military forces for each state.

Information about Victorian contingents to the Boer War can be found in the Defending Victoria website.

You can begin to search for a large number of resources relating the Boer War held by the State Library of Victoria by performing a search in the Library's catalogue using the term, South African War 1899 1902. Secondary sources have been published listing Boer War personnel in the various state contingents, for example, the First Tasmanian Contingent Boer War 1899-1902, First Victorian Contingent Boer War 1899-1902, The featherbed soldiers: New South Wales Lancers in the Boer War 1899-1902. Boer War images and photographic portraits of some Boer War personnel can be found in books such as those mentioned above and by searching the Library's catalogue and the Trove database. The catalogue provides options for refining your search results by subject, resource type and/or creation date.

The book, The South African War 1899-1902: service records of British and colonial women contains a section on Australian nursing sisters.

Newspapers contain valuable historical and contextual information. Many international, city and regional newspapers have been digitised. Digitised issues of numerous Australian newspapers including The Argus (Melbourne) and The Age (Melbourne) can be viewed through the National Library of Australia's Trove database. 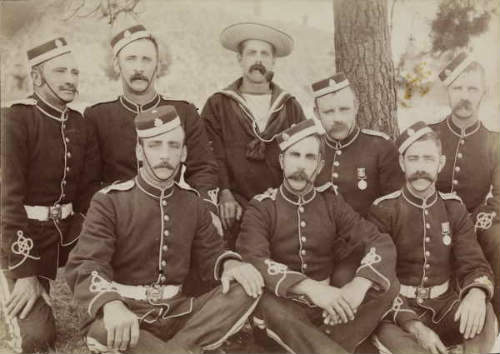 Army Service Corps, Melbourne, taken in the time of the Boer War, H6905

The Leader: souvenir of the departure of the Victorian contingent to the Transvaal, October 28 1899 provides a list of soldiers in the Victorian 1st, 2nd, 3rd and 5th Contingent with photographs. The Leader newspaper published photographs of personnel of the various Victorian contingents in the following issues: 1st Contingent: 4 November 1899, 2nd Contingent: 12 January 1900, 3rd Contingent: 10 March 1900, 4th Contingent (officers only): 14 April 1900, 5th and 6th Contingents: Supplement for 16 February 1901, 6th Battalion Australian Commonwealth Horse (Victorian): 17 May 1902 (group photographs only on page 35). Names of the people shown in many of these photographs can be found in the Library's online Australiana Index. The index will tell you which issue of The Leader their photograph was published in.

Details of Victorian Boer War casualties appear in They proved to all the earth.

The South African War chapter in A soldier in the family contains references to published Boer War unit histories.

Australia's Boer War: the war in South Africa 1899-1902 is a recommended resource.

Neil C. Smith's, News from the Veldt: Australians writing home from the Boer War 1899-1900 is an excellent starting point for this area of research.