The New Zealand wars were a result of disputes over land sovereignty between the British and colonial forces and Māori tribes.

Around 2,500 Australian men enlisted for the irregular New Zealand militia units. Military agents went to New South Wales, Tasmania, Queensland, Melbourne, Geelong and various towns on the Victorian gold fields offering land grants to those who enlisted. The majority of men who enlisted were single men, however, around 1,000 wives and children joined them and settled in New Zealand.

The books, Australians in the Waikato War 1863-1864, Australians at war in New Zealand and Blood brothers: the ANZAC genesis provide detailed information.

Those who enlisted in the four Waikato regiments were eligible for a land grant and were subject to Conditions upon which land in the Waikato Country, in the Province of Auckland, will be granted to volunteer militiamen willing to perform the after mentioned military services.

Some service records are held at Archives New Zealand and other repositories in New Zealand.

Online information can be found in the British forces in Victoria 1803-1870 and the Defending Victoria websites.

A number of British soldiers in a number of regiments based in Australia were also sent across the Tasman as a military force at various times between 1845 and 1847 and between 1860 and 1866. These soldiers can be traced through the Musters and Pay Lists as part of the Australian Joint Copying Project. Information can be found under the Imperial forces tab in this guide.

The Commemorative Roll commemorates Australians who died during or as a result of wars or warlike operations but who were not eligible for inclusion on the Roll of Honour. 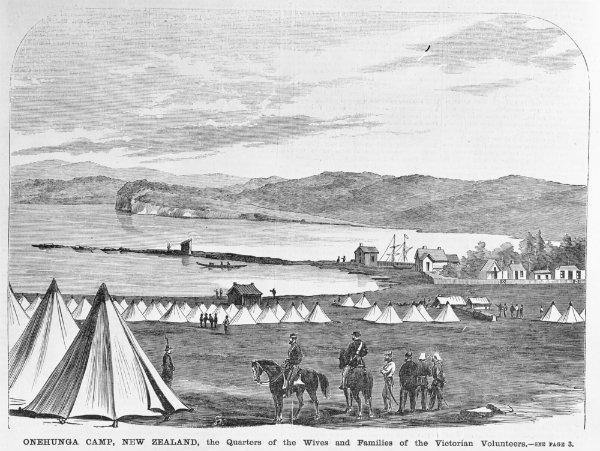 Onehunga Camp, New Zealand, the quarters of the wives and families of the Victorian volunteers,
IMP18/05/64/13

Marching to the Waikato

Australians at war in New Zealand