After the initial rushes cleared most of the readily accessible gold from Victoria, mining companies were formed to follow deeper leads. The Library's Ergo website gives more information on the rise of company mining.

The CD-ROM Mining shareholders index (1857 to 1886) gives details about companies and their shareholders that were originally published in the Victoria government gazette, including:

You can sort this information by shareholder or company name.

The microfiche Ashley mining index is another useful source for researching mining companies. It is an alphabetical index to 18,864 records of names of shareholders, legal managers, witnesses to signatures and applications for registration of mining companies in Victoria 1860-1864. Most of the information has also been sourced from the Victoria government gazette.

The book A contribution to the bibliography of the economic geology of Victoria to the end of 1903 (available online) lists references to books, reports and articles about mining companies and operations. These references are organised by town/goldfield name, and the names of major mines are also indexed. Most of the items referenced in this bibliography are available at the State Library. Some items may need to be pre-ordered for use.

The book Money pits: British mining companies in the Californian and Australian gold rushes of the 1850s provides information about a number of companies that operated in Victoria.

The two volume Register of gold nuggets found in Victoria 1868-1972 (Melbourne Museum collection) include localities and descriptions of the nuggets – they also name who discovered nuggets (but more often this is listed by company name, rather than a person’s name). The volumes are arranged by date and are not transcribed.

Historic newspapers are an excellent source of information about the fortunes of mining companies. See for example this report on the New North Clunes Gold Mining Company (The Star, Ballarat, 27 January 1864, page 4), which reports on the progress of the company, and gives the names of all of its officebearers.

A gazetteer of newspapers from the central Victorian goldfields (1851-1901) (PDF, 567 kB) is available online. Many of the newspapers that it lists are in the Library's collection.

Many gold rush era newspapers can be searched and accessed through the free Trove website. Many issues of the following newspapers are available to search and read online:

There are many gold rush era newspapers available in microfilm format at the State Library of Victoria.

An index to newspaper items for Stanley and surrounding districts
This index is arranged by subject, including mining, people and hotels

Indexes to Melbourne newspapers are listed in our How to find items in newspapers research guide.

For more information about accessing newspapers, visit our How to find newspapers research guide. 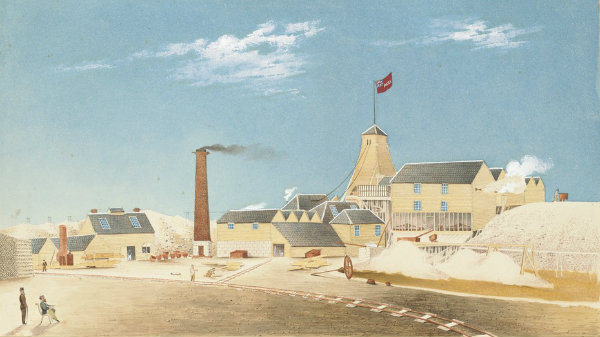 Search the catalogue to find drawings, etchings, paintings and photographs of mining companies in Victoria. To locate images, search using:

The Library holds a significant number of prospectuses for mining companies. Prospectuses usually include information about initial share prices, names of company directors, maps and descriptions of the area to be mined, diagrams showing test bore sites, geological information and more.

To find prospectuses, search the catalogue by company name.

You can also find prospectuses published in historic newspapers, many of which can be read online on the Trove website.

Maps like this digitised Plan shewing the relative positions of the Frenchman's, White Horse, Terrible, Cobbler's and Long Gully Leads, Ballaarat, Victoria, Australia show where mining companies' operations were based. Thousands of historic maps can be viewed online via our catalogue. Search the catalogue by place or company name.

The Australian Subject Index (card index) includes a mixture of references to articles on major mining companies, information in the Library's Victorian local history files, and the occasional press cutting.

The index is currently in closed storage. For access to this index please use the Ask a Librarian service.

For example, one index entry refers to an accident (22 drowned in a shaft) in 1882 at the New Australasian gold mine at Creswick. The index tells you that an article commemorating the centenary of this event appeared in The Age newspaper, 9 December, 1982, page 3. This newspaper is available on microfilm in the Library's Newspaper Reading Room. 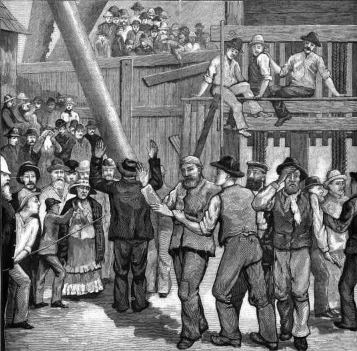 Creswick mining disaster: - scene at the head of the shaft - the braceman announcing the death of the miners, IAN23/12/82/193