This page suggests useful resources when researching the lives of your ancestors who spent time in central or suburban Melbourne.

8. Cityscope and the Unit Report

10. Other resources, such as directories, gazetteers or the historical plans collection.

To find relevant maps in the catalogue, choose the Maps tab and the search with keywords relating to the area where your ancestor/s lived, such as the names of streets or suburbs.

From your search results, you can further narrow your search by choosing from the options on the left hand side of the page. For example, you can limit by creation date or subject.

Beginning in 1895, Melbourne Metropolitan Board of Works (MMBW) produced several series of maps of Melbourne and suburbs, which provide a high level of detail for these areas. These maps provide a historical record of Melbourne streetscapes and environmental features, and are useful for identifying where people lived, street names and features which may have since changed. Garden layouts are sometimes featured, house names may be included, and building materials are sometimes revealed.

The Library holds an extensive collection of MMBW plans.

Many of the MMBW detail plans in our collection have been scanned and are available via our catalogue, but be aware that although we have close to 3,000 plans, we do not hold every plan in the series.

Find MMBW plans in the SLV catalogue: To find relevant maps in our catalogue, use the Maps tab, and combine the keyword MMBW with the names of local suburbs or streets. Using the names of two intersecting streets usually works well.

From the late 1800s through to the early 1900s land across Victoria, especially in the vicinity of Melbourne, was rapidly being sub-divided and developed, particularly at the height of the land boom of the 1880s. To promote sales of these sub-divisions, real estate companies produced bold posters and flyers featuring maps of the lots for sale at upcoming auctions. These are what we call "auction plans".

Auction plans can help you identify when your ancestors’ block of land was originally purchased. They can also highlight features of the area, such as train stations, significant landmarks and the surrounding landscape. Occasionally Auction plans may mark the name of a local mansion, or indicate who lived at a particular property. Sometimes buyers and prices may be pencilled onto a map

Most of the Library's auction plans were donated by real estate agencies from their own collections. Auction plans tend to feature suburban areas, (which were typically being developed as Melbourne's train and tram lines were extended), but we do have some auction plans of estates and blocks of land in rural Victoria. Generally the maps on the auction plans concentrate on a very small area, showing the location of the blocks of land that were to be sold, and highlighting some of the most desirable features, such as the local shops, train stations and public parks.

Many auction plans are very plain black and white posters, showing only the date and time of the auction, the terms and conditions, and a simple map of the subdivision. Others are highly decorative, featuring colourful illustrations, decorative fonts, cartoons and even verse. Buyers were frequently wooed with the promise of free train tickets and lunch under a marquee.

Be cautious when using the information presented on auction plans. They often feature exaggerated claims about the areas for sale, and the maps that illustrate them regularly distort distances to make the lots for sale appear to be closer to valued amenities such as shops or transport (look for any break in the lines - these means that a section of a street has been omitted). Sometimes auction plans even refer to railway stations or tramlines that were never opened.

If your ancestors lived, worked or owned businesses in the CBD or South Melbourne, fire insurance plans can provide you with a high level of detail about the buildings they lived or worked in.

First issued in 1888, the Mahlstedt fire insurance plans were drafted by a fire insurance company to record detailed information about the form and construction of buildings in the city of Melbourne. The plans are rich in information, including the number of levels in a building, construction materials, location of fire-protected and unprotected openings, and the names of businesses. Between editions changes to buildings were recorded by pasting overlays over the original maps. In some cases the State Library of Victoria holds several copies of the same volume, each containing slightly differing overlays.

Street directories can provide a snapshot of an area at a particular point in time. They can help you identify streets that have changed names or no longer exist.

You don't need a special appointment to view street directories. Simply request the items from the catalogue, before 5.30pm, and they will be delivered to the Information Centre for you to use.

The University of Melbourne has also digitised a selection of Melway street directories between 1966-1999.

To use the City of Melbourne's online interactive map:

To overlay historic maps of your chosen location:

For more handy tips on how to use the City of Melbourne's Interactive Map, click on the question mark in the blue toolbar at the top of the map.

Cityscope and the Unit Report

Cityscope and the Unit Report are a regularly updated series of reports which provide information about properties. Entries are typically quite brief, and may include names of owners and occupants, dates of construction and refurbishments, sales histories, valuations, building names and addresses.

The precursor to today's telephone directories, directories listed the addresses of businesses and/or householders.

There were also many other Victorian directories, most of which have been microfiched and are available in the Family History and Newspapers Room here at the library.

Some directories included maps, either as part of the main volume, or as a separate sheet and some of these seperate sheet maps are held in the Maps Collection. For example, we hold several maps produced by Sands & McDougall.

Many of the Morgan's, Moulton's and Collins street directories have been digitised and include maps, street name indexes, and advertisements. 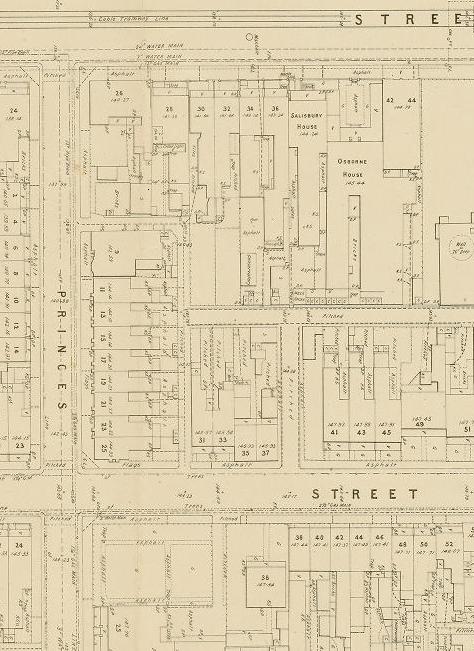 Example of an auction plan 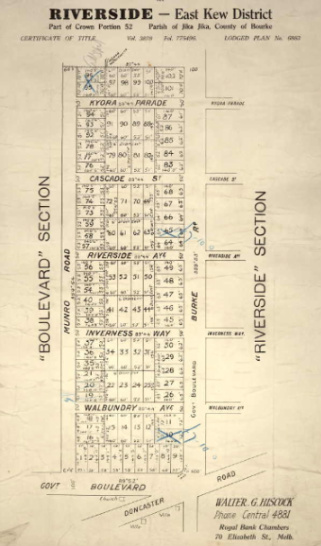 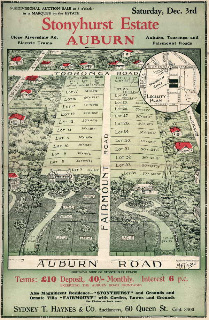 An example of a Mahlstedt Fire Insurance plan page