Australia has been involved in numerous international conflicts since European settlement. If your ancestors fought for Australia, or migrated to Australia because of conflict in their homeland, you may wish to explore these conflicts in greater detail. The State Library of Victoria has map resources which enable you to pinpoint the location of battles, locate towns or regions where your ancestor/s may have lived or been stationed, and discover how wars altered place names and national borders.

The following resources may be useful when researching an ancestor who fought in World War 1.

1. Trench maps. The library holds a number of trench maps from the battlefields in France and Belgium in World War 1.

We also hold a selection of maps of Gallipoli  from the time of the ANZAC campaign. To find these maps search the catalogue for Gallipoli using the maps tab. More extensive maps from the Gallipoli campaign are held at the Australian War Memorial.

2. Atlases. The library holds several atlases that focus on battles and battlefields of World War 1 including:

Atlas of the war contains detailed maps of Europe as it was at the beginning of the war, including some town plans. It also features maps of several battlefields in Belgium and France.

The western front at a glance : a large-scale atlas of the allies' fighting line in the west is a series of detailed maps of the Western Front.

Atlas of World War I contains maps of major battlefields, including a trench map of Gallipoli.

Daily Mail war panorama : 20 birds-eye views and maps of the world wide war from 1915 is a series of decorative maps showing parts of the Western and Eastern Fronts and Gallipoli. 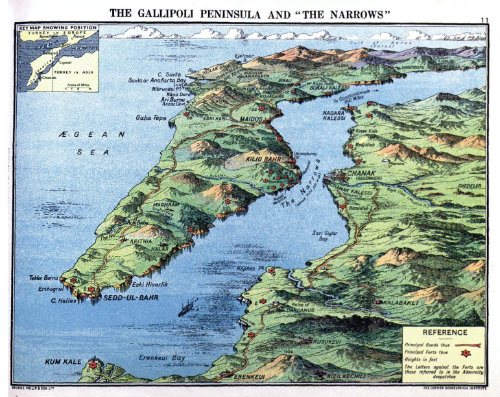 Gallipoli Peninsula and "The Narrows" from Daily Mail war panorama : 20 birds-eye views and maps of the world wide war

3. Online. A variety of scanned WWI maps contributed by other libraries can be accessed through the database The First World War. These include maps of battlefields, as well as large scale interactive maps showing changes to the various fronts throughout the war. Registered users of the library can access this database from home.

The following resources may be useful when researching an ancestor who fought in World War II.

1. Maps. The library holds a series of maps of New Guinea which are uncatalogued . If you would like to view these please submit a map inquiry detailing the part of New Guinea you are interested in and a map librarian can retrieve the appropriate material.

2. Atlases. The library holds several atlases that focus on battles and battlefields of World War II. The following atlases describe and map the major campaigns.

The Times atlas of the Second World War contains detailed text and accompanying maps of the major conflicts of World War II, including battles in the Pacific involving Australian troops.

The Routledge atlas of the Second World War features maps showing national borders before and after the war, maps illustrating major battles and locations of war graves around the world.