Places and locations sometimes have their names changed or disappear altogether.

The 1901 census showed the township of Hollybush to have 78 dwellings occupied by 538 people. Hollybush no longer exists. After the first World War, its wooden houses, which had been constructed to house miners, were transported to various soldier settlements in the western district.

So, to identify and track down an obscure locality, it can be useful to check the following resources:

The Victorian Register of Geographic Names, VICNAMES, holds more than 200,000 place and road names including landscape features such as mountains and rivers, bounded localities such as suburbs, towns, cities and regions, and physical infrastructure such as roads, reserves and schools.

Victorian places a website produced by Monash University, in association with the University of Queensland, includes the history of every town, city, suburb, village and settlement in Victoria with a population of over 200 people.

Place names of Victoria by Les Blake can be found on the open shelves at various locations within the Library.

Lost & almost forgotten towns of colonial Victoria by Angus B Watson can be found on the open shelves in the Information Centre and the Family History & Newspapers Reading Room.

Directory for cities, towns, boroughs, shires and districts in the colony of Victoria for ..., 1872-1878, on microfiche in the Family History & Newspapers Reading Room.

Place names in Victoria and Tasmania by A.E. Martin. (Online)

There are many towns, cities or regions in the world which have had different names at different times or have been known by different names by people from different cultural or linguistic communities. Official name changes often occur when political boundaries of states change.

In the course of your family history research you may come across a place name that no longer exists. The following checklist suggests resources of use when researching localities which have been known by more than one name:

1. Books of alternate and changed place names. Such as Place-name changes 1900-1991 and Alternate names of places: a worldwide dictionary both by Adrian Room.

3. Historical Atlases. Try world atlases such as a Times world atlas or the Andrees Handatlas. Alternatively, find atlases of specific countries or regions in our Library catalogue combining keywords relating to your area of interest and the word atlas. If you have a reference to a place name at a given date, look for an atlas published around that time.

4. Resources for researching Central or Eastern European localities. As well as trying the resources above, try these: 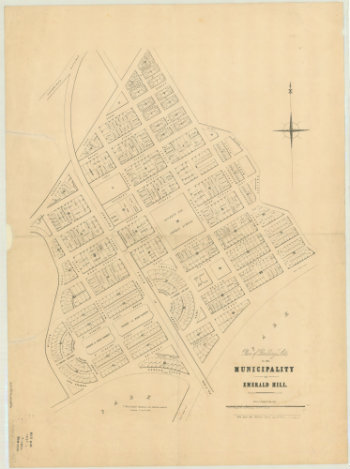 Plan of building lots in the Municipality of Emerald Hill