Bibliographies are useful for deeper research into whaling ships and whaling. See the following:

Contains a great summary about the whaling industry in Victoria. Bibliographic references from newspapers, scholarly publications and secondary sources related to whaling and sealing in the early years of Victoria's settlement.

The South Sea whaler : an annotated bibliography of published historical, literary, and art material relating to whaling in the Pacific Ocean in the nineteenth century compiled by Honore Forster

More south sea whaling : a supplement to The south sea whaler, an annotated bibliography of published historical, literary and art material relating to whaling in the Pacific Ocean in the nineteenth century compiled by Honore Forster

Two bibliographic resources for whaling ships and whaling in Australia, New Zealand and the Pacific in the 19th century, including sources for accounts of whaling voyages, works relating to whaling in the Pacific Ocean, fiction, academic dissertations, articles, and newspaper and periodicals.

Whaling ships resources in the Library:

Lists all the ships involved in whaling from 1800-1888 along the South Coast of Western Australia, from Cape Leeuwin to Eucla, and from the coast to 42 degrees south latitude. Arranged by year, then by name of ship in alphabetical order. Includes transcriptions of extracts the ships' logbooks.

These three volumes by A. G. E. Jones form a comprehensive history of the British southern whale fishery.

Volume 1 contains transcriptions and indexes to south seas departures, ‘speakings’ and arrivals from the commercial record of shipping in London at the time, Lloyd's List. Also included were entries for south sea ships from the Registrar-General of Shipping and Seamen's Registers of Shipping  and two short articles on the British Southern Whale and Seal Fisheries.

Volume 2 contains continues the work of listing and indexing ships involved in the trade from the various registers of shipping published by the ship owners and insurance underwriters. Accompanying the lists were indexes and lists of names extracted from the Admiralty Protections and further articles dealing with aspects of the trade.

Volume 3 contains the listings of cargoes for voyages of ships employed in the British Southern Whale Fishery which included nearly 2500 whaling and sealing voyages to the south seas between 1775 and 1859. It also includes an overview of the trade, a series of annual reviews by the author, a series of tables listing the price of the various oils in London, some contemporary statistical information and a chapter on the costs involved in outfitting a whaling voyage. There are indexes to ships and captains.

Combines the above title with Whalers out of Van Diemen's Land by the same author. Historical overview of whaling in Hobart and Tasmania.

Tasmanian ships registered 1826-1850 : full details of every ship enrolled by the Registrar of British ships at the ports of Hobart Town and Launceston compiled by Ronald Parsons

History of the American whale fishery by Alexander Starbuck

One of the standard sources for the history of the American whale fishery. It lists the names of American whaling vessels & their voyages, the captain, whaling grounds visited (including grounds in the Pacific, Indian & Southern Oceans) catch and date of departure and return.

Originally published in 1931. Alan Villiers was a noted authority on sailing ships. Chapters 9-15 deal with whaling, with a Tasmanian focus.

Information about whaleboats - the small, oared boats used to hunt whales around the world - from 1850 until the 1970s.

"There she blows": a narrative of a whaling voyage, in the Indian and South Atlantic Oceans, edited by Curtis Dahl

She was a sister sailor : the whaling journals of Mary Brewster, 1845-1851 edited by Joan Druett

Mary Brewster was a woman who defied convention and traveled on board ship with her whaling captain husband. She was the first American woman to pass through the Bering Strait into the Arctic Ocean.

The cruise of the "Gipsy": the journal of John Wilson, surgeon on a whaling voyage to the Pacific Ocean, 1839-1843 edited by Honore Forster

John Wilson's lengthy and detailed account of a 41 month voyage that covers the whaling grounds of the Pacific from the Cape of Good Hope to New Holland, eastern Indonesia, and the Sea of Japan, with landfalls in Honolulu, Guam, New Ireland and Copang. Of note for its contemporary ethnographic depictions of life in the Pacific Islands.

The captain's best mate: the journal of Mary Chipman Lawrence on the whaler Addison 1856-1860 edited by Stanton Garner

The diary of a wife who, with their five-year old daughter, accompanied her husband on a three-and-a-half year whaling voyage.

George Comer, an experienced and skilful whaleman, was a disciplined recorder of daily events during all his whaling cruises and a vigilant and interested observer of the Arctic environment and its native inhabitants.

William Dalton's manuscript journal of two whaling voyages to the South Pacific, one on the Phoenix (1823-25) and the other on the Harriet (1826-29)

To the Greenland whaling : Alexander Trotter's journal of the voyage of the Enterprise in 1856 from Fraserburgh & Lerwick

Two years in the Pacific and Arctic oceans and China, being a journal of every day life on board ship, interesting information in regard to the inhabitants of different countries, and the exciting events peculiar to a whaling voyage by James F Munger

Ebook avaliable. James Munger's 19th century journal of everyday life on board a whaling ship. Describes countries visited, whaling practices, and the goings on of the ship and crew.

A journal of a whaling voyage on board ship Dauphin, of Nantucket by Charles Murphey

This work recounts the rescue of survivors from the whale ship Essex (which had been sunk by a whale). It is unusual because the entire account is given in rhymed quatrains.

Hezekiah Pinkham, his jurnel 1793 - 1802, transcribed and explained by Rod Dickson

These are the log books kept by young Hezekiah Pinkham after he went to sea as a teenager to learn the art of whaling from his uncle, Captain Andrew Pinkham.

Captain W. B. Rhodes's journal of the cruise of the Australian records the experiences of a time when whaling in the Southwest Pacific was entering upon its most active period. A matter-of-fact account of day-to-day events which conveys the spirit of a dangerous and arduous way of life.

Travels in Oceania : memoirs of a whaling ship's doctor by Louis Thiercelin, translated [and edited] by Christiane Mortelier

French physician Louis Thiercelin made two voyages in the Pacific, 20 years apart, on Ville de Bordeaux and the Gustave. He provides a rare point of view – that of a well-informed, educated European who was neither a missionary nor a government official. While his ideas were limited by the ethnocentricity of the time, his commentary on the French and English colonisation of the Pacific is insightful and often critical.

The Library holds a large collection of whaling ship logbooks on microfilm. These logbooks give an indication of the events that can transpire over the course of a voyage as well as other items such as illustrations, poems, and even recipes.

The following resources act as finding aids for this collection.

American whalers and traders in the Pacific : a guide to records on microfilm edited by Robert Langdon

Where the whalers went : an index to the Pacific ports and islands visited by American whalers, and some other ships, in the 19th century edited by Robert Langdon

See below for a sample of the contents for a few of these items:

The complete list of logbooks can be found here via a Catalogue search. Please note that these are held on microfilm in the Manuscripts collection and require two business days' notice to order.

'South Seas' is a term used in many, particularly older, resources on whaling and whaling ships. It refers broadly to the world's oceans south of the Equator. It can also be used as a synonym for Oceania, or more narrowly for Polynesia or the Polynesian Triangle — the area bounded by the Hawaiian Islands, New Zealand and Easter Island.

Whaling in the South Seas 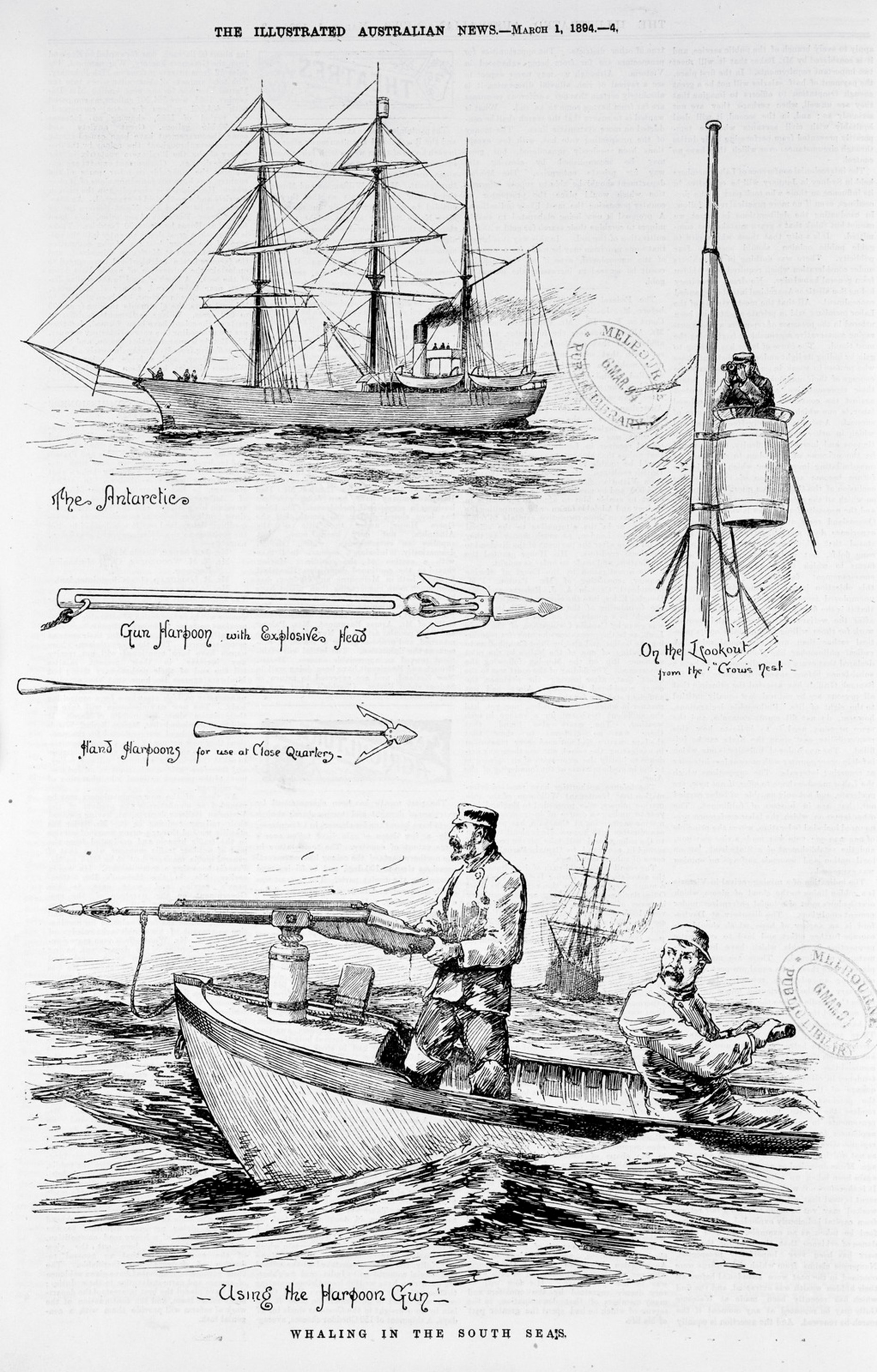 Whaling In the South Seas. Print published in The Illustrated Australian news; IAN01/03/94/4 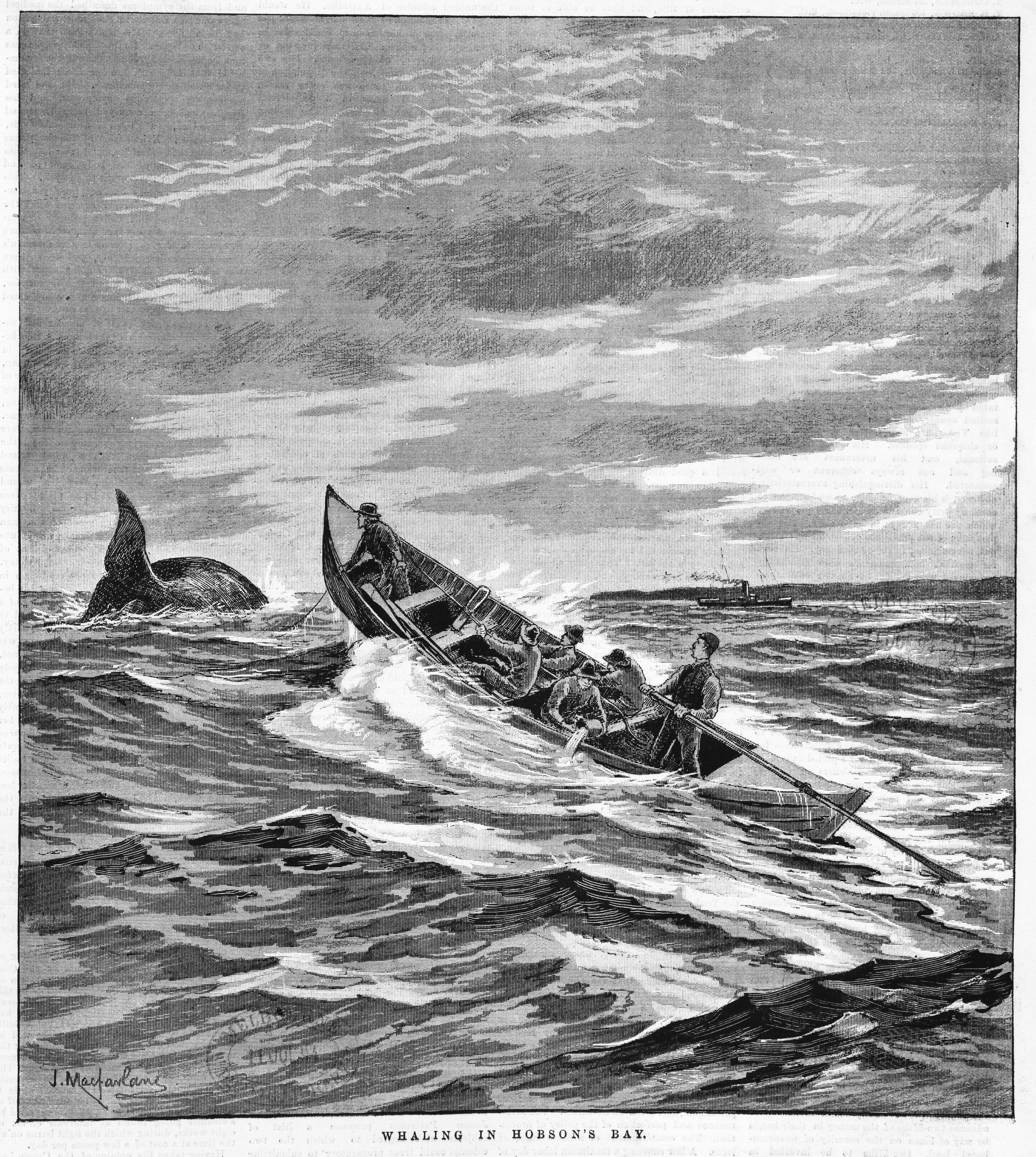 If you are looking for a particular whaling ship, keyword search using the name of the ship followed by the word "ship" or "whaling ship" in the following websites: