Bushfire has been part of Australian ecology from indigenous populations to colonial settlers and the present day, and it continues to exert a powerful influence of our national identity and imagination.

Many items in our collections bear testament to this relationship: 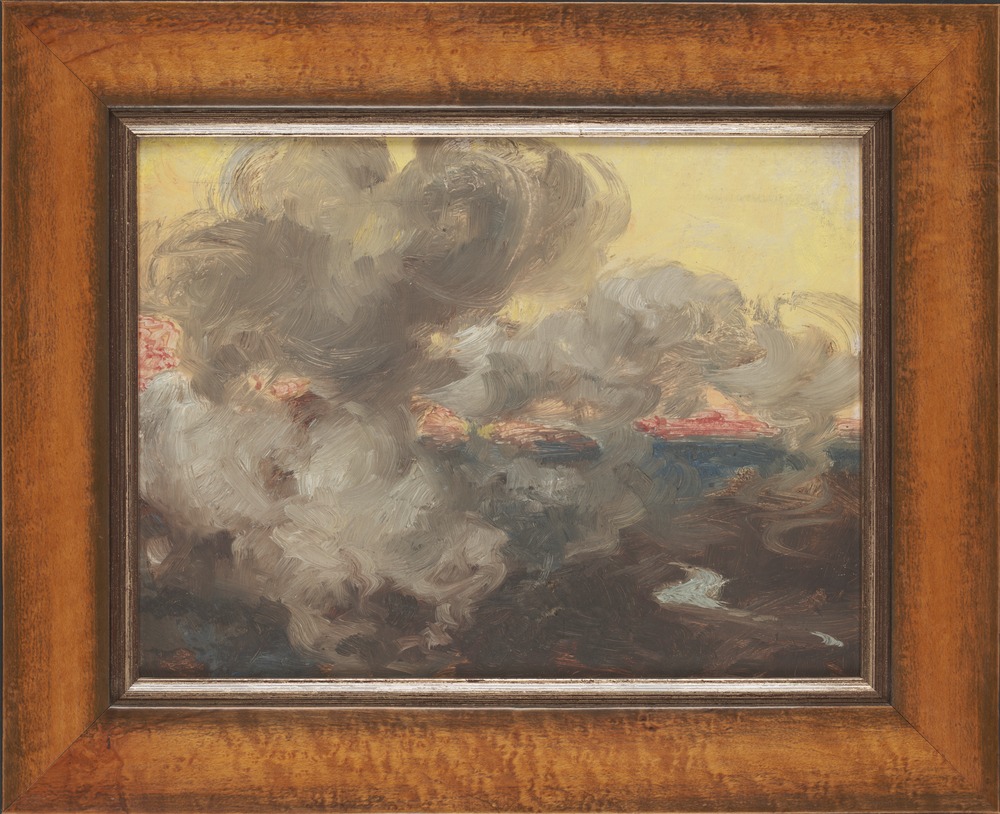 This small study of smoke may have been executed soon after the events of Black Thursday, in February 1851. Strutt's journal records that while he was at work at Thomas Ham's lithographic office in Collins Street, smoke and ash filled the streets, unsettling the city's inhabitants. In the days following the disaster, Strutt completed many sketches based on eyewitness accounts of the devastation. On his return to England in 1862, these preliminary sketches formed the basis of the famous narrative painting Black Thursday, February 6th, 1851, which is held in the Library's collection. [Regrowth in forest after a bushfire]. Rennie Ellis 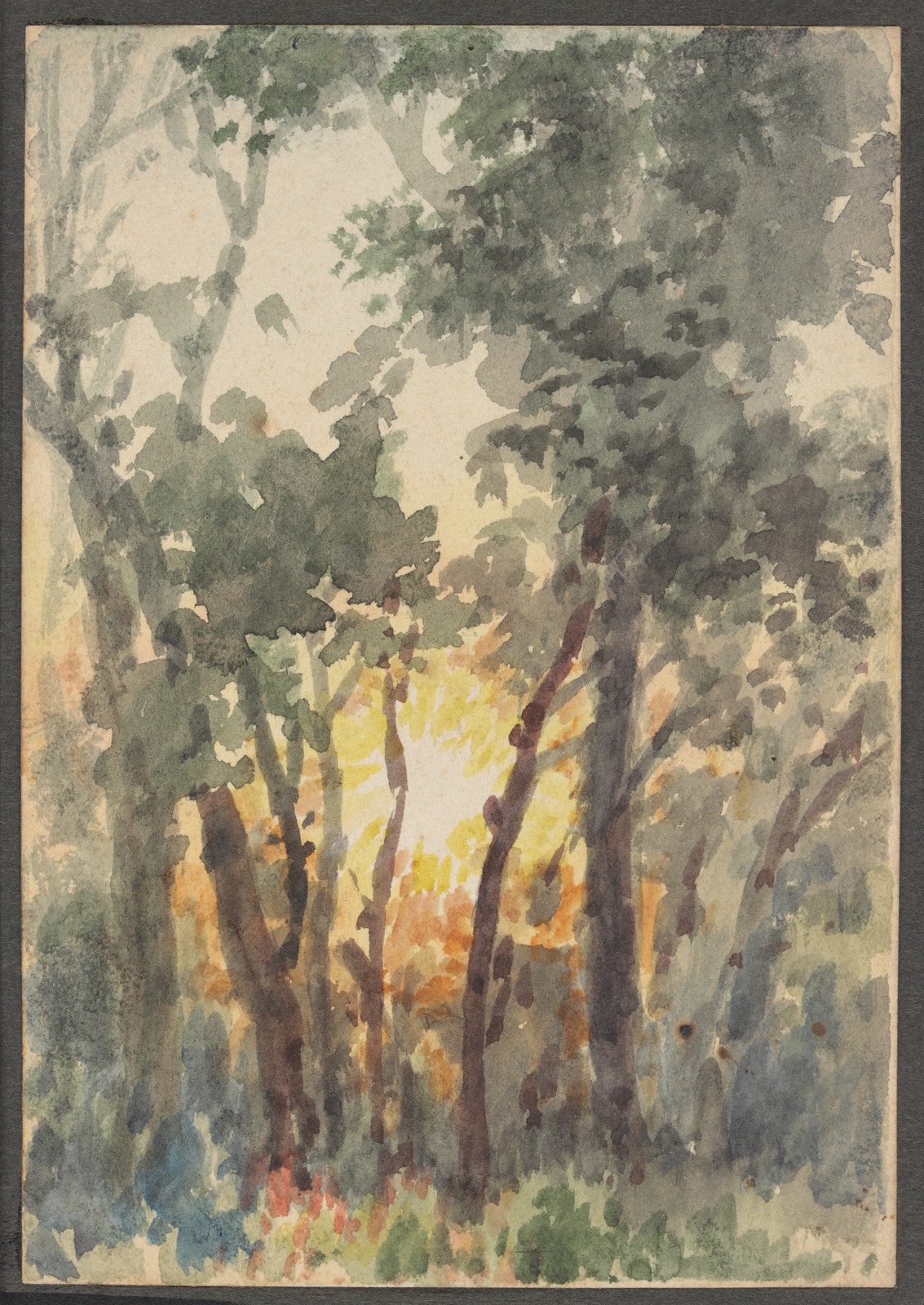 Looking through trees toward red gold glow of fire burning in the midst of the bushland. 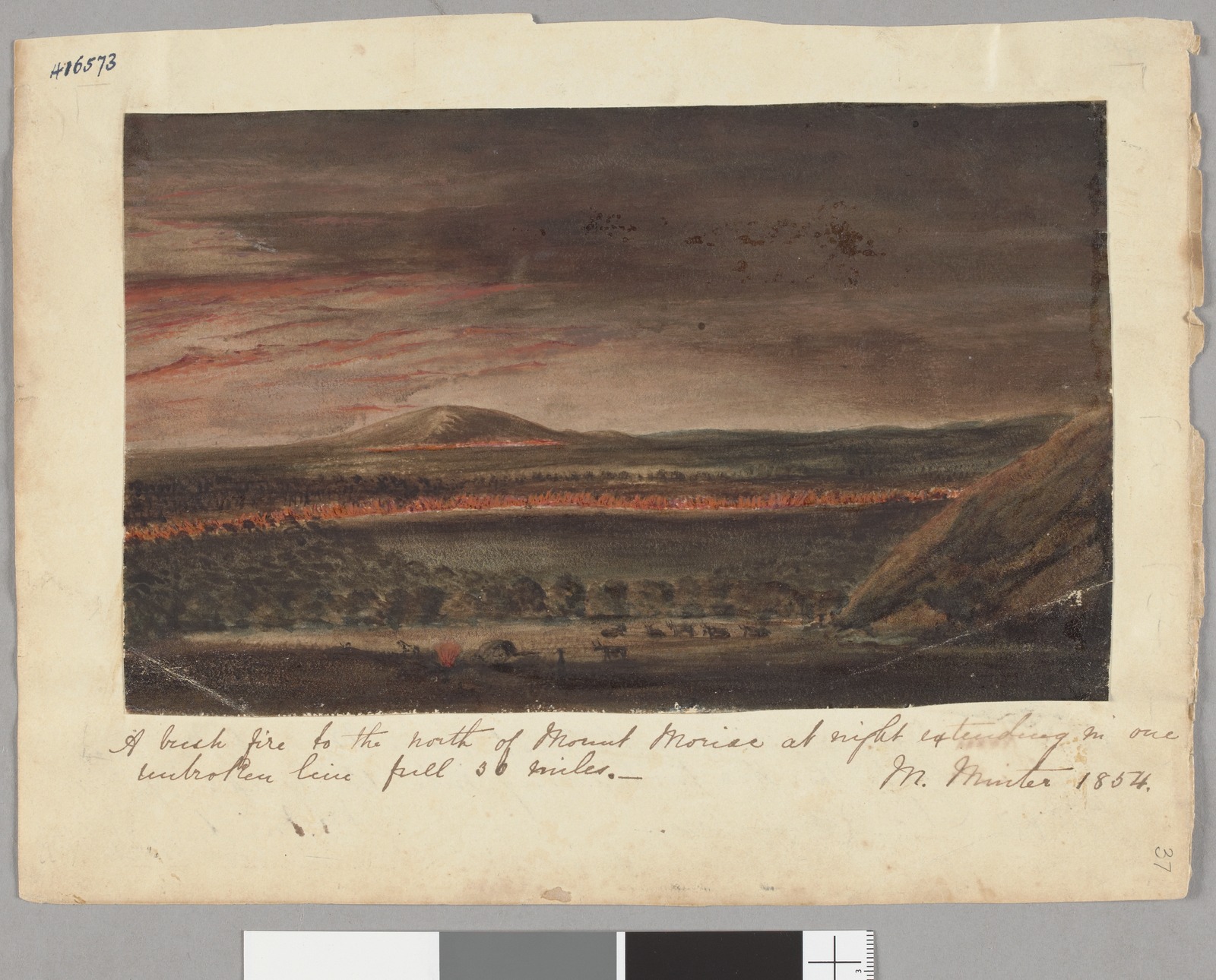 A bush fire to the north of Mount Moriac ... Michael Minter

"The wind changes! a run for life. A narrow escape from being burnt alive in the midst of hundreds of acres of dry bush. Another change of wind comes just in time to save us." 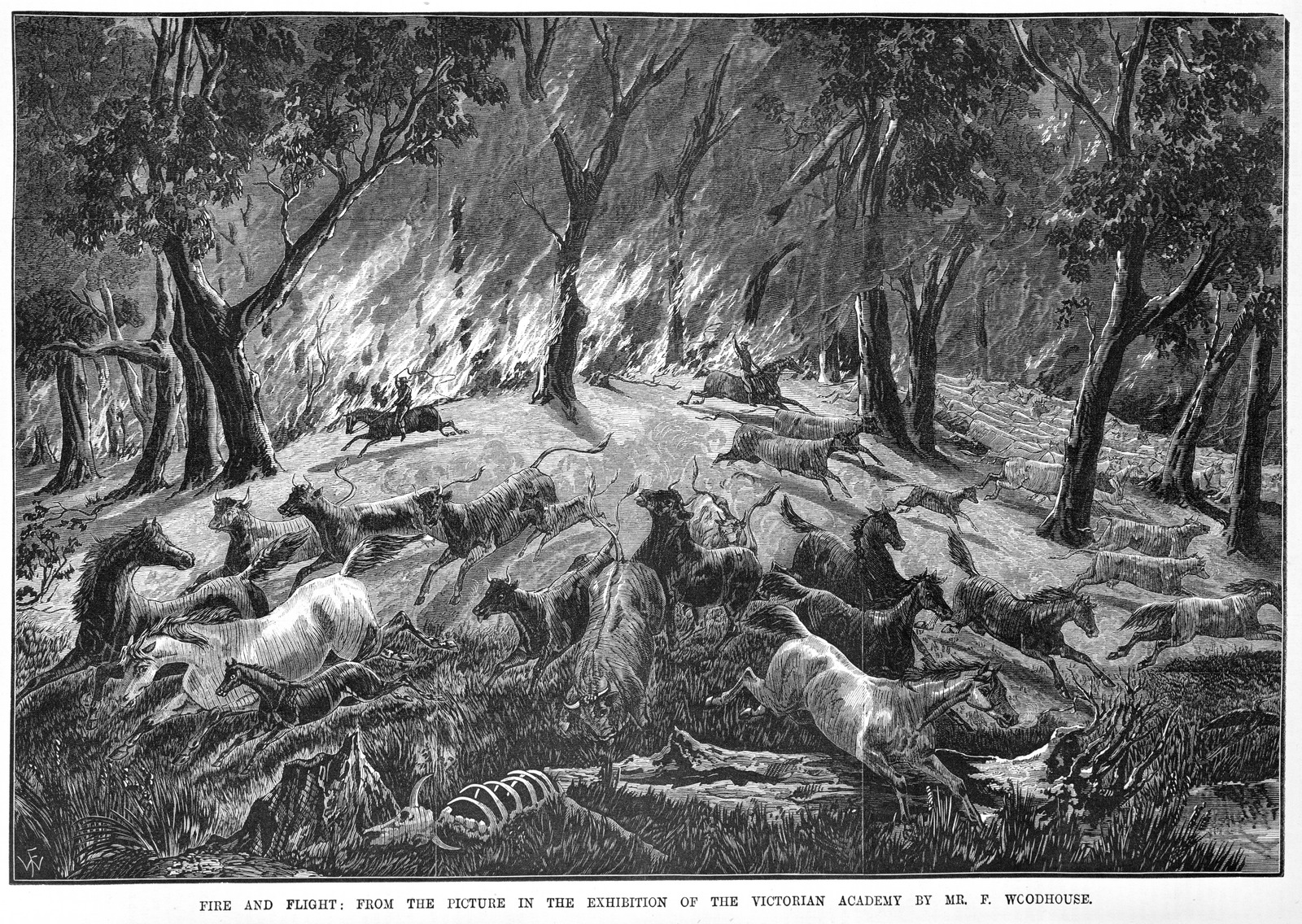 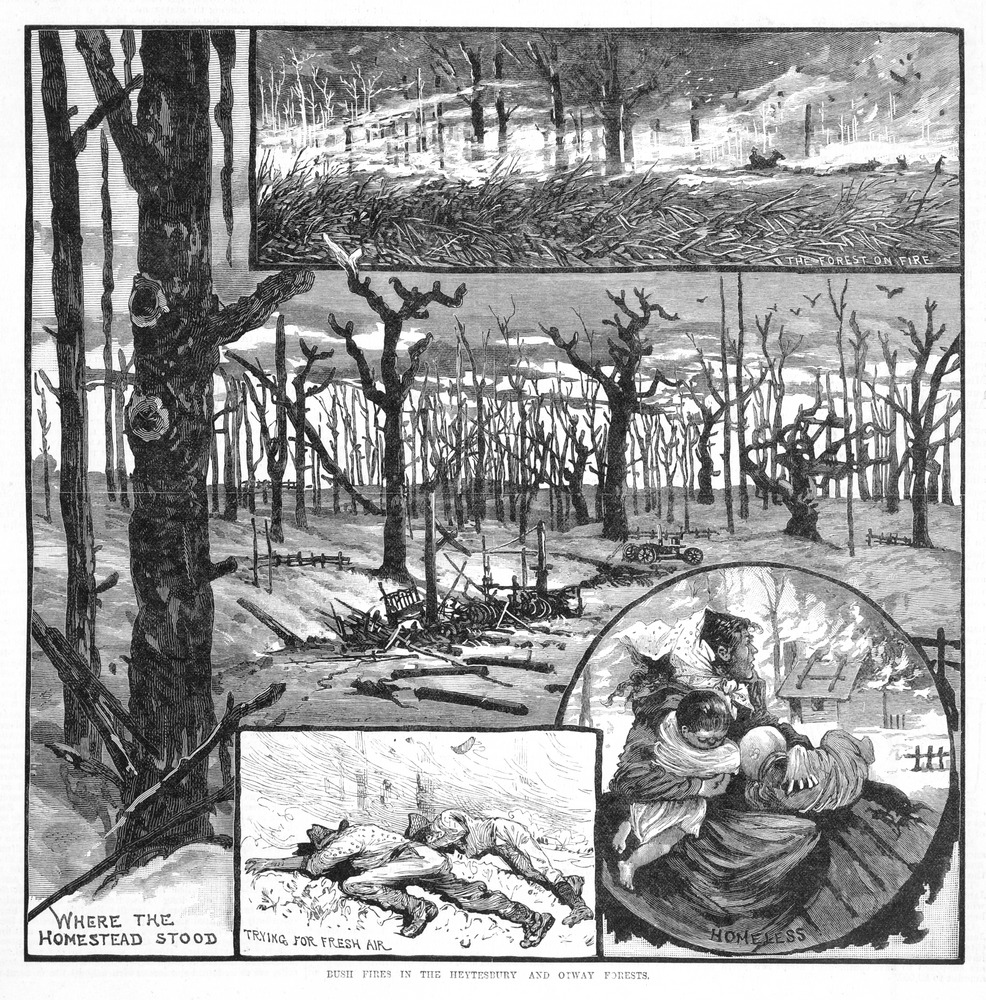 Bush fires in the Heytesbury and Otway forests.

Print published in the Australasian sketcher with pen and pencil. The forest on fire -- Where homestead stood -- Trying for fresh air -- Homeless. 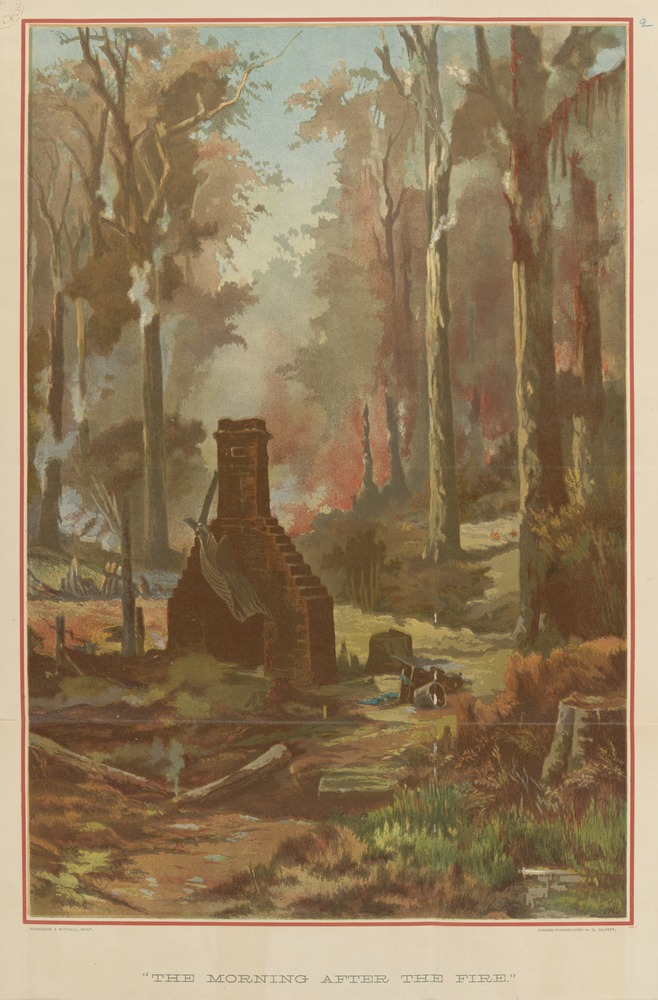 "THE MORNING AFTER THE FIRE."

The La Trobe Journal is State Library Victoria's scholarly publication. First published in April 1968, the journal features articles written by researchers who have drawn on the Library’s rich and varied collections as source material. 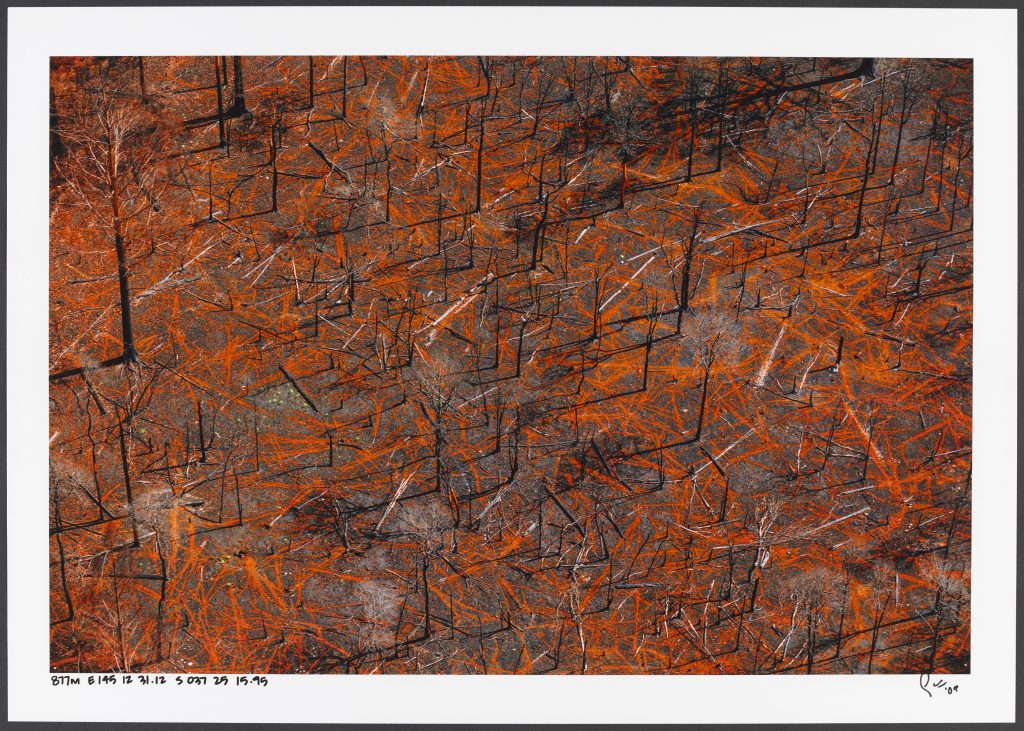 Bushfire and Aftermath: Remembering Black Saturday, 10 years on, through the work of John Gollings and Peter Wegner.

While stationed at Dimboola in the Wimmera, Nolan was involved in fire-fighting. Nolan described the experience: "last night was like the beginning of a world, not much thought in my own mind anyway of the damage it was doing, it had a volition of its own that overpowered such thoughts …. I was frightened in some way of the might."

"Every night that there is a strong North wind, we see “the Bush” on fire, and last night there was a burning about ¼ of a mile long a few miles from the town, which illuminated the heavens like a fine darkish sunset."

"The Bush was on fire in many places, some a mile wide, the smoke from which towering up obscured the sky and added to the hot wind. It is the grass and scrub that catches fire and it runs along the ground but only very rarely sets fire to a tree. It merely blackens the trunk. A thunder storm and the wind dropping, it dies away…"

"The wind changes! a run for life. A narrow escape from being burnt alive in the midst of hundreds of acres of dry bush. Another change of wind comes just in time to save us." Sketchbook no. 3. (28) Charlie Hammond