The Library has a range of books, newsletters and pamphlets relating to chess clubs and the results of tournaments. Searching for 'chess tournaments Victoria' in the Library catalogue brings up a variety of resources regarding Victorian tournaments, including historically significant collections such as the papers of the Melbourne Chess Club, from 1866-1984.

We hold newsletters and magazines produced by:

Australia has a range of local tournaments and regular state and national tournaments. The Australian Chess Federation is a member of FIDE, and is comprised of the state chess associations.

The title of Grandmaster is the highest title that a chess player can be awarded (not including World Champion). The title is awarded by FIDE, the world chess organisation.

Australia has previously awarded the title of Australian Master, however the title is no longer active. 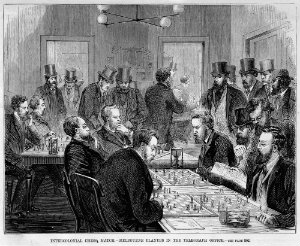