History of the MV Anderson Collection

The M.V. Anderson Chess Collection is based on the personal collection of Magnus Victor Anderson (1884-1966), a Melbourne accountant and keen chess player. Initially Anderson started his collection as a player’s working collection, but as his collection grew he also began to collect the early chess works that now give his collection such historical depth.

In 1955 Anderson offered his chess books to the then Public Library of Victoria. At that time he had a collection of about 1,500 books. Anderson himself looked after the collection – he added to it, catalogued it, and answered requests for games. By the time he died in 1966 the collection numbered over 6,000 volumes.

The collection was further developed by Mr Ken Fraser, Chess Librarian at the State Library between 1971-1992. Fraser's connections with the chess community in Victoria allowed for a great deal of Victorian material to be deposited and preserved during this period.

Highlights of the collection include:

Precursors to chess originally flourished in India sometime prior to the 6th century AD. As chess players travelled, the game was remodelled and often renamed (e.g. it became known as shogi in Japan). When Arabs conquered Persia, the game was introduced to the Middle East and Europe. By the 11th century, the game was widely known throughout Europe.

Around 1475 the most significant changes during the recorded history of the game took place.  A weak piece originally called the mantri, later known as fers (wise man or minister), was displaced by the queen, and the aufin (elephant) by the bishop.  The power of these new pieces made time of greater importance: one indifferent move in the opening phase might subject a player strong attack – and the study of openings began.  Previously the pawn could be promoted only to the lowly fers: now it could become a queen.  Most of the endgame knowledge garnered in the preceding history of the game became obsolete.

It was in the second half of the 19th century that modern tournament chess developed. The first official World Chess Championship was held in 1886, and took place in the USA. The world chess organisation, FIDE, wasn't established until 1924. In 1927 FIDE organised the first Olympiad and the first women's championship.

Major events in the history of modern chess include the 1956 "Game of the Century", which pitted the eventual winner, a 13 year old Bobby Fischer against the 26 year old Donald Byrne.

Many significant matches involve the development and use of technology. The Automaton Chess Player, or Mechanical Turk was an 18th century chess playing machine, which was exhibited between 1770 and 1854, when it was destroyed by fire. The 'automaton' was revealed to be a hoax, as the machine had a human chess player hidden inside, directing the moves. For more information, the Library holds the book The Mechanical Turk, on shelf in the the Chess Room.

The first computer to defeat a human in chess was the MANIAC I computer, which played Los Alamos chess in 1956 against a novice player.

In 1999, Kasparov played an online chess game where he competed against the world team, which had more than 50000 participants playing in consultation and deciding moves by voting. After a period of four months, Kasparov won the game. The book Behind deep blue can be found in the Chess Room.

You can find more information on computer chess on shelf in the Chess Room, including Chess and machine intuition, by George W. Atkinson, and Openings by computer, by Roy Twombly and Chales Elliot.

Victoria has had a long involvement in the game of chess.

The first Melbourne chess club was established in 1851, however only lasted a few weeks. According to chess historian Robert Brooking, a second club was created in 1855, and folded two years later (p.5, Care for a game: the story of Melbourne Chess Club). Chess clubs were also formed in country Victoria during the 1850s, in Ballarat (1856), Geelong (1855), Ararat (1859) and Beechworth (1875).

In 1866 an Open Handicap Tournament was held. 32 players entered and played over a period of months, before a Mr. Andrew Burns won in the final three game match (p.5, 'Seventy Years of Victorian Chess'). From this tournament came the idea of forming a new Melbourne chess club. On July 21 1866, the first meeting of the Melbourne Chess Club as we know it was held, and attended by 17 chess players.

Interstate telegraphic matches were first played during the 1860s and 1870s, managed by the Melbourne Chess Club.

To find books about chess in Victoria, search the Library catalogue. 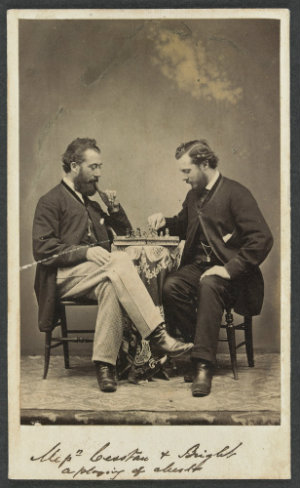 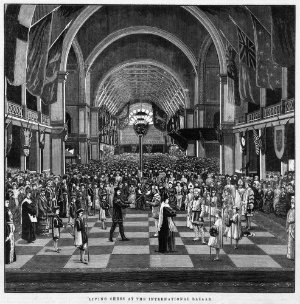 From the Pictures Collection 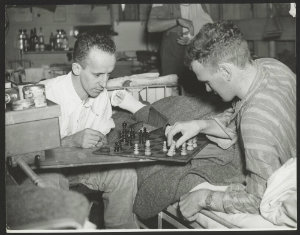