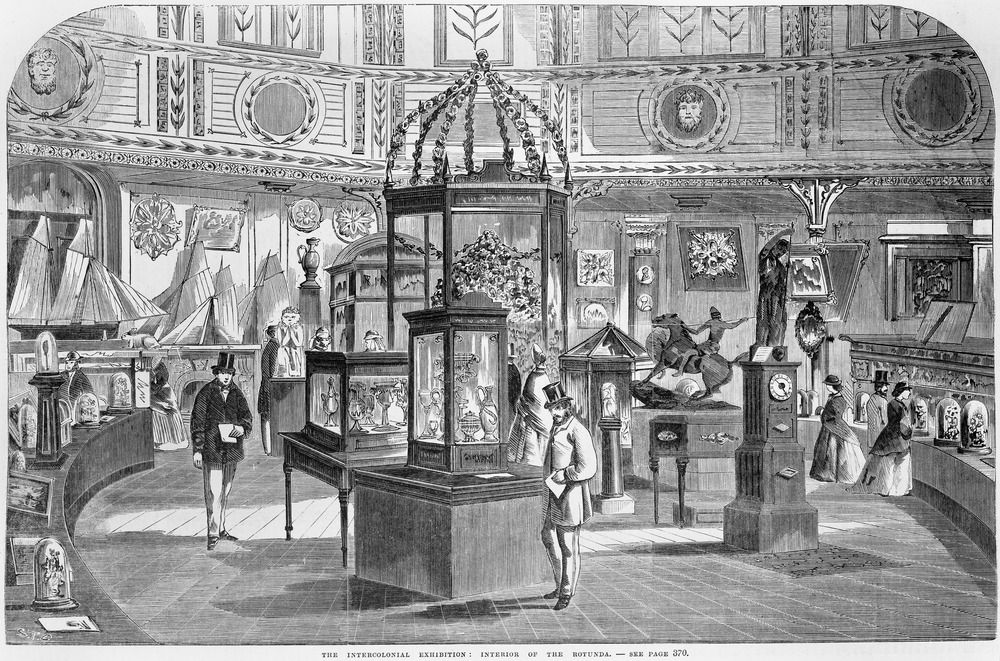 The Intercolonial Exhibition: interior of the rotunda, IMP27/11/66/372

This exhibition brought together exhibits to assist in the selection of items to be forwarded to Paris for the Exposition Universelle. For the first time the Australian colonies came together. There were exhibits from Victoria, New South Wales, Queensland, South Australia, Tasmania, Western Australia and New Zealand, as well as from New Caledonia, Mauritius and Netherlands-India. Each colony was assigned a specific area, or 'court' for their display. Victoria's included separate courts for the Sandhurst (Bendigo), Ovens & Murray, and Wangaratta districts. The exhibition opened on 24 October 1866 and closed on 23 February 1867.

Intercolonial Exhibition 1866: official catalogue (2nd edition)
There is no index to individual exhibitors and winners are not listed. There is a separately paginated 'Official catalogue advertisers' section indexed by name of business. The few small line drawings in some of these advertisements are the only illustrations in the catalogue.

Guide to the Intercolonial Exhibition of 1866
The author of this companion to the official catalogue includes a description of his walk through the exhibition. While official publications merely list items, he describes some of the exhibits seen. There is an index by type of exhibit. For example a check under 'Billiard tables' takes us to page 20 where we learn that those from Mr Alcock's manufactory are constructed of slate from near Castlemaine and blackwood timber from Tasmania but the cloth is not local.

Intercolonial Exhibition of Australasia, Melbourne 1866-67: official record...
Exhibits are listed by state with a separate listing for Fine Arts. For prize winners check the Reports and Awards of Jurors section. There is no index to exhibitors or prize winners. There are no illustrations.

Opening of the Exhibition, The Argus, 25 October 1866, pages 5, 6 and 7. As well as reporting on the opening of the exhibition, the article goes into lengthy detail about the displays in each court.

Official distribution of prizes, The Argus, 14 February 1867, pages 1-3 of the supplement.

Intercolonial Exhibition 1866: awards of the jurors
Arranged by category of exhibit. Each category lists the jurors, then lists those who won awards. There are no illustrations and no index to winners.

Intercolonial Exhibition 1866: official catalogue 1st edition
This first edition of the catalogue starts with the statement that it 'has been compiled from the applications sent in by intending exhibitors. Many of the goods have not yet been received, corrections will be made in the second issue'. The listings of exhibitors does differ from the digitised 2nd edition (see above). There are no advertisements, and no illustrations. There is no index to exhibitors.

The Paris Exhibition opened on 1 April and finished 1 October 1867.

Paris Universal Exhibition, 1867
This is a catalogue of exhibits from Victoria. The catalogue begins with 3 essays then lists exhibits from Victoria on pages 1-26, and medals and prizes awarded on pages 27-28. For example under the exhibits listing for Class 26 'Leather and Straw Work, Fancy Articles and Basket Work' there is an entry for 'Colonel Champ, Pentridge - cabbage-tree hats made by male prisoners at the stockade'.

Victoria in the Paris Exhibition, The Argus, 16 September 1867, page 5. List of prize winners in the Victorian Court at the Exhibition. 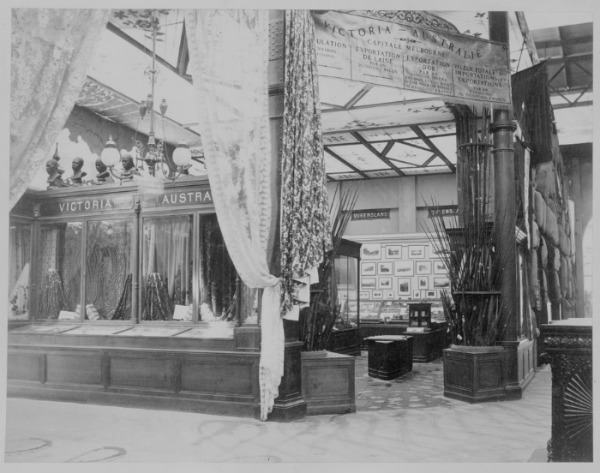 Entrance to the Victorian Court at the Exposition Universelle, Paris, 1867, left-hand view, H3910

Complete official catalogue, including the British and all other sections: English version, translated from the French catalogue, published by the Imperial commission. 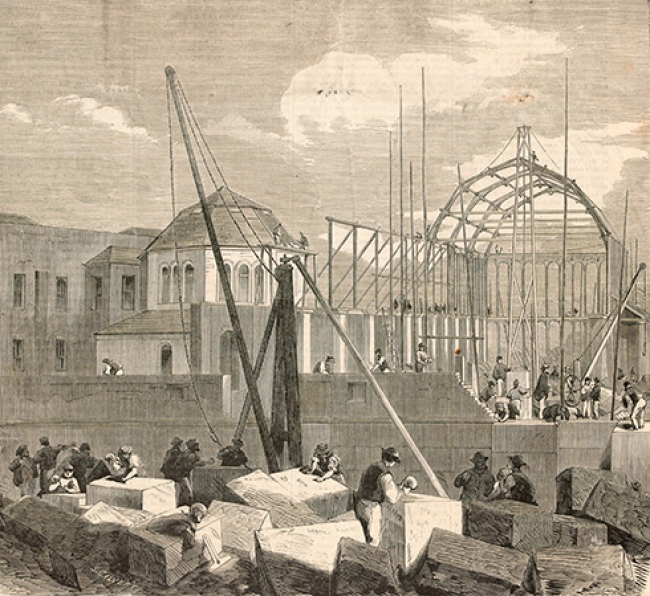 The works at the Intercolonial Exhibition Building, Melbourne, IMP27/08/66/317

The architectural firm of Reed & Barnes designed two main exhibition buildings, the Great Hall and the rotunda, for the 1866-67 Intercolonial Exhibition in Melbourne.

Search our catalogue to find many more digitised images of the buildings and exhibits.

500 medals were produced to be awarded to winning exhibitors at the Intercolonial Exhibition. The medal was designed by prominent sculptor of the period, Charles Summers.

Aboriginal portraits at the Melbourne Exhibition

The Commissioners of the Intercolonial Exhibition presented the Library with 106 photographs of Aboriginal Australians who lived at Coranderrk. The photographs were taken by Carl (Charles) Walter, and were exhibited in the Fine Arts Court at the Exhibition.