For Victoria there is no separate catalogue, but a record of Victoria's participation in the exhibition, as well as all other exhibits and exhibitors, can be found in the Official record and The official catalogue of the exhibits.

The book Visions of colonial grandeur provides a useful illustrated introduction to the history of this exhibition. It also showcases the fine and decorative art collections purchased from the exhibition by John Twycross, which are now managed by the Melbourne Museum.

The official catalogue of the exhibits: with introductory notices of the countries exhibiting (2 volumes)
Includes the catalogue for the arts exhibitions.

Catalogue of the special show of dairy and other produce of a perishable character, and pot-grown plants, cut flowers, fruit, and vegetables
Held in the Great Hall of the Exhibition, on Friday and Saturday, 19 to 20 November 1880.

Special catalogue of the International Wool Show
Held in the Great Hall and the Central Avenue of the Exhibition, January 1881.  Includes an introductory essay 'The Australian wool trade'. Prize winners at the start, and jurors remarks at the end of each listing of exhibitors.

Catalogue of exhibits shown at the Melbourne International Exhibition 1880 with explanation published by the Melbourne Branch of Her Majesty's Mint.

Catalogue of pictures, drawings and art objects lent to the Royal Commission for the Australian International Exhibitions
Queen Victoria appointed a Commission to promote the success of the exhibition, and lent some of her paintings and allowed reproductions to be made of some objects of regalia from the Tower of London.

Floor plan of the exhibits, which were arranged by country of origin. 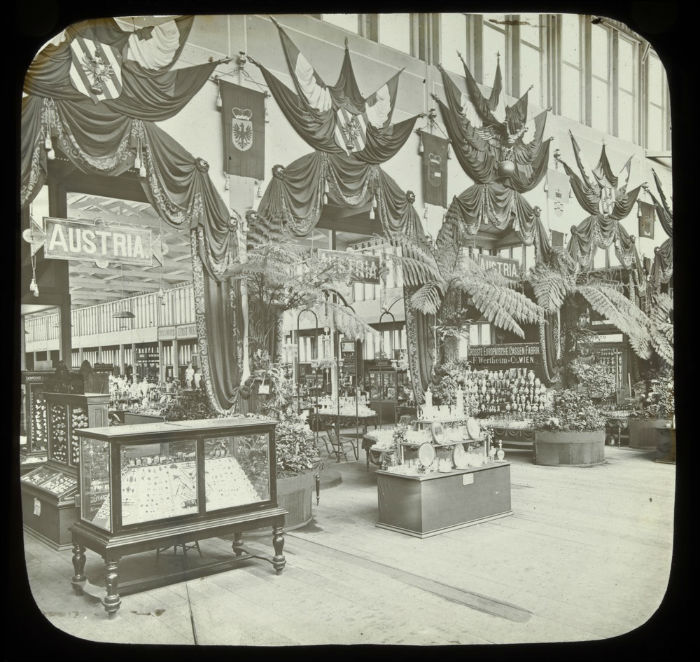 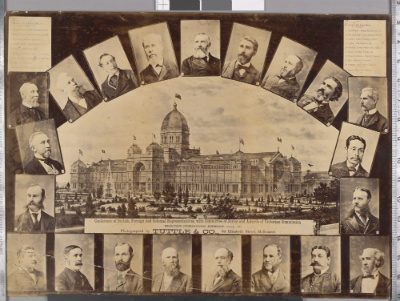 British, Foreign and Colonial Representatives, with Committee of Juries and Awards of Victorian Commission, H33926

Major exhibitions were organised and presided over by representatives from around the world. Sometimes there are portraits of the organisers, like in the example above. Visit this image's catalogue record for a list of names of the British, foreign and colonial organisers for the 1880 exhibition. You can also download a high resolution copy of this image.

The Visitors' register of Melbourne International Exhibition, 1880 includes 16,000 names of people who visited the Exhibition. A total of 1.3 million visitors attended the event. The names are not in A-Z order, and have not been transcribed, so finding a particular name may be quite difficult.

The register is housed in the Library's Manuscripts Collection. Due to its large size and vulnerability to damage, access is supervised and by appointment only. Telephone 03 8664 7009 for details.

To find out what visitors thought of their experience, read Marg McCormack's article 'The 1880 Melbourne International Exhibition visitors' book' in the La Trobe Journal, No 56, Spring 1995, pages 40-41.

The Royal Exhibition Building in the Carlton Gardens was built for the Melbourne International Exhibition of 1880/81.