This exhibition was prepatory to the Philadelphia Exhibition the following year.  It opened 2 September 1875 and closed on 16 November 1875. There were exhibits from Victoria, New South Wales, Northern Territory, Tasmania, South Australia, New Zealand, New Caledonia, and Netherlands-India.

Official record: containing introduction, catalogues, official awards of the Commissioners, reports and recommendations of the experts and essays and statistics on the social and economic resources of the Colony of Victoria
Begins with a general introduction and the catalogue of exhibits followed by reports and awards of the jurors, pages 159-404. The rest of the publication consists of essays on various aspects of the colonies. There are no illustrations and no index to individuals.

Account of the Victorian Exhibition of 1875 an 8 page supplement in The Argus, 3 September 1875.

A number of images of this exhibition are available to view on the Library catalogue. 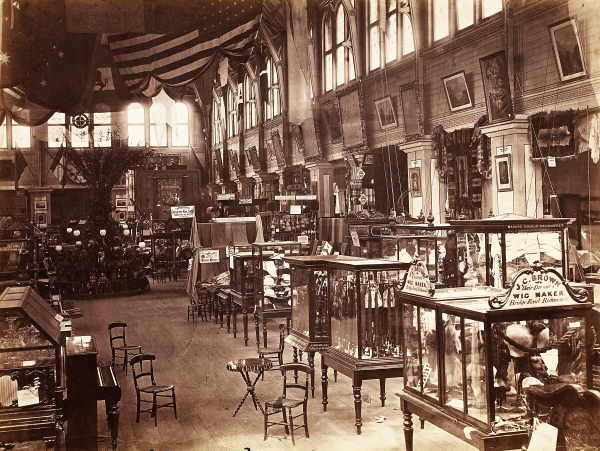 Official record: containing introduction, catalogues, official awards of the Commissioners, reports and recommendations of the experts and essays and statistics on the social and economic resources of the Colony of Victoria
The second separately paginated half of this volume is a Catalogue of exhibits from Victoria at the Philadelphia Centennial Exhibition 1876. There is an index to exhibitors pages 1-3. This index does not include the names of growers with facsimiles of various types of fruit displayed in the Horticulture Department. Catalogue of exhibits in each class pages 5 to 255.

A descriptive catalogue of rocks, minerals, & fossils, illustrative of the geology, mineralogy & mining resources of Victoria, Australia: exhibited for and on behalf of the Government, under instructions from the Hon. William M'Lellan, M.P., Minister of Mines