The system of granting patents in the Australian colonies is based upon British law, and can be traced back to the English Statute of Monopolies of 1623, and the first "modern" patent law enacted in in 1852.

Prior to the colonial states enacting their own legislation in the mid 19th century and forming their own Patent Offices, inventors applied to for patent registration and protection.

When legislatures were established in the Australian colonies, people could apply (petition the parliament) for a patent to be granted by the Governor of the colony, by way of a Private Bill. The first of these was South Australian Private Act No.1 of 1848, granted to Andrew John Murray of for "An improved windlass", on , for a period of 10 years.  Several other Private Acts were granted in ; and several Private Acts for patents were granted in .

The first patent act in , other than private acts, was introduced into in 1852 (coming into force on ).

proclaimed its first Patent Act in 1854, with the length of the grant being for 14 years

) was transferred to the Commonwealth from 1 June 1904 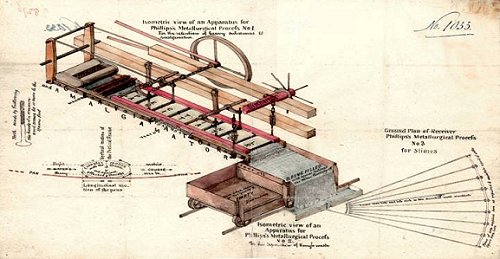 An invention for "An improved apparatus for separating metallic ores from gangues, and the metals from ores and gangues"

Monopolies for inventions have been in existence since the beginning of the 14th century.  The first Patent Law was enacted in Venice in 1474.

The first patent for an invention was in Italy in 1421 when a three year grant was given to Filoppo Brunelleschi for "some machine or kind of ship", for a period of three years.

The Senate of Venice granted several monopolies to foster new ventures and invention, and numbered over 100 by 1550.

The Venetian system was confirmed by statute in 1474, the first patent law, giving an inventor exclusive rights for ten years and imposed fines for infringement.  It stipulated that the Government was free to use the invention.  This system spread to other European countries and to England.

Patents were being granted in France and Germany during the 1500's.

A basic principle of modern patent law, that an invention must be fully disclosed so as to benefit society, was introduced by King Henry II of France in 1555.

The description of the patent has become known as the specification.

Patent laws were enacted in:

In England, the first patent was granted in 1449 to John of Utyman, and covered the manufacture of a type of stained glass (used in the windows of Eton College).

Monopolies continued to be granted by the Crown, and during the reign of Queen Elizabeth I (1558-1603) there were many abuses of the royal privilege.

On his succession in 1603, James I revoked all previous patents and introduced a new system which produced the first "modern" patent in 1617.

Because of continued abuse, Parliament passed the Statute of Monopolies in 1623, which protected new inventions for a 14 year period.

This was the beginning of the current patent system with the longest period of continuous operation.

Patents granted prior to 1852 were not numbered and not published, though the details of some were printed in journals, such as the Repertory of Arts. Publication of British patents began in 1852, with 14,359 patents granted up to that date being published in the 1850's, beginning with Number 1/1617.

The first patent acts in the Australian Colonies, were private acts.

Many inventions have resulted in economic and social change, for example:

Improvements in combined cultivators and seed sowers. Patent number 4655 of 1912. Inventor: Alexander Fraser. Agent: Hugh Victor Mckay. You can find the full specification on the IP Australia website, using the AUSPAT database.  The AUSPAT format for the patent number and year is 1912004655.  You can search AUSPAT with a quick search, structured  search or advanced search.

In the United States, the first patent was granted by the Massachusetts Bay Colony in 1641 to Samuel  Winslow for a method of making salt.  Of the original 13 colonies, only North Carolina did not grant any patents.

In 1787 the United States Constitution gave Congress the power to grant patent rights.

The first American patent granted under this act was on 31st July 1790 to Samuel Hopkins for "making Pot and Pearl Ashes".

American patents from 1790 to 1836 were unnumbered and were known as "name, date patents".

Under the 1836 act, the first numbered patent was issued to John Ruggles for a new design for traction wheels for steam locomotives.