This guide will help you to discover information about the history of the State Library of Victoria's buildings, development, and collections.

The guide lists significant articles, books and websites that focus on the history of the Library. You might like to start with:

The guide highlights older material that may otherwise be difficult to locate. To access recent published information about the Library use our research tools, especially our databases, which include many journal and newspaper articles.

The Melbourne Public Library was established in 1853. Library Trustees were appointed and they immediately announced a competition to design the building. The competition was won by Joseph Reed, the architect of many of Melbourne's notable buildings. Under his design the Library buildings were to be built in several stages.

The first Library building opened in February 1856, during the Victorian gold rush. It was decided that 'admission to the Library should be free to all persons over 14 years of age, without any letter of introduction or guaranty' (Armstrong, p.4). Library users also needed to have clean hands.

The Library was envisioned as a 'great emporium of learning' (Barry, p.13).

The Library website includes a brief general history of the Library and a summary of its heritage architecture. 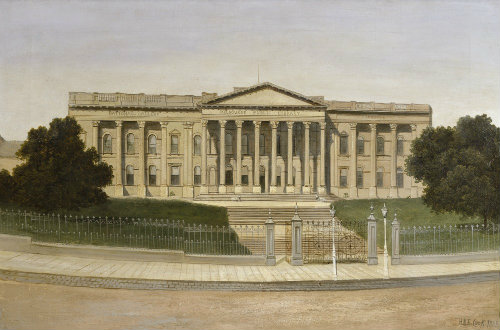 Evolution of the site

Watch this virtual 3D reconstruction to discover how the 1856 Melbourne Public Library has evolved into the contemporary State Library of Victoria, spanning an entire city block and bearing traces of more than 100 years of architectural influences.

This guide is based on History of the State Library of Victoria: a select bibliography by Fiona Jeffery.