The Hentys, Batman and Fawkner

Whalers were already established at Portland when Edward Henty arrived in November 1834, followed shortly after by his brother, Francis. Favourable reports of the Hentys' progress whetted the appetites of graziers in Van Diemen's Land leading to the formation of the Port Phillip Association.

One of its members, John Batman sailed from Launceston to Port Phillip in May 1835 to negotiate a treaty with the Aborigines by which means he claimed large tracts of land in the Melbourne and Geelong area on behalf of the Association's members.

The Batman party relocated its initial settlement from Indented Head to the Melbourne site on the Yarra River to discover that another party initiated by Launceston banker and businessman, John Pascoe Fawkner, had set up a settlement just below the Yarra Falls on 30 August 1835.

The resulting debate as to who was the founder of Melbourne has been carried on since the early claims of John Pascoe Fawkner to this title. However, as A.G.L. Shaw points out in A history of the Port Phillip District: Victoria before separation, the argument stems from "confusion between the idea of establishing a pastoral settlement in the Port Phillip District and that of establishing a village or township on the site of Melbourne." (p.55).

The following sources shed further light on the question:

A useful introductory source on the founding of Melbourne is

Below are a selection of resources relating to the major protagonists in the permament settlement of the Port Phillip District of New South Wales:

Contemporary and early accounts of the Batman settlement

The demand for wool, which was the original inspiration to settle the Port Phillip region, was also the driver for the subsequent pastoral expansion into the western and northern parts of the district. This led to the dispersal of population over a wide area resulting in clashes with the local Aborigines as well as unauthorised and unregulated occupation of land.

As a way of addressing the problem, in 1836 Governor Bourke introduced a grazing licence fee and established Land Commissioners, a system which was subsequently expanded by Governor Gipps and his successors.

Introductory information on the State Library of Victoria's ergo website

The following sources provide a general overview and access to biographical information and records of a selection of the significant names in Victoria's pastoral history.

The following two works provide brief biographical details of the holders of pastoral runs in early Victoria together with information on names, dates and ownership of the pastoral runs themselves:

Published records, diaries and accounts of pioneer settlers and pastoralists of Port Phillip provide an insight into the challenges and difficulties they faced. Below are a selection of these:

The development of responsible government

William Lonsdale was appointed Police Magistrate and Commandant in 1836 and Charles Joseph La Trobe was appointed Superintendant of the Port Phillip District in 1839. His powers however were limited as real authority rested in the Governor of New South Wales. 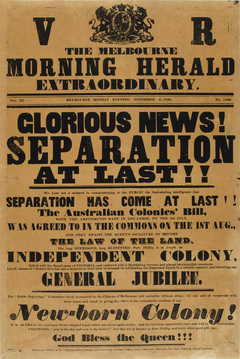 The push by the settlers of the Port Phillip District towards separation from New South Wales began as early as 1839 with pressure being maintained until their objective was finally achieved on 1 July 1851.

This subject is included in a number of the sources provided throughout this guide such as A history of the Port Phillip District: Victoria before separation whilst Port Phillip's separation on the State Libary's ergo website provides a useful introduction.

The petitions of the district of Port Phillip (Australia Felix) for separation from the territory of New South Wales.

The Library's ergo website provides students with information about formative events in Victoria's history and in addition to relevant links elsewhere on this page, includes information on the following topics related to the settlement of Port Phillip:

Women - female convicts and free settlers in the colony