is home to many indigenous nations who had inhabited the land for thousands of years prior to European discovery and settlement.

The continent of is first sighted by the crew on Captain James Cook's Endeavour voyage at Point Hicks, located in the far east of between and Mallacoota.

George Bass sails through and sighted the coast around Wilson's Promontory and .

In late December Captain James Grant in the Lady Nelson examines the coast of what is now Victoria sighting and naming such features as Portland Bay, Cape Albany Otway and Cape Schanck. Between Cape Otway and Wilson's Promontory the Lady Nelson crosses the bight that leads to Port Phillip but Grant does not detect the entrance to the harbour.

Grant returns in March to investigate the coastline between Cape Otway and Wilson's Promontory and survey Western Port.

After surveying Western Port in December 1801, Lieutenant John Murray, aboard the Lady Nelson, enters , explores and formally takes possession of the area for .

In March, French explorer Nicolas Baudin sights Wilson's Promontory in his vessel, Geographe. On 29 March, he leaves Wilson's Promontory and continues westwards to survey the southern coast of New Holland as part of a major scientific expedition ordered by then First Consul, Napoleon Bonaparte. Baudin charts coastline from Cape Otway to what is now known as Encounter Bay (SA), where he encounters Matthew Flinders, before continuing westwards.

Matthew Flinders continues in an easterly direction, reaching Port Phillip in the Investigator in April, six weeks after the departure of Lieutenant Murray. His survey of Port Phillip is the first detailed examination of the bay and surrounding country. In six days Flinders climbs Arthurs Seat, lands at Mornington and Indented Head, crosses Corio Bay to climb the You Yangs and examines Swan Bay and Queenscliff.

Acting-Lieutenant Charles Robbins, surveyor-general Charles Grimes and gardener James Flemming sail around Port Phillip Bay and along sections of the Maribyrnong and Yarra Rivers. In January and February Grimes carries out the first complete survey of Port Phillip.

A British convict settlement is established at Sullivan Bay near Sorrento in October 1803 under Lieutenant-Colonel David Collins but is abandoned shortly afterwards, mainly due to lack of water.

Pastoralist Hamilton Hume and sea captain William Hovell journey southwards from , cross the , and arrive at .

A convict settlement is set up for a brief time at Corinella in to protect the approaches to the bay from a perceived interest by French explorers in the area.

Charles Sturt leads an expedition along the , arousing interest in settlement of land to the south.

's first permanent European settlement is established at Portland by pioneer Edward Henty on 19 November. Up till then the area had been used by whalers as a base from which to carry out their activities.

Early 1835: The Port Phillip Association (originally the "Geelong and Dutigalla Association") is formed by fifteen of the leading colonists of Van Diemen's Land with a view to purchasing large tracts of land from the Aborigines on the unsettled South coast of Australia.

12 May: Farmer and businessman, John Batman and his party sail from Launceston on the Rebecca, entering Port Phillip on the 29th and anchoring at Indented Head.

6 June: John Batman, having sailed on to the mouth of the Yarra River, finds his way to a point which was probably Edgar's Creek (near Thomastown). He signs two treaties with the local Aborigines by which he claims 500,000 acres north of Melbourne and Corio Bay and 100,000 acres around Geelong and Indented Head.

8 June: Batman declares a point upstream from the 's mouth will be the site for a village, which was later to become the of today (Batman subsequently leaves his party at Indented Head and returns to Launceston).

29 August:  John Pascoe Fawkner's party which sailed from Launceston on the Enterprize on 12 July sets up a settlement on site just below Yarra Falls (Fawkner does not join his party until 16 October).

2 September: The party that Batman had left at Indented Head is lead by Wedge to the Melbourne site, arriving to find the Fawkner party already in place (Batman does not join his party until 9 November).

In June, then Surveyor General of NSW, Major Thomas Mitchell, crosses the Murray River into what is now known as Victoria. He continues in a south westerly direction, discovering the rich, fertile plains of western Victoria, which he later names 'Australia Felix' (meaning 'fortunate,' or 'happy'). Settlement of Australia Felix commences soon after.

Governor Bourke, concerned by the increasing number of illegal settlements at Port Phillip, appoints Captain William Lonsdale as Chief Agent of Government, Police Magistrate and Commandant for the Port Phillip Region. He takes up his duties in October.

Governor Bourke visits the Port Phillip settlement in March and approves Robert Hoddle's plan for a town which he names Melbourne.

The first overland mail service between and begins operating on 30 December.

Charles Joseph La Trobe is appointed Superintendent of the Port Phillip District and arrives in the colony on 30 September.

Public meeting held in Melbourne on 5 May to petition for separation from NSW.

Melbourne officially incorporated as a town on 12 August.

Public meeting in Melbourne on 28 November demands separation from NSW and appoints a representative to take a petition to England.

The Argus begins publication in Melbourne on 2 June (published by William Kerr and named Melbourne Argus until 1852).

Town of Geelong incorporated on 12 October.

Australian Colonies Government Act receives royal assent in Britain on 5 August, providing for the separation from NSW of the Port Phillip District, to be known as Victoria (as well as for the eventual self government of the Australian colonies).

An election held for the Victorian Legislative Council in September with the official opening taking place on 13 November.

Gold is discovered in Mount Alexander on 2 July and other areas in central Victoria soon after instigating a gold rush and a period of huge population growth and prosperity as immigrants arrived from all over the world to search for gold.

First years at Port Phillip: preceded by a summary of historical events from 1768 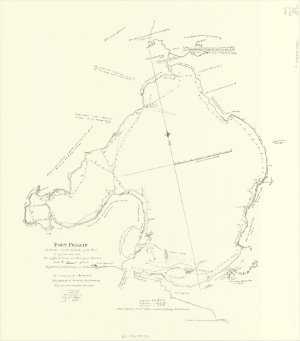 Trace the early days of Melbourne and the Port Phillip settlement, from Batman's treaty to Fawkner's Advertiser, through our online gallery. 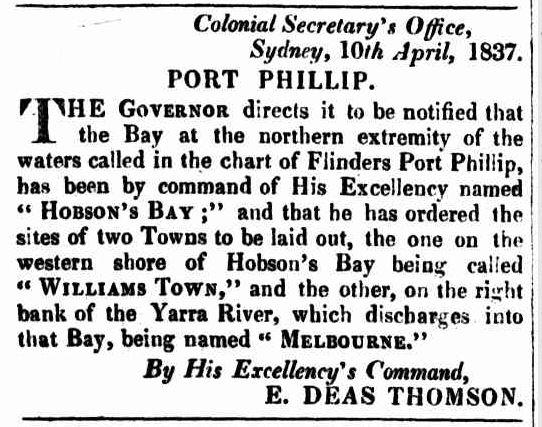 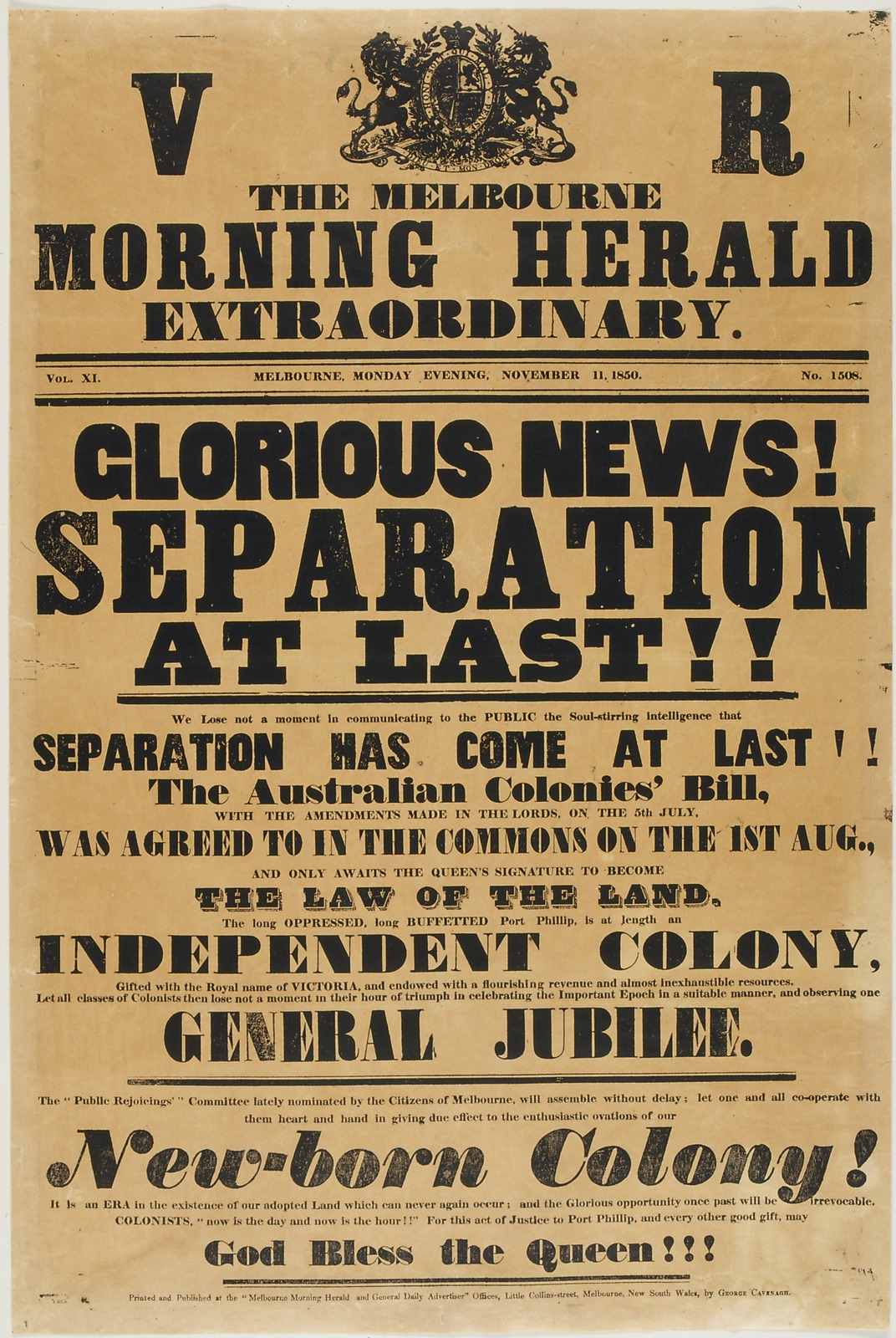 On the 11 November 1850, the people of Victoria, (then known as the Port Phillip District of NSW) received the news that the British Parliament had finally passed legislation allowing them to separate from New South Wales. Read all about it in our blog.