This tab helps you find critiques of the Alice books when they were first published to more recent versions, websites devoted to analysis, and print and electronic resources that offer a variety of theoretical approaches to these books.

Laura Millikan's website Curiouser and curiouser: the evolution of Wonderland was first established in 2011 and includes a timeline of critical interpretations of the Alice  books from their publication to the present day.

The Carroll section of the Victorian Web covers narrative analysis, imagery, and symbolism gathered from peer reviewed publications relating to the literature and culture of Victorian England.

To search our Catalogue for books of literary criticism, just enter some keywords in the search box. For example - Lewis Carroll Alice criticism as subject keywords.

Some relevant books include:

An early Freudian analysis of the Alice  books is 'Alice in Wonderland: the child as swain' by by William Empson in Some versions of Pastoral 1938, pp. 253-294.

Aspects of Alice 1972, edited by Robert Phillips is a survey of theoretical approaches to the Alice books

The most recent collection of essays of literary criticism is Alice beyond Wonderland: essays of the twenty-first century 2009, which includes the scholarly perspectives of women's studies, philosophy, photography, linguistics, textual studies and performance studies. This item is held at the Australian Catholic University.

Another item held at the Australian Catholic University Library is The place of Lewis Carroll in children's literature 2010 which looks at Carroll's word play and use of nonsense, Alice as fairy tale, and provides a nuanced consideration of Carroll's influence on world literature and culture to the present day. Especially interesting is the chapter 'Alice in the cyber-world of the 21st century, pp. 141-162.

In 1939 Virginia Woolf wrote an influential essay about Carroll which was published posthumously in The moment, and other essays in 1947 and a later edition in 1952. Here Woolf reflected on the child-like aspects of Carroll's psyche and observed 'the two Alices are not books for children; they are only books in which we become children'.

The Library subscribes to a range of databases and some of the best for literary criticism are listed below. Any item in the results list of a database search can be accessed within the Library by anyone, and outside the Library by Victorian registered Library users.

Our Library has a number of excellent newspaper databases, both historic archives and current newspapers. These may be  good sources for material on Lewis Carroll and his books.

Here is a review of Alice's adventures in Wonderland from the London Times , 13 August 1868 page 8 and an article from the Times Literary Supplement 5 December 1907 page 372 which discusses a number of publications that came out upon the expiration copyright for Alice.

Tenniel's Humpty Dumpty from 'Through the looking-glass' 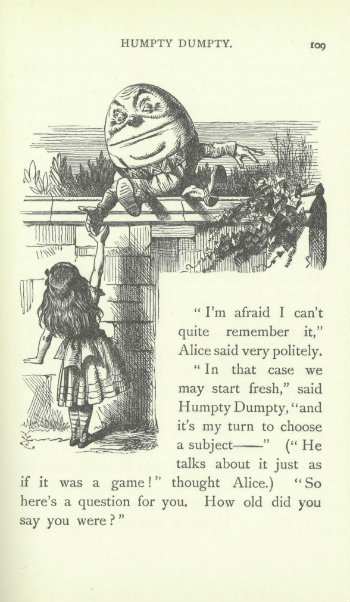 Queen Alice from 'Through the looking-glass' 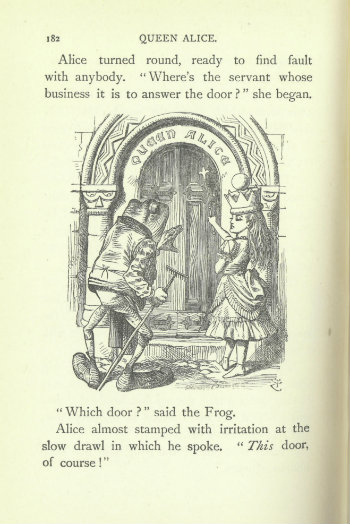 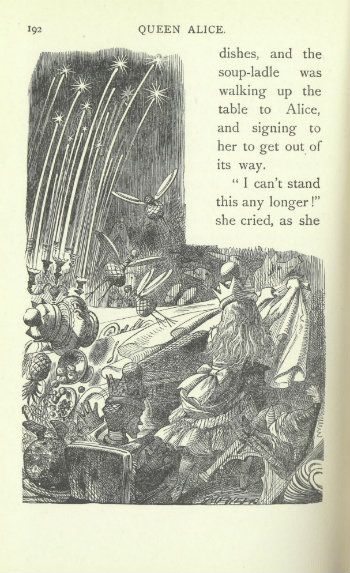