John Murray. H.M. Survey Vessel Lady Nelson and the discovery of Port Phillip. In 1800 the Lady Nelson was the first vessel to sail through Bass Strait from West to East, and in February 1802 she brought the first Europeans to Port Phillip. His comments, and those of Mathew Flinders who followed him, influenced the decision to establish Victoria's first official settlement at Sullivan Bay near Sorrento the following year.

James Flemming. A journal of Grimes' survey. The Cumberland in Port Phillip, January-February 1803. Late in 1802 Governor King of New South Wales sent the schooner, Cumberland, to survey King Island and Port Phillip to the north of it. The purpose of the survey was to establish whether or not the location might prove a suitable site for a new settlement.

The Cumberland's party included her commander Charles Robbins, the surveyor Charles Grimes, and James Flemming, a gardener. In January and February 1803 Grimes carried out the first complete survey of Port Phillip, during which his party discovered the Yarra River. Grimes' assessment of Port Phillip was not encouraging and more than thirty years were to pass before Melbourne was established.

Explorers played an important role in opening up the land and influencing the further settlement of the Port Phillip region. For example, in 1824, starting from NSW, Hamilton Hume and William Hovell reached Corio Bay but mistakenly concluded that they had reached Western Port. Their enthusiastic reports led to the shortlived 1828 settlement at Western Port (See Journey of discovery to Port Phillip, New South Wales by Messrs. W.H. Hovell, and Hamilton Hume in 1824 and 1825).

During his third expedition of 1835-6, Surveyor-General of NSW, Major Thomas Mitchell crossed the Murray River and proceeded south to Portland then travelled north east encountering on the way fertile land which impressed him so much that he termed the region "Australia Felix", thus inspiring subsequent settlement (See Three expeditions into the interior of eastern Australia : with descriptions of the recently explored region of Australia Felix, and of the present colony of New South Wales by T.L. Mitchell).

Following Mitchell the chief explorers of what is now Victoria were Angus McMillan and Paul Edmund de Strzelecki whose explorations encouraged the opening up of the Gippsland region (See Angus McMillan, pathfinder and In a dark glass : the story of Paul Edmond Strzelecki).

as well as the names of individual explorers.

There is also some good introductory information on the State Library's ergo website under the following topics:

In the new settlement of Port Phillip, surveyors were mainly responsible for deciding the location and shape of public facilities - roads, ports, bridges, reserves and access to water. They recommended where the future cities of Melbourne and Geelong should be located, and how all farms and townships should be laid out for sale.

The first of the sources listed below provides a good introduction to this topic along with a comprehensive selection of documentary material.

As many of the early maps of Victoria were prepared for Government purposes, they are largely held at the Public Records Office of Victoria, as part of their Historic Plan Collection (VPRS 8168).  We hold a copy of this collection on microfiche and these maps can be requested in the same way as other material from the maps collection.

The making of Melbourne in maps, compiled by Jeff Leeuwenburg, is a useful collection of maps documenting the development of Melbourne through maps. It includes a number of maps covering Port Phillip and Melbourne in the pre 1851 period such as the 1836 Arrowsmith map of the Port Phillip region which shows the area claimed by John Batman.

There are a number of maps relating to the early history of Victoria which can be viewed online: 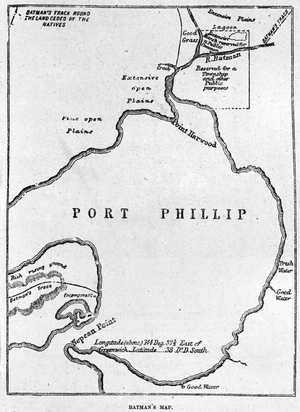 A wood engraving showing 'Batman's track round the land ceded by the natives'. It was published in a supplement to the Illustrated Australian news on the 1st of August, 1888 IAN01/08/88/Supp/2 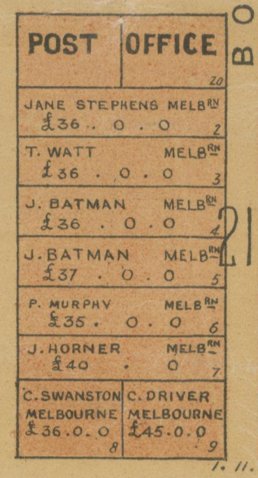 The Library's ergo website provides students with information about formative events in Victoria's history including:

Indigenous populations of Australia and the Torres Strait actively resisted British colonisation from the arrival of the First Fleet in 1788.   Massacres of Indigenous Australians were designed to eradicate opposition.  They were carried out secretly with few perpetrators brought to justice.

This site presents a map, timelines, and information about massacres in Eastern Australia from 1794 -1872.  It is the result of a project funded by Australian Research Council and undertaken at University of Newcastle.