Unlike most other countries engaged in World War I, conscription was not introduced in Australia. All the Australians who fought in World War I were volunteers. Visit the Irish in Australia tab for resources about Australia's Irish-born Anzacs.

At the outbreak of World War I in 1914, so many Australians voluntarily enlisted that men were turned away. By 1916 the scale of the slaughter was evident and the goals of the war less clear; as casualties rose, enlistments declined. Pressured by the British government to keep its regiments filled but aware of diminished public support for the war, the Australian Labor government under Prime Minister Billy Hughes floated the idea of conscription via two plebiscites held on 28 October 1916 and 20 December 1917.

Legally, the government was able to introduce conscription without this consultation, but it was aware that feelings on the issue ran high and bitterly divided the community. While many politicians favoured conscription, it was strongly opposed by many in the community.

Archbishop Mannix and the 'No' vote

Melbourne’s Archbishop Daniel Mannix was a key figure in the campaign against conscription. Born and trained in Ireland, he, like many others, did not support violent republican tactics but was radicalised by the swift executions of the Rising’s leaders in 1916 and became a fierce advocate of Irish independence. This was interpreted by many as Irish disloyalty to England and its echoes were felt throughout the 20th century: Irish-Catholic Australians were seen as disloyal citizens. Many of the Archbishop's anti-conscription speeches were reported in detail in the newspapers.

Other people, often women, were against war itself. An Anti-Conscription League was formed and the Women's Peace Army, a movement driven by the indomitable Vida Goldstein, mounted a fierce campaign against the war and conscription.

Generally the Labour movement was opposed to conscription, partly fearing the loss of men's jobs if they went to the War.  Some of the anti conscription leaflets also argued that conscription endangered the White Australia Policy.

People's reasons for being either pro or anti-conscription varied. Support for conscription usually originated from a sense of loyalty to Britain, which was seen as the Motherland, outrage at Germany's attack on Belgium and France, or out of fear for Australia's safety if Britain lost the war. Women were encouraged to shame their male relatives into joining the army.

The Australian Statesman and Mining Standard was published by Critchley Parker. The issue below, Australia's real scab, is pro-conscription and highly critical of Archbishop Mannix. Critchley Parker also wrote and published The Irish rebellion and Australian opinion which presents a strongly pro-British view of the Rising. 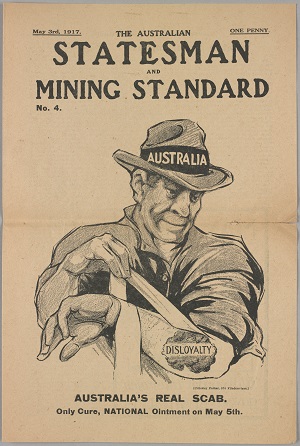 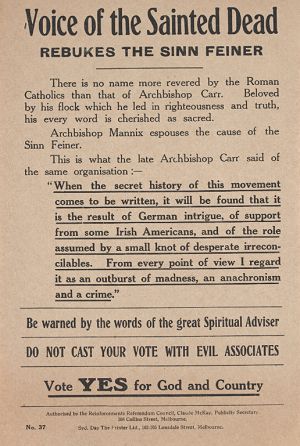 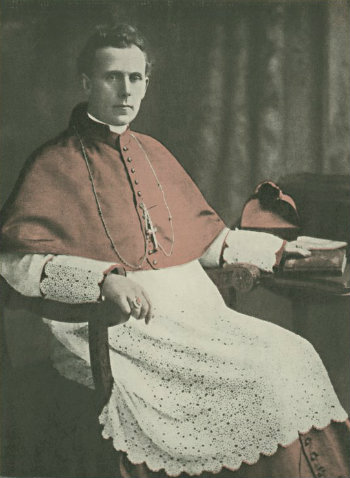 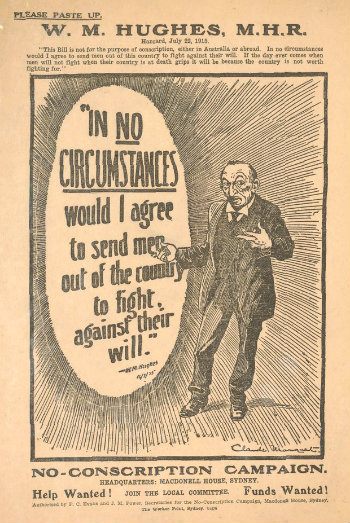 Poster refers to a comment made by Billy Hughes in Parliament in 1915. The date 22 July at top of poster is incorrect, it.was actually 16 July 1915 (as per the date under quote in poster).