Background: Ireland within Great Britain, and the Home Rule movement

Since 1541, the English monarch had nominally governed the Kingdom of Ireland, which retained theoretical legislative independence. In reality, the Anglo-Irish aristocracy controlled the country, to the detriment of the Catholic and non-Anglican Protestant majority. Tensions had erupted periodically prior to 1916, most notably in 1798 (around 10,000 killed in a failed rebellion), 1803 (led by Robert Emmet) and 1848 (the 'Young Ireland' rebellion).

In 1800, the Acts of Union legally joined the kingdoms of Ireland and Great Britain (England, Wales and Scotland). In response, the Irish Home Rule movement was born. Over the next 122 years, different definitions of the key concept were championed, from full republican independence to self-governance as part of the united British state. The hotly debated issue became known in Britain as the 'Irish Question'.

Irish home rule was also fiercely debated in Australia, a land with a huge Irish population and a vested interest in the political fate of a fellow member of the British Empire. Home rule advocates including John Dillon, John Redmond and Willie Redmond toured Australia several time to raise funds for their electoral campaigns - visit the Irish in Australia section of this guide for more detail.

The push for political independence in Ireland went hand-in-hand with increased interest in traditional Irish culture, a movement which became known as the 'Gaelic Revival' - visit the Gaelic Literary Revival section of this guide for more information.

In September 1914, a home rule bill that excluded six counties in northern Ireland (where Protestants feared a Catholic takeover under home rule) received royal assent from George V. It was about to be passed into law by parliament but the outbreak of World War I caused the British government to reconsider, postponing the establishment of Ireland's home rule indefinitely.

The frustration and sense of betrayal experienced by many within the Home Rule movement, fuelled by the rise of militant groups on both sides of the issue (see the Timeline tab for details), sowed the seeds of radical armed rebellion.

Read some views on home rule from the time:

What was the Rising?

The Easter Rising was an armed rebellion against British rule in Ireland, staged by several militant republican groups working together, including the Irish Volunteers, the Irish Citizen Army and Cumann na mBan. These men and women took up strategic positions in buildings around central Dublin and then repelled British attempts to remove them. They publicly read a proclamation of Irish independence from Britain (which was also printed and posted in the streets), though the rebellion itself had very little support in the community. The headquarters of the rebellion was Dublin's General Post Office, on O'Connell St.

The Rising began on Easter Monday, 24 April 1916 and lasted for just six days: the official surrender occurred on Friday 28 and all fighting ceased on Saturday 29 April. The rebels numbered around 2500; by the end of the fighting, there were around 20,000 British troops in Dublin.

The human cost was high: 458 were killed (mostly civilians) and around 2000 wounded. The Rising's 15 leaders were swiftly executed by the British for their actions. Their shocking deaths turned the tide of public opinion - everywhere in Ireland, except parts of its north -  towards supporting full, legal independence from Britain.

The Glasnevin Trust has published a necrology of 1916 online, which explores casualty numbers in detail.

Visit the Stories of 1916 project webpage to explore multimedia about the Rising, and to contribute your own family's story.

The BBC's multimedia website Voices 16 presents personal narratives from the year 1916, from those involved in and affected by the Easter Rising and the Battle of the Somme on the Western Front of World War One.

RTE have published footage and interviews from their archives relating to the Rising, including interviews with participants in the conflict, as well as publishing a website about the Rising and the commemorative events program in Dublin.

Immediate aftermath of the Rising

The Rising resulted in the destruction of large parts of central Dublin, as the British used incendiary bombs and heavy artillery to rout the rebels.

In the following weeks, 3000 men and women suspected of involvement were arrested, and some 1400 were charged and imprisoned.

The recently published special issue of the Irish Family History Foundation's online newsletter focuses on the families of the Rising's seven key leaders, the signatories of the Proclamation.

The leaders' rapid executions (preceded by brief, closed trials) shocked Ireland, Britain and the world beyond, even in the midst of the carnage of World War I - see the Australian conscription plebiscites tab for more detail on the impact of the Rising in Australia. The galvanising effect of these deaths in Ireland fuelled the ongoing struggle for independence; the dead leaders were characterised as martyrs whose sacrificial blood fed the growth of Ireland's independence.

The National Archives of Ireland's Easter Rising research guide provides access to a vast number of contemporary records relating to the Rising, including intelligence reports, trial records and and political reactions to the events.

Beyond the Rising: through civil war to independence

The end of World War I in 1918 coincided with an Irish general election, won by the nationalist party Sinn Féin (Gaelic for 'we ourselves'). Sinn Féin declared Ireland a republic, starting the Irish War of Independence (1919–21), sometimes known as the Black and Tan War.

Collins and de Valera led opposing factions in the resultant Irish Civil War (1921–23). Collins was assassinated on 22 August 1922, either by an anti-treaty fighter or a British agent. In 1923, de Valera and his anti-treaty army agreed to a ceasefire.

De Valera ultimately led his new Fianna Fáil party into the parliament (1927), and was elected President of the Elected Council (Prime Minister) after Fianna Fáil's general election win in 1932. He would remain in government (including periods in opposition) until 1973, when he retired aged 90, the oldest head of state in the world.

De Valera oversaw the legal establishment of the Republic of Ireland in 1948, cutting the last constitutional ties with Britain.​

This government body was established in 1947 to preserve unique memories and experiences of the Rising, the War of Independence and the Civil War before the generations involved died out. Some 1773 statements were recorded over ten years. This vast archive of personal and national narratives was kept confidential until the last recipient of a military-service pension who had provided a statement died in 2003. The statements are now fully digitised and freely accessible online.

The Library holds a large range of books about the Easter Rising. We also hold several ebooks and digitised pamphlets. Some online items may require a Victorian registration to access outside the Library.

These databases include a wide range of articles from scholarly journals. They are available in the Library and can be accessed offsite by registered Victorian users.

For reactions in Australia, search the Trove Australian newspapers database, using terms such as Irish Easter Rising. Use the options at left of the screen, and adjust keywords to focus your search further.

For an Australian Irish Catholic view of the Rising, see articles in the the Catholic papers, The Advocate  or The Tribune (Victoria), and The Catholic Press (Sydney).

Proclamation of the Irish Republic 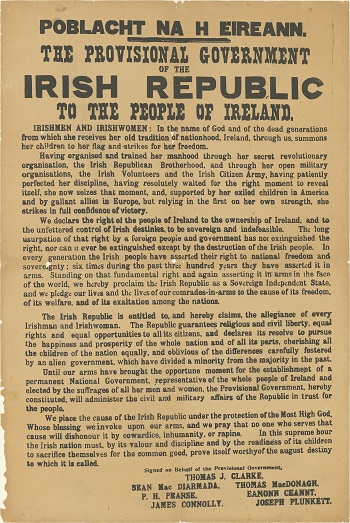 This facsimile was produced for the first anniversary of the Rising, at the instigation of Cumann na mBann members.

Posted around Dublin but quickly torn down by the British, it survives in even fewer numbers than the 1916 original.

Six days of the Irish republic 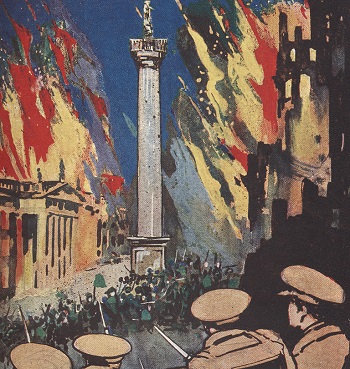 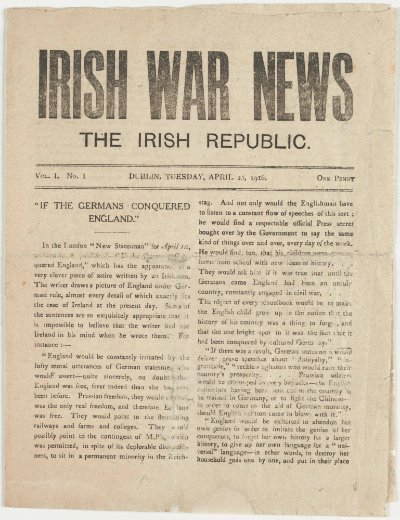 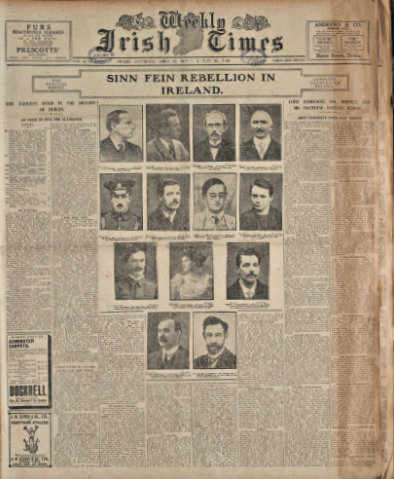