Ireland and Australia have been linked by immigration for over 200 years. By the time State Library Victoria opened its doors in 1856, one-third of Australia's settler population was Irish-born. For more information about Indigenous population numbers during this period, visit our research guide about Early Australian Census Records. Two of Victoria's most famous figures, bushranger Ned Kelly and his judge Redmond Barry, were both of Irish heritage. Barry founded the library, where Kelly's armour is now on permanent display.

Over 40,000 of the approximately 162,000 convicts transported by Britain to Australia between 1788 and 1868 were Irish. Use our research guide to explore the lives of your Irish ancestors:

Wherever they lived around their world and whatever their affiliations, 19th-century Irish people maintained a strong interest in Irish politics. This was especially the case in Australia: among the 40,000 Irish convicts transported here were participants in the 1798 Irish Rebellion, the 1803 Rising led by Robert Emmet, and the ‘Young Ireland’ revolt of 1848.  ﻿﻿

Australia in the 19th and early 20th centuries mirrored Ireland's social structure, in which the Anglo-Protestant minority occupied positions of power over the Catholic majority. Though tensions were (generally) never as violent as they were in Ireland itself, religious difference played its part in shaping relationships within Australia's Irish community.

This letter (below) from 'A true Ulsterman' was sent to Joseph Winter, editor of The Advocate Catholic newspaper in around 1890. The author sends a poem he has written entitled 'Why we celebrate the 12 July' (the Battle of Boyne), which concludes with the chorus "We hate the green and Catholic creed / And for old England's flag would bleed." 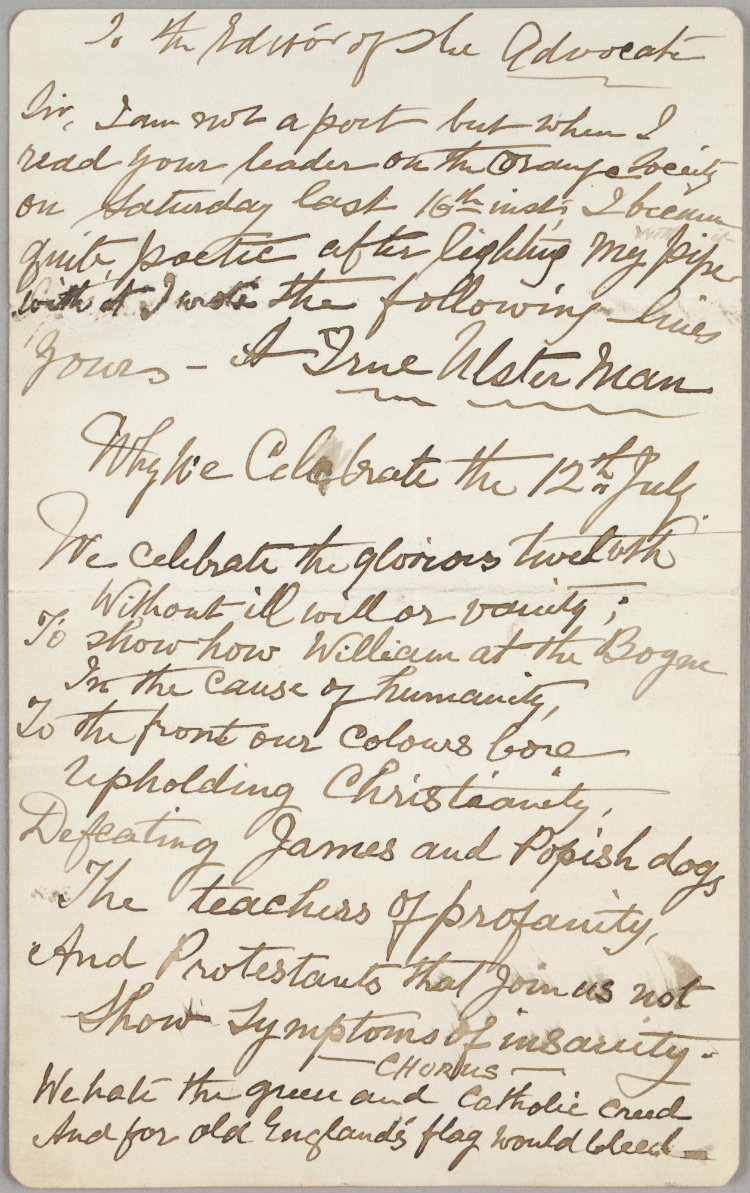 The issue of home rule exacerbated differences between Protestant and Catholic Irish-Australians:

Australia's Irish community was closely engaged with the Home Rule movement. In 1883, John Redmond, future leader of the Irish Parliamentary Party, which advocated home rule, and his brother Willie, a future MP, toured Australia and New Zealand, fundraising for their electoral campaign. Both married Australians while they were here, and Willie returned several times.

The library holds three photograph albums compiled by Dr Nicholas O'Donnell, a West Melbourne doctor, Irish nationalist and Gaelic scholar. O'Donnell and his friend Joseph Winter (see below) were intimately involved in organising the Redmond brothers' Australian tours. O'Donnell was also trained in photography by the well-known Melbourne photographer Charles Nettleton. The album that covers the years 1890-1912 includes photographs of the Redmonds and their wives during the speaking tours of Australia, and also includes photographs taken by Willie Redmond himself. 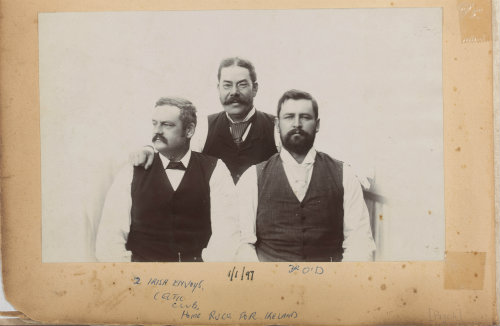 Dr Nicholas O'Donnell with John and Willie Redmond, 1 January 1897, on page 4 of the album.

Other resources about the Redmonds, their Australian circle and their tours include: 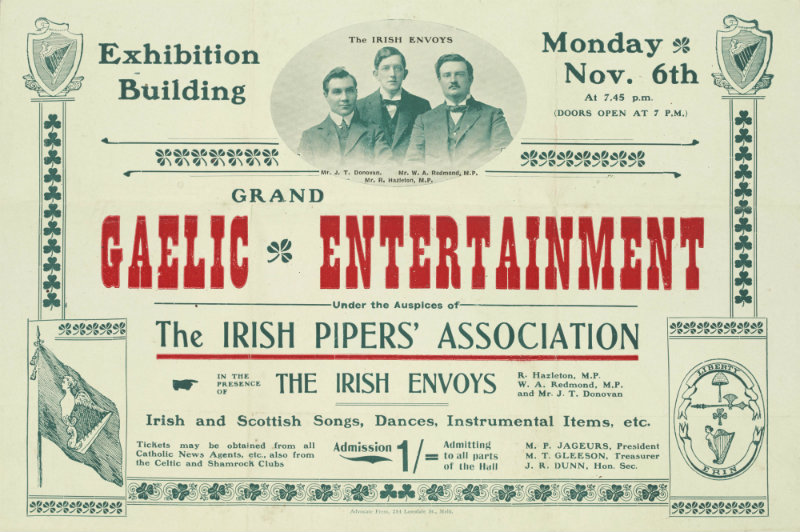 Joseph Winter and The Advocate newspaper

In 1868 his brother Samuel founded The Advocate as a Catholic weekly paper, and in 1871 Joseph took control. He remained its editor until his sudden death in 1915 aged 71. The Advocate has been fully digitised and is available through Trove.

Winter was the main organiser of John and Willie Redmond's home rule fundraising trips in the 1890s and early 1900s, and was John Redmond's groomsman at his wedding (to Irish Australian Johanna Mary Dalton, half-sister of James Dalton) in Sydney in 1883. 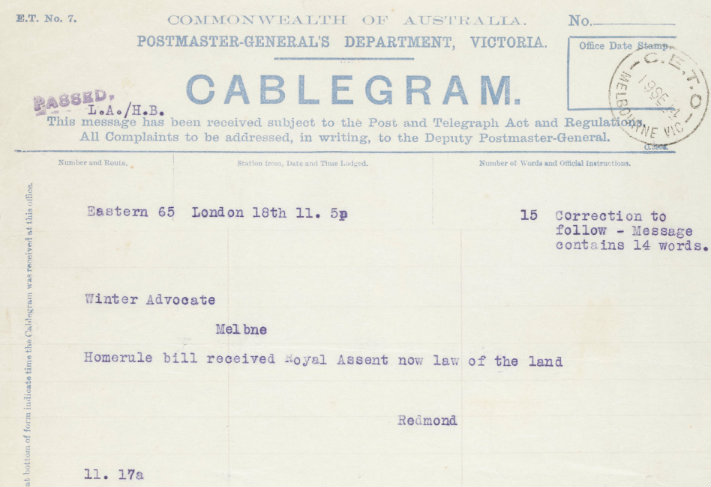 Archbishop Daniel Mannix and B A Santamaria

Daniel Mannix merged religion and politics like no one before him in Australia. He broke down many of the sectarian barriers that had kept Catholic Australians from positions of power, not least through championing quality education for Catholics to match that of the Anglo Protestant establishment.

Galvanised by the executions of the 1916 Rising's leaders, Mannix was also a vocal advocate of Irish independence. In 1920, he used the annual St Patrick's Day parade (17 March) to make a powerful public statement of support for that cause. Around 100,000 people lined Bourke Street to watch the procession of 20,000 Catholics and returned soldiers, many of whom participated to thank Mannix for his successful anti-conscription campaign in 1916–17. The parade was led by Mannix, 14 Irish-Australian Victoria Cross winners and 11-year-old Mary (known as Mollie) Harrington, pictured below at Mannix’s residence, Raheen, before the parade.

Mannix and controversial Catholic businessman John Wren made a film of the parade called Ireland will be free, which combined footage of the parade with sections about the Rising and its leaders. The Rising sections were edited by government censors before the film was screened in cinemas around Australia. The film is owned by Melbourne Diocesan Historical Commission and can be viewed through the National Film & Sound Archive of Australia. 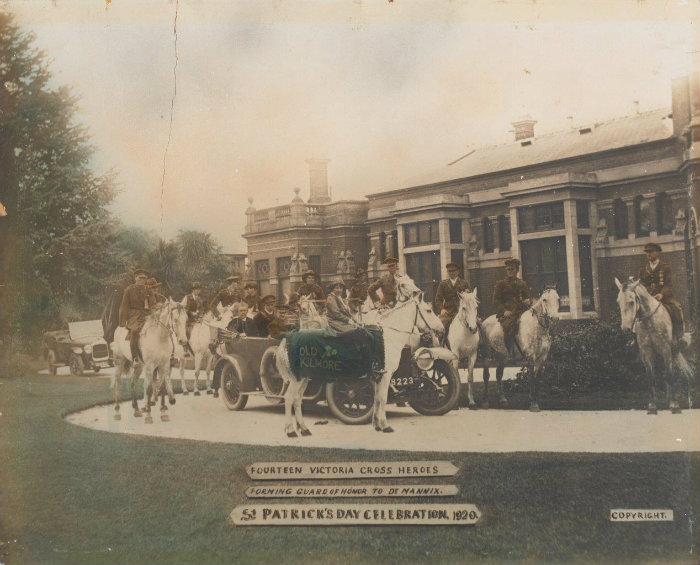 Mannix wielded strong political influence over generations of Australians, including controversial Catholic power-broker Bartholomew Augustus Santamaria, anti-communist activist and founder of the Democratic Labor Party (1954). Santamaria in turn became a mentor to Tony Abbott and other young conservative Catholics in the latter part of the 20th century. 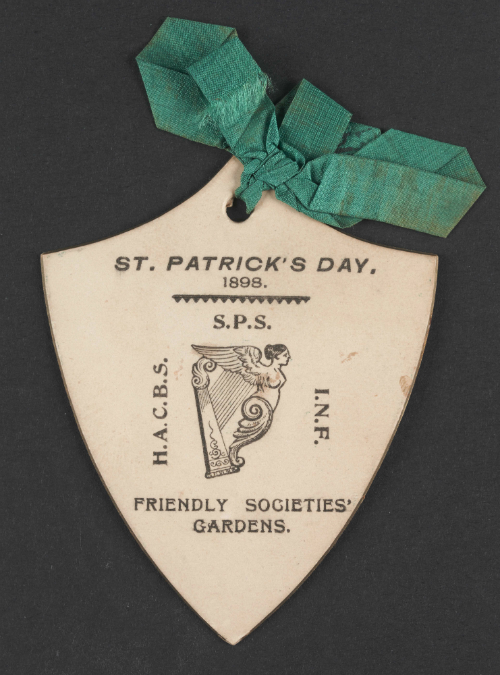 In 19th century Melbourne, St Patrick’s Day was inevitably both a political and religious commemoration, led by Catholic-friendly societies that merged welfare with activism. 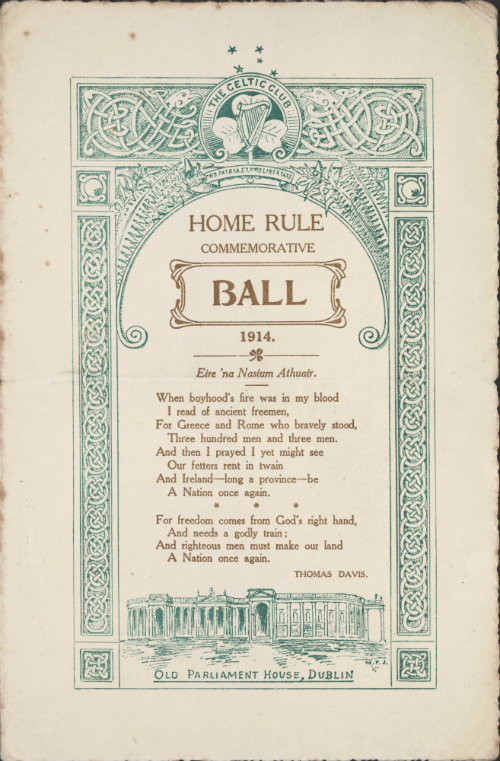 Mannix hosts a céilí in Melbourne, 1918 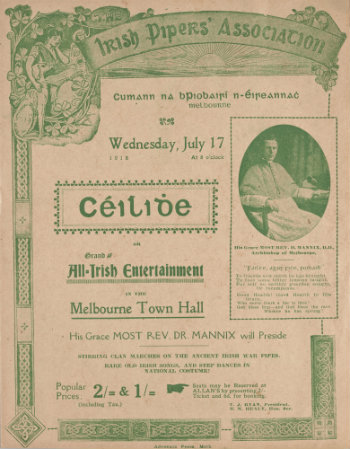