Irish politics regarding union and independence, 1913 – 1949

January 1913: Militant opposition to Home Rule (which seemed imminent) builds in northern Ireland and the Ulster Volunteer Force is created.

4 August 1914: Home Rule is postponed by the outbreak of World War I.

1914–15: The IRB, the ICA and others band together to plan an armed uprising against the English in Dublin, scheduled for Easter Sunday (23 April) 1916, while England’s armed forces are occupied with World War I.

22 April 1916: Expected shipments of German arms fail to arrive and Eamonn MacNeill (head of Irish Volunteers) attempts to cancel the Rising. The other leaders decided to go ahead, despite the reduced number of Irish Volunteers available.

24 April 1916: The Rising begins on Easter Monday. Padraig Pearse reads the proclamation of the Irish Republic outside the General Post Office, the rebels’ headquarters.

24–29 April: Around 2500 republicans occupy strategic positions around Dublin and engage in battle with 20,000 British soldiers.

28 April: Pearse surrenders on behalf of the republicans and the Rising officially ends, though fighting continues into the next day. The human cost is high: 485 are dead (mostly civilians) and 2000 wounded. Some 3000 are arrested and 1400 imprisoned.

3–12 May: 15 republicans (included the Rising’s seven leaders) are court-martialled and executed, with a final, single execution on 3 August (Roger Casement).

1919: The First Dáil (parliament) proclaims an Irish republic and the War of Irish Independence begins (1919–21), with Michael Collins and Éamon de Valera leading the Irish against English forces.

1921: Ceasefire in the War of Independence as the British and Dáil governments sign the Anglo-Irish Treaty; Government of Northern Ireland takes office.

1922: 22 August, Michael Collins is assassinated by an anti-treaty or British agent.

1923: The anti-treaty republicans agree to a cease fire, ending the civil war.

1927: After years of uneasy truce, de Valera founds the Fianna Fáil party and enters the Dáil.

1949: Ireland is formally declared a republic (according to the Republic of Ireland Act 1948), cutting its last constitutional ties to the British monarchy.

Aftermath of the Rising 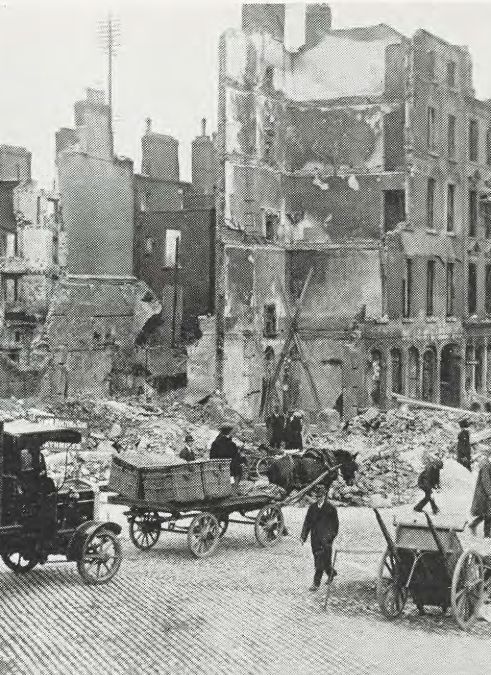 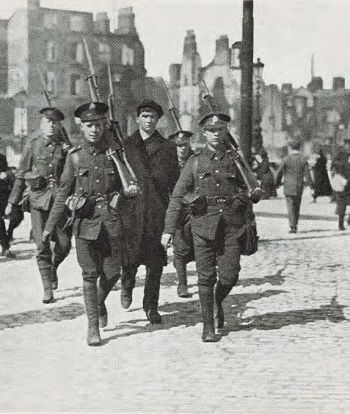 Both images from Dublin after the six days' insurrection by T W  Murphy.