Jessie Clarke was the daughter of Ivy and Herbert Brookes. Her impressive lineage included grandfather Alfred Deakin (Australian Prime Minister 1903-1910). She came from an affluent family but also one with a strong sense of social responsibility.

Jessie completed an Arts/Social Work degree at Melbourne University and then continued her studies in New York.  While there the Australian government offered her a position as junior delegate to the League of Nations Union in Geneva.

In May 1939 Sir Frank Clarke, MLC, (a son of William and Janet Clarke), addressed a meeting of the Australian Women's National League where he made appalling comments about the refugees fleeing the rising tyranny of Europe. The Victorian International Refugee Emergency Council sternly challenged the "gross unfairness" of Clarke's intemperate remarks.

In September 1939, Jessie Brookes (as she was), at the time a welfare officer with the Victorian International Refugee Emergency Council, married Frank Clarke's son Anthony.  Needless to say her views on refugees were diametrically opposed to those of her newly acquired father in law.

During the Second World War Jessie worked with the Lord Mayor's Patriotic and Welfare Fund as a voluntary social worker. In 1946 the Clarkes, together with Mary Adam and Harold Moran, established the Nappie Wash company, to great success.

Jessie Clarke's papers are held at our Library. See the descriptive list link on the catalogue record for a listing of the contents of the collection.

The Pageant of Nations was an initiative of the International Club of Victoria, led by Ivy Brookes (Jessie's mother). It was held as part of the lavish celebrations of the centenary of the European arrival in Victoria,

The Pageant was  opened by the Victorian governor William Vanneck, on 22 October 1934 at the Melbourne Town Hall. The pageant ran for several hours and was repeated at various times during the Centenary.

Jessie wore a spectacular costume representing the State of Victoria.

The cloak represented State's irrigation scheme; the skirt was painted with scenes of Melbourne; and the headdress represented the Yallourn Power Station.

For more on the Pageant, see: 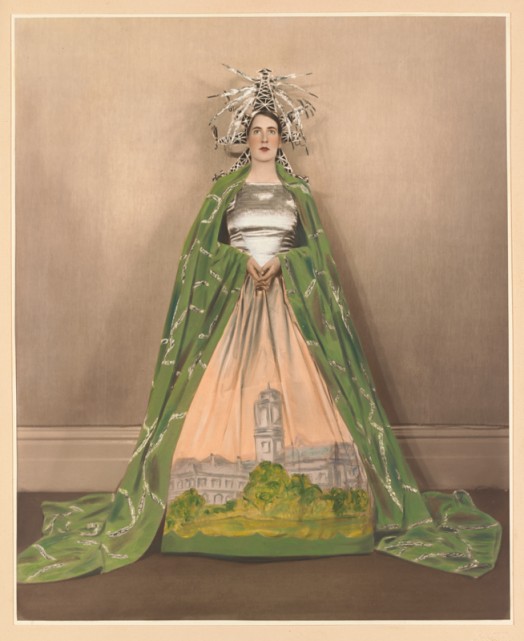 The company was established by Jessie and William Clarke, together with Mary Adam and Harold Moran