Through the Library’s Newspaper Collection you can trace a history of contact, increasing conflict and resistance between Aboriginal people and European settlers.  Later, reporting on the Victorian mission and reserve system and the government inquiries into their operation describe lives framed by coercion and restriction. Reported also were protests and action taken by Aboriginal people against their treatment.

From the 1930’s, Aboriginal issues joined the political mainstream and newspapers provided opportunity for voices of advocates to be heard.

Unmediated Aboriginal voices increasingly appear in newspapers, and (largely from the 1970’s, in the Library’s collections) - Aboriginal groups fighting for rights to services, land and language produced their journals and magazines.

More contemporary reportage of Indigenous issues is available through our hard copy and online collections.

Library staff have complied guides to using our newspaper collection:

The following are available online at the Library, and offsite to Victorian registered users.

These indexes are available in hard copy – book or cards or microfilm. The nature of entries varies from brief description, to headline, or a page reference. Most of the papers indexed are available on film in the Newspapers & Family History Reading Rooms. 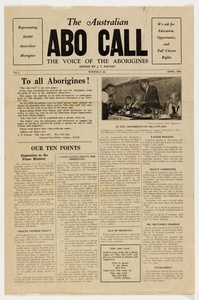 Go to the full text

For the record: 160 years of Aboriginal print journalism

A remote possibility is the story of Imparja Televison and Indigenous broadcasting in remote Australia, established by the Central Australian Aboriginal Media Association in Alice Springs in the 1980's.

Our collections include additional material on broadcasting including some recordings of television programs, reports and links to web sites.