Resources about working in the film industry

Working in the film industry

This page looks at the resources at the State Library Victoria and elsewhere that are about working in the film industry.

There are a huge range of roles within the film industry, be it on the set of a film, off the film set organising film funding, or being the star of the film itself.

Most of the books listed in the pages below are guide books that provide some help and information on how to work in the film industry.

There are numerous educational facilities that offer filmmaking (including documentary) and film crew related courses in Melbourne, and some in regional Victoria as well. Some of these are short courses, whilst others, on completion, will give students higher education qualification such as a Certificate, Diploma, or a Degree in a filmmaking course.

When searching for a filmmaking related course on your preferred educational institution try any of these keywords: film, media, screen.

Short courses on filmmaking are run by many of Melbourne's TAFE and tertiary institutions, as well as Melbourne's Centre for Adult Education. No experience is required to attend the Summer School in Filmmaking at the University of Melbourne, which is held in early January each year. The Australian Film, Television and Radio School (AFTRS) hold occasional filmmaking short courses in Melbourne

Certificate, Diploma and Degrees level courses for screen related training are held by most of Melbourne's tertiary institutions and several TAFE's.

Finding resources about people who have worked in the film industry

There are hundreds of biographies and other material available on the State Library Victoria catalogue about people who are working or have worked in the film industry. For example: "Alfred Hitchcock", "Jane Campion", "Nora Ephron"

An interesting overview of the filmmaking process is The guerilla film makers pocketbook / by Chris Jones, Andrew Zinnes, and Genevieve Jolliffe.

The pages below list searches and resources for various different roles in the film industry.

There are many articles online that discuss some key tips when making a film for the first time.

For many filmmakers, getting their film accepted into a film festival is a major achievement.

Searching for general and instructional materials about producers and or directors can be tricky as these terms are often placed within the subject heading (and often together) for many different types of film related material.

Below is a list of useful items for producers that discuss and offer advice for those roles.

There are many biographical and autobiographical works on various producers on the catalogue.

Film directors and film direction: search and some key books

Searching for general and instructional materials about producers and or directors can be tricky as these terms are often placed within the subject heading (and often together) for many different types of film related material.

Below is a list of useful items that discuss and offer advice for directors.

There are many biographical and autobiographical works on directors in the Library catalogue.

There are many guide books available for screenwriting. A small selection is listed below.

There are many websites online that have film scripts to download, but it is worth checking that the items are actual film scripts (with correct formatting spacing etc) or just transcripts of the movie dialogue.

The below journals have detailed information about techniques and equipment used when making particular films.

A related search term is - fashion in motion pictures

Resources for other crew roles

Casting - How they cast it : an insider's look at film and TV casting / by Rob Kendt.

Stunts - The full burn : on the set, at the bar, behind the wheel, and over the edge with Hollywood stuntmen / Kevin Conley.

Documentary filmmaking requires some different skills compared to making a fiction film. Much of what is listed in the other categories on the 'Working in film' page will be relevant, but here are some resources especially for the documentary filmmaker.

Website - Documentary Australia Foundation - a non for profit agency that assists filmmakers to bring their documentary films to life.

DP/30 - video series of in-depth interviews with key actors and crew on a wide selection of films and documentary.

Audio visual essays on film can be excellent guides for filmmaking and the techniques and decisons made and used by cast and crew. Some examples of these are - Every Frame a Painting, Audiovisualcy. 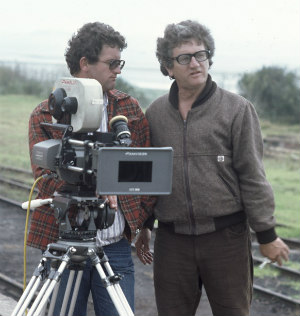 [Tim Burstall with cameraman and one other crew member on train station platform during filming of "Partners"] [picture] / Rennie Ellis H2011.2/3273

The Screen Australia website has a page about starting a career in the industry. Read their guide titled Getting started for very useful links to many resources regarding education (courses to take), funding, copyright, professional assistance.

The site has other content including Making it in Hollywood, sample budgets and paperwork to assist with monitoring costs, and filmmaking grants to apply for to secure funding.

VicScreen has many resources on its website, including details to obtain funding for film projects and skills development, which links to various educational and on the job training and crewing opportunities.