In Port Phillip's early hotels, alcohol rather than food was the attraction. Wine, champagne and spirits were sold, with beer's popularity growing as refrigeration issues were addressed. Early liquor legislation tied alcohol sales to the provision of food and travellers' accommodation - until 1918 counter meals were available for free to entice drinkers. Hotels also fulfilled the important role of a public space for meeting and celebration.

The gold rush and the related spike in population triggered a diversity in eating establishments. More refined dining rooms followed the French tradition, complemented by an array of coffee and tea houses, chop houses, sixpenny and shilling cafes.

A.W.Greig, writing in The Argus of Bygone days states, "No-one need starve if he had sixpence, for that was sufficient to provide him with three courses and tea or coffee...the large plate filled to overflowing with really good, nutritious food."

Temperance advocates were instrumental in building coffee palaces. Coinciding with Melbourne's building boom of the 1880's, over 50 operated in Melbourne at their height, including the Windsor Hotel - originally The Grand; and in regional centres such as Ballarat, Queenscliff and Mildura.

The dining rooms of large hotels of Melbourne - such as the Menzies, Australia, Scott's and Oriental provided 'haute cuisine', their ballrooms hosting lavish events for a wealthy and successful clientele.

Until the 1950's, for many, a meal at a hotel was the only opportunity to dine outside the home, the quality of the dining room helping to attract custom. Generally the food was simple and affordable.

The Australian pub - history of hotels in Australia, including chapters on food and dining.
Old pubs : inns, taverns and grog houses on the Victorian gold diggings
The land boomers: the complete illustrated history
Unique and deplorable: regulating drinking in Victoria
Under the influence: a history of alcohol in Australia
The vagabond papers - written in 1877, impressions of Melbourne life. Searchable text.

Photographs and lithographs of early buildings are included in the collection - from the search page choose Pictures and photographs from the drop down box, then enter your search terms: Hotels, cafes, restaurants. You can add a suburb, or town, or name of a hotel you are trying to find.

The post war period ushered in great changes to the way we ate and drank. Early migrants, chiefly Italian, had a significant influence on the hospitality landscape as people looked to recreate social worlds in their new country. The Melbourne 1956 Olympics highlighted the state of the restaurant and dining scene, and many European chefs arrived, with some staying, including Herman Schneider.

As immigrant communities settled, areas became known for their foods, both for shopping and eating. Included in these are the Vietnamese community in Victoria Street, Richmond, Footscray and Dandenong, the Chinese community around little Bourke St, Melbourne; the Greek community in Lonsdale St, Melbourne, Oakleigh and Northcote, Jewish communities in Carlton, Caulfield, Elsternwick, and St Kilda, the Italian community in Carlton and Middle Eastern countries in Brunswick. Their contributions have now spread far beyond these initial locales. New arrivals have also settled in regional Victoria - such as the Italian community in North East Victoria and the Iraqi community in the Shepparton region.

Coffeehouses - items from the Library's collections
Tolarno Bistro : the life, time and recipes of a remarkable restaurant - role of the Mora family in Melbourne's restaurant scene.
Maxim's : the restaurant and the people - Maxims in South Yarra in the formal, french style, operated from 1956.
Grossi Florentino: secrets and recipes - the Florentino restaurant, opened by Rinaldo Massoni in 1928, and owned by the Grossi family since 1999.
Mietta's Italian family recipes - the story of Mietta O'Donnells family, as well as other Italian families and their contribution to the Victorian restaurant industry.

The restaurant scene - further encouraged with the introduction of  BYO dining in 1965 - had begun to takeover the role previously enjoyed by the big hotels with large kitchen brigades.

After mounting pressure, John Nieuwenhuysen was appointed to undertake the 1986 Review of the Liquor Control Act . An outcome of the report was the new Liquor control act, which opened up the restaurant and hospitality industry to a more relaxed regulation of food and alcohol.

Many of the chefs working in Melbourne during the 1980's, were operating in a time of great change. Pub kitchens refined their culinary offerings, opening up employment and creative opportunities. The near monopoly of alcohol sales enjoyed by hotels was broken as cafe's, bars and less formal restaurants proliferated.

Melbourne : the making of a drinking and eating capital - the story of liquor licensing, especially post the Nieuwenhuysen review.
Melbourne by menu : the story of Melbourne's restaurant revolution
Flavours of urban Melbourne - books showcasing the dynamic cafe scene in Melbourne.

The Library holds several archives of photographs, recording Victorians eating out and celebrating:

The Library's menu collection includes a wide range of examples, mostly from Melbourne restaurants. They provide snapshots of the trends in dining through their language, the range of dishes on offer, and the ingredients used. Menus helped to create a mood in a time when a night out at a restaurant was almost a theatrical experience. Two Faces, Maxims, and Glo Glo's, hotels such as the Australia, the Windsor, the Chevron and the Savoy Plaza created atmospheres of European sophistication. French cooking styles and terminology were used extensively.

Sporting events were celebrated with special extra decorative menus - the racing carnivals figure prominently.  The ship's menus, especially from the 1930's, echo the times and the journey with complementary artwork and themed dining. Less formal, on the run eating options are also included.

Donations to this collection are welcomed. Please complete our Collection offer form, and Library staff will contact you.

Melbourne gastronomic : a menu guide to the finer restaurants in Melbourne
Melbourne a la carte : a guide to good eating

Celebrity status has long been bestowed on many chefs and cooks. Today both their work and media involvement extends the reach of the chefs brand. 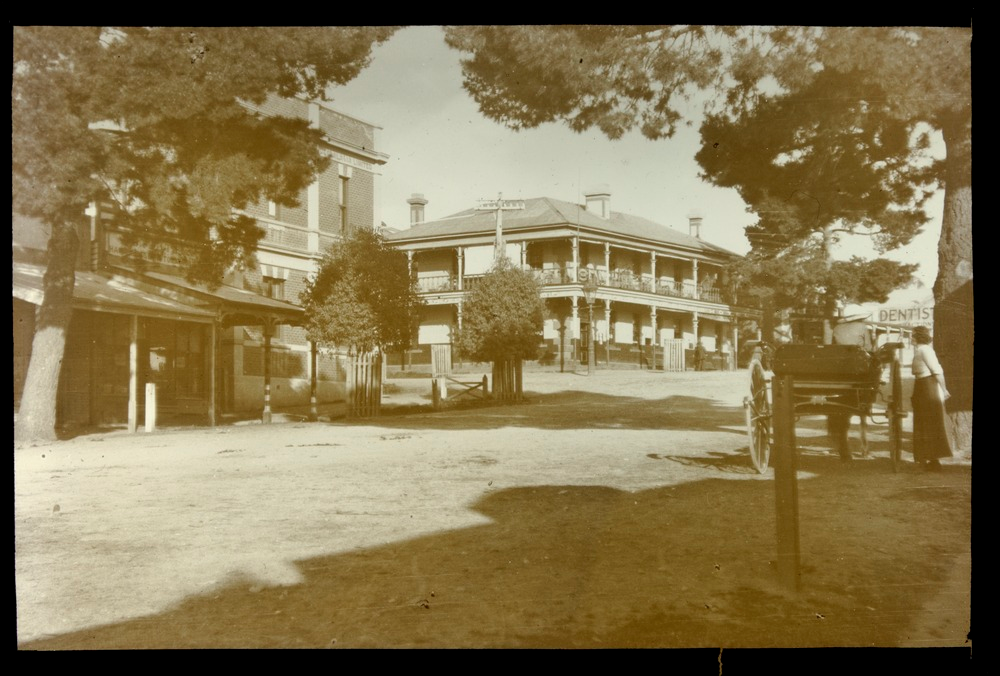 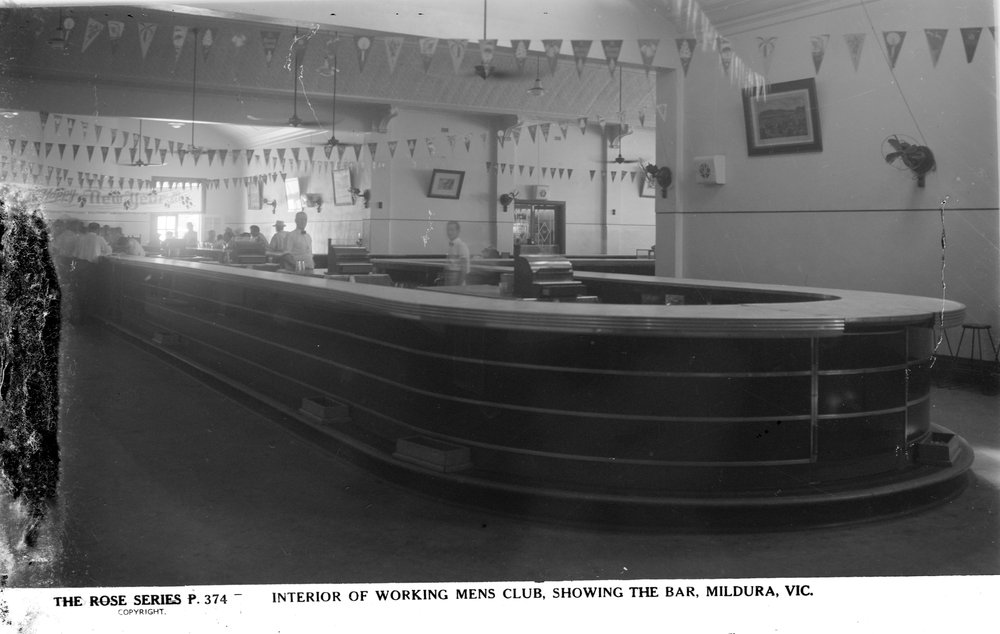 Interior of Working Mens Club, showing the bar, Mildura, Vic, H32492/488. The club once boasted the longest bar in the world, until 1995 when it was dismantled as the club responded to changing demands. 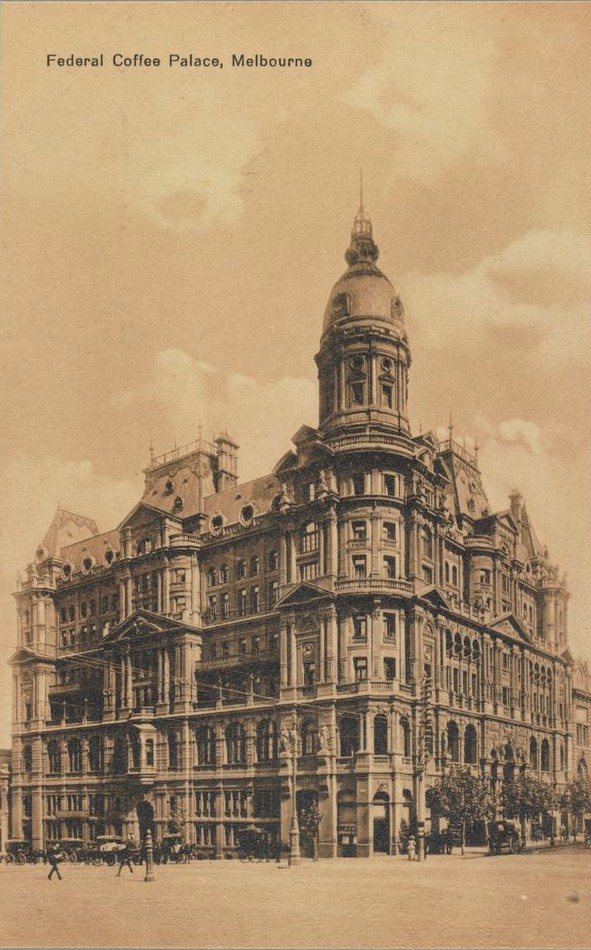 Federal Coffee Palace, Melbourne, H96.200/719 . One of Melbourne's grand coffee palaces, stood on the corner of King and Collins Streets until  demolished in 1973.

From the Menu collection 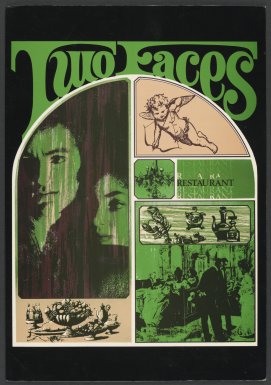 Menu: Two Faces Restaurant. Pictures Collection. Herman Schneider's influential restaurant operated in Melbourne during the 70's and 80's. He arrived in Melbourne for the 1956 Olympics and stayed to become a key figure in the development of the industry. 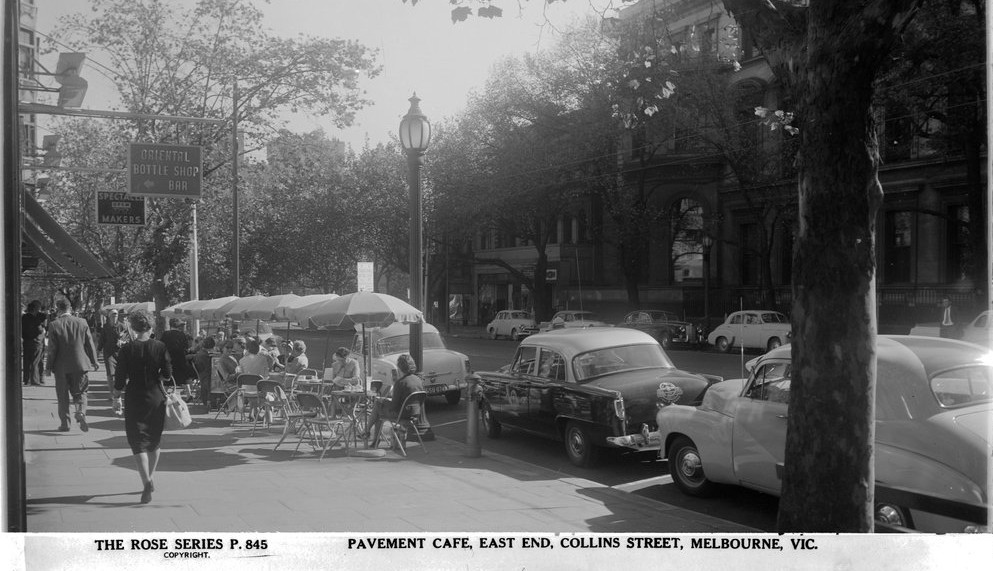 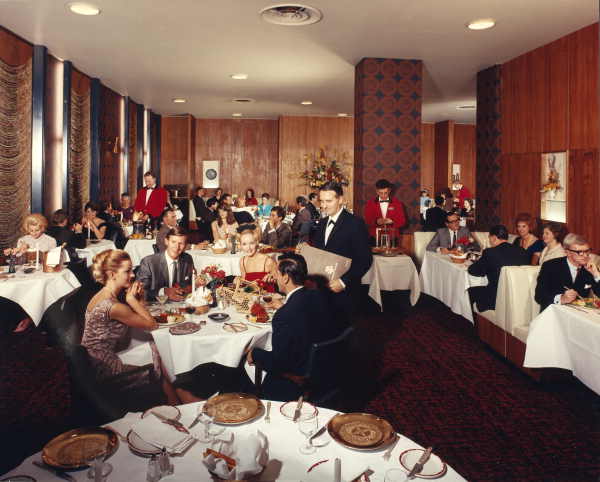 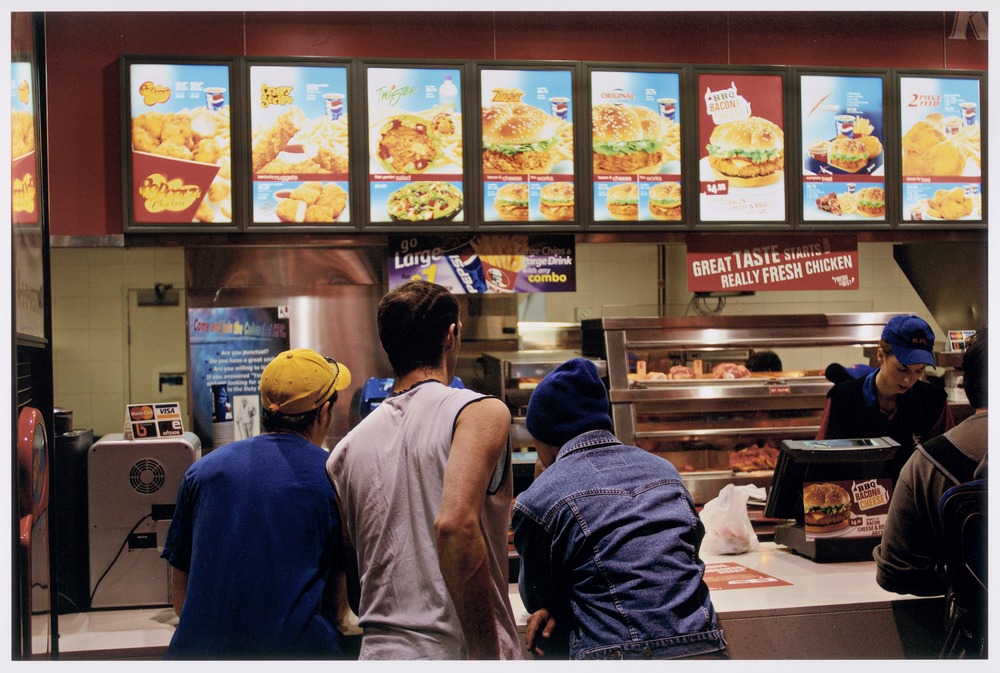