Hallmarking is a form of quality control which dates back to the 14th century craft guilds.  The master goldsmiths took their work to the Goldsmith’s Hall, where the metal was tested or assayed for purity.

In the United Kingdom, hallmarking is one of the oldest forms of consumer protection.

There are only four cities in Britain which now have assay offices - London, Edinburgh, Birmingham and Sheffield.  Previously there were also Assay Offices in other towns. Dublin had approved British hallmarks prior to 1st April 1923 and continues to hallmark items, now under the Republic of Ireland.

Precious metals (gold, silver, platinum and palladium) are too soft to be used unless alloyed with other metals, therefore they must be “assayed” or tested for purity before being offered for sale in the United Kingdom. This legal quality control is regulated by  legislation in both United Kingdom and Ireland.  Articles weighing less than a prescribed weight are excepted.

Assay offices still use a mixture of traditional techniques and modern.  The preferred method of testing currently is x-ray.  However more traditional methods still sometimes have to be used. 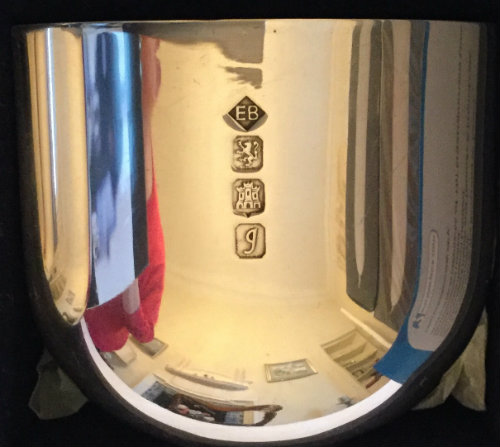 The Convention on the Control and Marking of Articles of Precious Metals is an international treaty between states on the cross border trade in precious metal articles.  It was signed in Vienna in November 1972 and entered into force in 1975.  The Convention is  open to United Nations member states with arrangements for the independent assay and marking of articles and precious metals.

The Convention aims at facilitating trade in precious metal articles while at the same time maintaining fair trade and consumer protection.

The Convention provides a common set of technical requirements for the independent third party verification (hallmarking) and a Common Control Mark indicating fineness.  Each member country agrees to allow goods marked with this mark to be imported without further testing and marking, if such articles would normally qualify for its domestic market.

The Convention’s Common Control Mark (CCM) is the first and only international hallmark and has the same legal status as a national hallmark.  The CCM is applied by the National Assay Office, designated under the terms of the Convention to platinum, gold, palladium and silver after the fineness of the alloys has been checked in accordance with agreed testing methods.​

Australia and New Zealand do not have official government controlled assaying offices.

Australian gold and silversmiths can stamp their initials and, for example, the words sterling silver or 925 on their work , however the buyer has no guarantees, as there is no assaying here.

A group of Australian manufacturing jewellers have formed The Gold and Silversmiths Guild of Australia that set their own standards for Guild members.

The United States assay offices only relate to government coinage mints.They are not involved in hallmarking. The U.S. does not have this legal assaying protection.