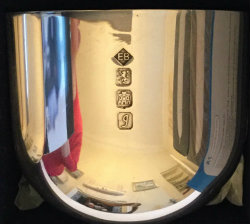 See also the definitions page in this guide for additional information on hallmark components.

Note at centre of the image at right the four elements of the hallmark. Detailed image of hallmark far right.

Components of a hallmark

The four components of a hallmark are: the sponsor or maker’s mark, the standard mark, the assay office mark and the date letter for the year.

Hallmark identification should answer four important questions - where; what; when; who.

Locate the assay office.  The four still in operation in the United Kingdom are London, Edinburgh, Sheffield, and Birmingham, and one in Dublin.

The assay office mark identifies in which one of the Goldsmiths’ Halls the article was tested and marked.

There were other previous assay offices. Our resources will help identify these.

Use the standard mark to determine the fineness of the metal.

If your item does not have one of the standard fineness marks, either traditional or numerical, then it is probably silver plate or is from another county.  Go no further.

The traditional marks are:

Prior to 1975 the date letter varied for every office.  After that it became uniform for every city. Since 1999, the date letter has been optional. Most silver and goldsmiths making bespoke pieces will still opt to use the date letter, however for mass produced silver items it saves the importers money to leave it off.

The maker’s mark  bears the initials of the maker in a shield approved and registered at the assay office.

The item may also have some commemorative or duty marks. Historically levies were placed on precious metal and a duty mark indicated that it has been paid.

Special commemorative hallmarks are created to celebrate major events. For Britain these included  the Queen's Coronation (1953) and the Golden Jubilee (2002). For Ireland these included  the Jubilee Mark – marking the golden jubilee of the 1916 Rising (1966) and the Dublin City Millennium (1988).

Hallmarks can be applied in one of three ways. The traditional method of marking is by hand punches, and is still the favoured method. Pressmarking is an automated form of hand marking but in the 21st century marking by laser is also an option.