A hallmark is a stamp applied to an article of precious metal (gold, silver, platinum and palladium) after testing by an official independent assay office, which denotes the fineness of quality.

Hallmarking dates back to the craft guilds in the 1300s and is the oldest form of consumer protection which in view of the historically high price of precious metal and with globalisation, is more important than ever.

Hallmarking is supported by legislation in both United Kingdom and Ireland and these countries have the most stringent requirements for hallmarking.

Precious metals are too soft to be used unless alloyed with other metals.  Therefore all precious metal articles must be “assayed” or tested for purity before being offered for sale in the United Kingdom or Ireland.

Assay offices test the purity of precious metals, in order to protect consumers. Articles less than a prescribed weight may be exempt.

Also known as the 'town mark', this identifies the office at which the assaying and marking were done.

This mark consists of the initials of the maker surrounded by a shield.  An assay office will only accept a design for this mark if it is totally distinct from any other mark registered with that office.

This is a traditional mark indicating the purity of the metal. It will either be represented by a numerical value, or a symbol.

The date letter shows the year that assaying was carried out. Prior to 1975 the date letter varied for every office, after that it was uniform throughout the United Kingdom.

Since 1999, the date letter has been voluntary. Most silver and goldsmiths making bespoke pieces will still opt to use the date letter, however for mass produced silver items it saves the importers money to leave it off. 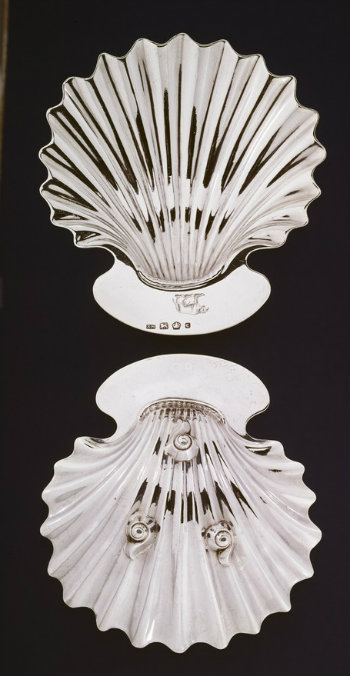 Pair of sterling silver sweetmeat dishes made in 1780 by Richard Morton & Co [Note the hallmarks near the bottom of the upper image] H2008.11/461