This is an important national asset and the longest river system in south-eastern Australia. It passes through 4 states and the Australian Capital Territory. It also contains 3 of the longest rivers in Australia--the Murray, the Darling and the Murrumbidgee, as well as an extensive network of tributaries. 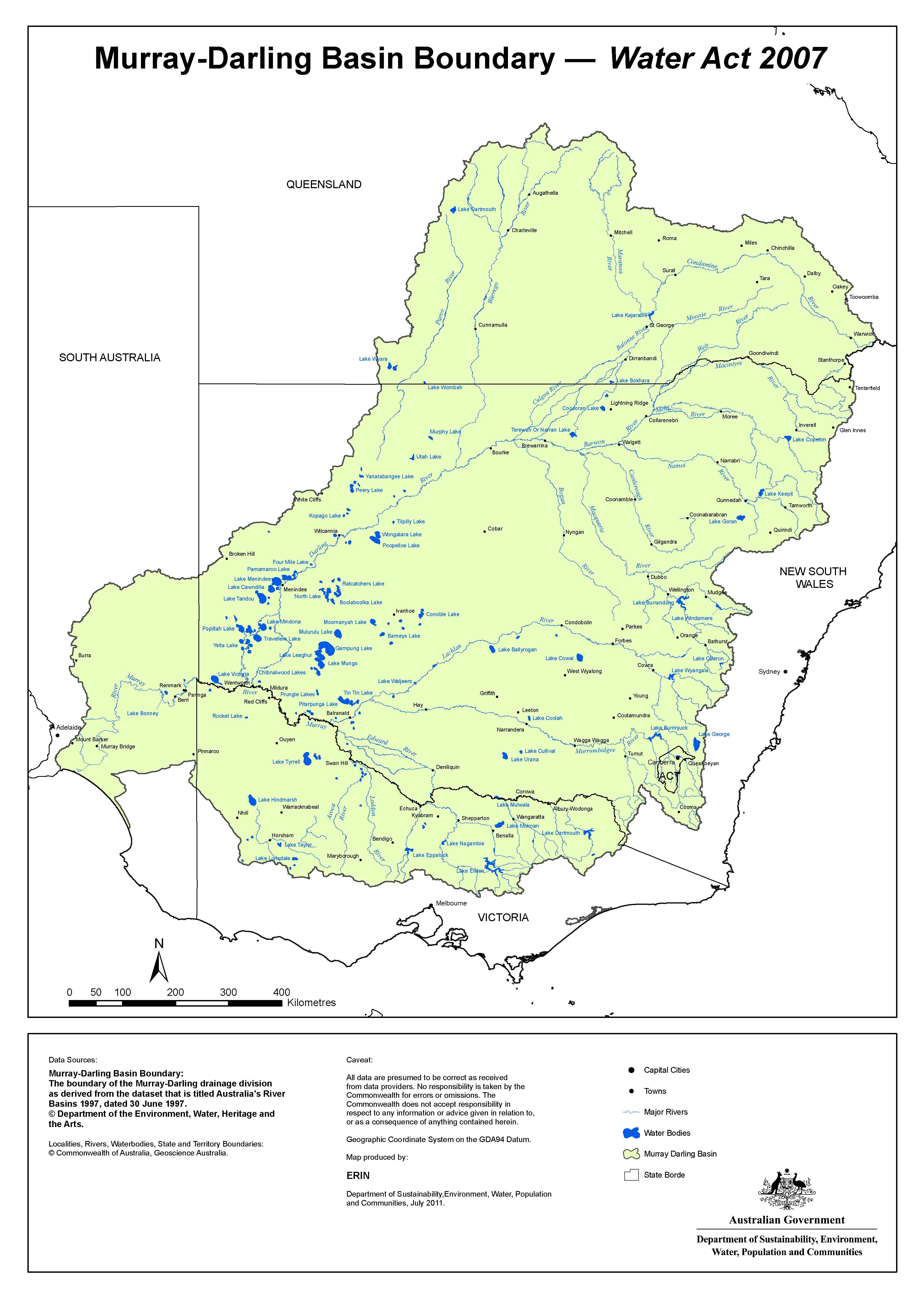 Since December 2008 this Authority took over the functions of the Murray-Darling Basin Commission. As this river system crosses several jurisdictions, including that of the federal government and hundreds of local governments, its management is complex and evolving. For the first time, one single entity is responsible for the management of this water system.

The Murray-Darling Basin Authority reports to the federal Minister of Climate Change and Water. Amongst its functions is the setting of sustainable limits of water use for the Murray-Darling Basin, the development of a water rights scheme which allows for water trading, monitoring the health of the water system, undertaking research and engaging community debate in management plans.

With water being a scarce resource, water or riparian rights seek to regulate access to and use of water. The Federal Government has started a water buy back scheme in order to regulate water use and increase environmental flows to the Murray-Darling river system.

The guide to the proposed Basin Plan provides a series of publications to facilitate discussion and feedback.

To search for information in our catalogue enter the words: murray darling. The results will be a mix of different resources such as journals, maps and books. Use the options on the left hand side of the page to narrow your search. You may, for example, wish to view the results for water-supply or the Murray Darling Basin Commission. Or, you may prefer to limit your results to picture resources or to publications of the National Water Commission.

To search our electronic databases for information from home, you will need to be a registered user of the library, with a Victorian address. This will give you remote access to a selection of databases.

You can also access news articles from a remote location if you’re registered as a Victorian user with us. Visit our website at this page and select Newspapers. Proquest Australia & New Zealand Newsstand and Australia/New Zealand Reference Centre via Ebsco are 2 major newspaper databases that we subscribe to. These newspaper databases have content from major Australian newspapers such as The Australian, The Age, Herald Sun, Sydney Morning Herald, The Advertiser and Courier Mail.

Newstext  & News Store are newspaper archives from News Corporation and Fairfax, publishers of many Australian newspaper titles. A small charge applies to viewing the full text of stories in Newstext while News Store provides free access.

Older historical material relating to the Murray Darling is available via Trove. Apart from digitized Australian newspapers to 1954, this website also has content from books, images, maps, music and archival material.

The critical piece of legislation which set out the basis for the creation of the Murray Darling Basin Authority is the Water Act 2007, and related to this is the Water Amendment Act 2008.

Westlaw AU is an online database that can be searched for cases and commentaries relating to various aspects of water. Some recommended search terms are water rights, riparian rights, water supply, water management, water allocation. Due to licensing restrictions this database is available only to onsite users.