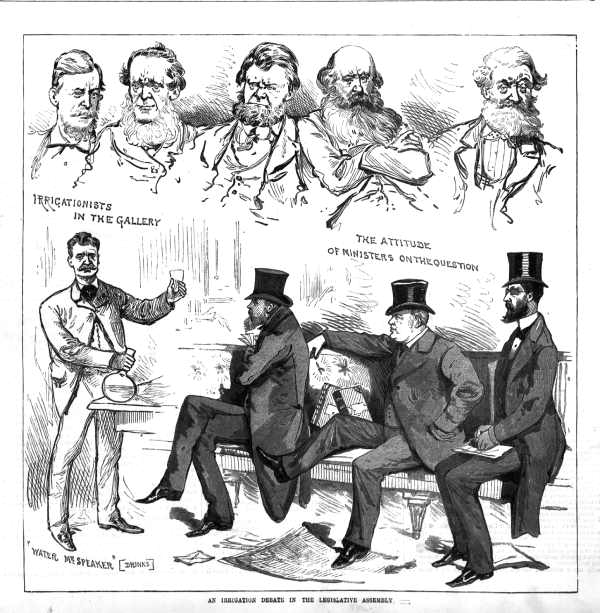 There are many pieces of legislation in Victoria affecting the supply of water and management of water catchments such as Water Act 1989, Water Industry Act 1994, Catchment and Land Protection Act 1994, Safe Drinking Water Act 2003 and the Essential Services Commission Act 2001. Other related acts can be viewed at the website for Victorian legislation and parliamentary documents.

It is also useful to look at consolidations of Victorian acts. These volumes were published in 1890, 1915, 1928 and 1958 and contained indexes with detailed subject breakdown. For example, in the 1915 index, there is an entry for the power to repair and service pipes. The reference points to section 195 of the Water Act, page 4883.

Subordinate legislation, such as regulations consolidated from 1996 pertaining to Victorian acts, is also available at AustLII. Earlier regulations are available at the library from 1902 at RB/YA 346.9945 PU .

The digitized Victorian Government Gazette 1836-1997 is worth researching, but after 1962, regulations published in the Gazette were in the form of announcements rather than reproduced in full text. To see the full text, consult 1851-1986 regulations in hard copy. In 1987 the gazette was split into three different gazettes -  General (G, weekly); Special (S, irregular); Periodical (P, lengthy non-urgent notices, irregular).

If you’re researching Victorian law cases on the topic of water, it would be useful to consult the Consolidated index to Victorian law reports 1861-1982  as well as our law e-resources such as LexisNexis CaseBase and Thomson’s Legal Online which are only available to onsite library users.

Each Australian state and territory has enacted legislation that governs the use, management and conservation of water within its regions.

There are some policy documents that facilitate co-operative arrangements. The National Water Initiative, agreed to by the Council of Australian Governments, provides the basis for water reform.

Water infrastructure charge rules came into effect on 12 January 2011. They deal with charges payable to irrigation infrastructure operators in the Murray-Darling Basin. Public submissions are available online at the website of the Department of Sustainability, Environment, Water, Population and Communities while the rules are available at the Commonwealth government's ComLaw website.

A useful index to use when researching government publications is the Consolidated index to the Checklists of Royal Commissions, Select Committees of Parliament and Boards of Inquiry, held in the Commonwealth of Australia, Queensland, New South Wales, South Australia, Tasmania and Victoria, 1856-1960  compiled by Jean Hagger and Tina Montanelli.

Commonweath hansards back to 1901, for the House of Representatives and Senate (archived 1901-1981, 1981-2009) are available via the website of the Parliament of Australia.

A list of Royal Commissions and Commissions of Inquiry appointed by the federal government from 1902 is available via the Parliamentary Library.

Westlaw AU is an online database that can be searched for cases and commentaries relating to various aspects of water. Some recommended search terms are water rights, riparian rights, water supply, water management, water allocation. Due to licensing restrictions this database is available only to onsite users.

Some useful books for researching the law related to water: