In recent years a number of detailed histories of the game have appeared. There has also been greater attention to well researched club histories. The Trove Australian Historic newspapers digitising project has made access to contemporary reports of the game from the earliest days very easy.

All round sportsman Tom Wills is credited as one of the inventors of the game. He was sent to England to attend Rugby School, the birth place of its' namesake football code rugby.

Tom Wills early years were spent in western Victoria (near current day Moyston and Ararat) and it has been theorised that he may also have been influenced by the Australian Aboriginal game Marn Grook.

Tom Wills excelled at football and cricket but also had an unhealthy fondness for alcohol and ended as a tragic figure. Under supervision for increasingly aberrant behaviour, he stabbed himself with a pair of scissors, dying at only 44 years of age.

His cousin Henry Harrison, another outstanding athlete, was another credited with the development of the game. A more sober figure than his cousin, he chaired the 1866 rules committee and was vice president of the Victorian Football Association when it was established in 1877.

A number of historians have identified a link between Australian rules football and the indigenous game Marn Grook.

Search the Historic Australian newspapers (Trove) (1803–1954) using keywords. Narrow your search to specific periods. The searching process can be a little sporadic so persevere and vary terms. Don't use too many keywords. Start with broad searches and then add or vary terms to narrow the search. 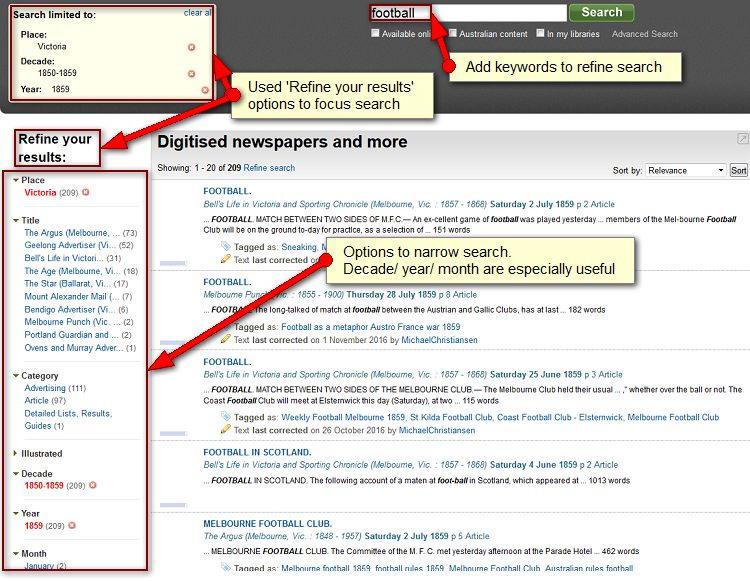 Trove also offers the option of creating a user name. This enables you to create lists and add comments. Users can also transcribe text to improve the accuracy of searching the Trove Historic newspapers. The Lists option appears after you do a search.

Lists and tags can be a good way of finding items previously identified by another patron. For example there are lists for :

Here are some examples of tagged articles:

One very early account of a game comes from the satiric magazine Melbourne Punch, in the form of a poem published on 30 September 1858.

...literary lazzarone,
Sipping his pale Martell and water
Long pondered how the time to slaughter;

At last nose-led by ruling star
He hears the hail of Richmond car,
The driver speedily divined
The yearning of the minstrel mind,
For new sensation—" Sir," said he,
The kicking match begins at three,

...squeezed as tight as barrelled haddock
Was driven to the Richmond paddock.
A score of swells were garbed in blue,
As many more in motley hue,
The first, South Yarra's careful pick
The other Melbourne's men of kick
And on the ground they pitched
A wondrous spherical affair
Of India-rubber filled with air,
In leather neatly stitched,

He then gives a detailed account of the game in rhyming verse, ending with a hard fought Melbourne victory:

Now thrice the blues were nearly licked
For thrice the Melbourne men had kicked,
The ball, where rightfully afraid,
South Yarra formed a barricade
Of chosen kickers, men in rows,
With stout resolve and stalwart toes ;
When Wills, the Melbourne chief,
With picked-out men of lively shin,
Banded to make a rush and win,
And bring the blues to grief.

However, as the story ends,
The Melbourne mob out-kicked their friends,
And fair within the fatal stick,
With one triumphant joyous kick
And mad delight, still waxing madder,
They sent the India-rubber bladder.
The goal was passed, the day was won
South Yarra was completely done ;
And each blue-coated player wins
A brave repute and plastered shins,
And every motley-colored kicker
Betook him to a special liquor. 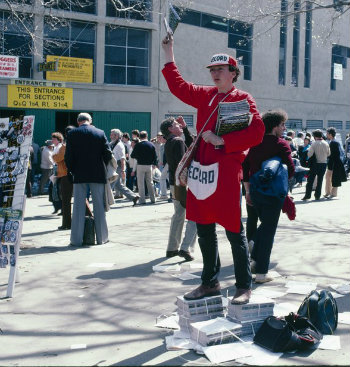 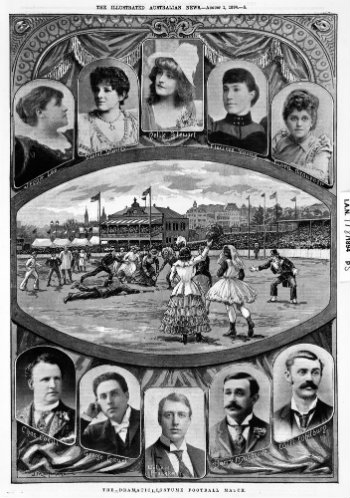 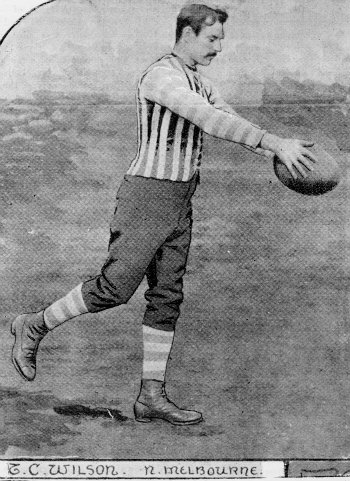 History timeline from VFA to VFL to AFL & AFLW