Statistics have recently become an integral discussion of the game with ever more complex measurements of different aspects of team and player performance.

While basic statistics of scores and goal scorers has been part of the game since its inception, the plethora of statistics now gathered is quite new.

Possession statistics in the VFL were gathered and published in specialised football magazines as far back as the 1960s.

As far back as 1958, the Melbourne Age published basic possession statistics for finals matches. See this example from the First Semi Final of 1958.

At the commencement of the 1973 season Inside Football began publishing statistics for each player in each game. These included kicks quarter by quarter, handballs, marks, free kicks, scores and missed shots. This magazine is available at the Library but not online.

From the Second Semi Final 1953, the Sporting Globe published statistics for the finals matches. These included kicks, marks, free kicks, scores and shots. It is available online to 1954 and on microfilm at the Library for subsequent years. For the first semi final of 1953  only free kicks, marks and scores are recorded.

Footy Week began publication at the start of the 1965 season and published individual statistics for each player in each team. These included total and 'effective' kicks and handballs, frees, marks, scores and missed shots.

There was also an analysis of the location of free kicks (forward line, half forward line etc.), and the number of out of bounds and ball ups.

The AFL website has detailed statistics for every player in every game from 2001.

This publication includes a staggering amount of statistical information, current and historical, trivial, quirky and obscure.

Histories of clubs and leagues

Histories of leagues and clubs will often contain detailed statistics. Search by the name of a league or club on our catalogue. If you get a large number of results, add terms such as history or statistics to you search 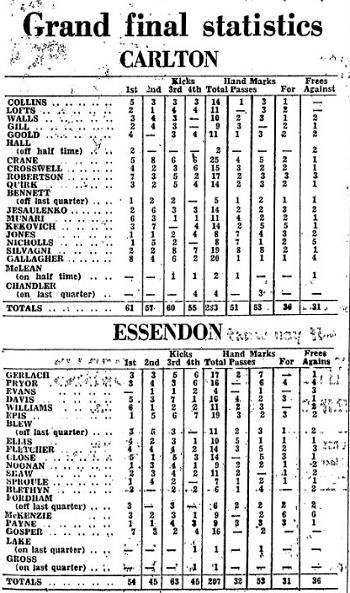