When war broke out, some Australian women travelled overseas at their own expense to help the wounded, while others already overseas enlisted as nurses in British hospitals or in the British army’s nursing service.  The British War Office requested that Australia raise medical units for overseas service.  As Australia had few male nurses, more women were trained as nurses to fill the need for military nursing orderlies, increasing the number of female nurses. Hospitals were set up in to treat the wounded who had been sent home to recover.

Australian nurses proved to be energetic, hardworking and resilient in very difficult circumstances. Challenges they faced included poor facilities, lack of staff, disease, harsh climate and of course, large numbers of wounded and traumatised patients.  Language difficulties with some patients were another problem they had to overcome.

Service records of Australian nurses are held by the National Archives of Australia. Go to  Explore the Collection and click on RecordSearch. From there, click on NameSearch. Type in the family name of the nurse and select World War I from the category of records.

Records for nurses serving with the Australian forces can also be found on the  Discovering Anzacs website.  You can do a simple search or an advanced search by the name of the nurse. A search using the term nurses gives you more records. The site includes news articles and comments.

To find photos of nurses search the State Library catalogue on the Search & Discover page, using the term World War I nurses. Type the words in the Search box at the top of the page, or in the Catalogue search box.

The National Archives UK website contains vast British historical government and public records including service records for World War 1. Many Australians served with the British forces in various areas including nursing. State Library Victoria no longer subscribes to their Discovery database, so you may have to pay to view some records.

Books on Australian nurses in World War I are listed on the library catalogue. The Advanced Search option is recommended, as this allows you to select the Subject option. This searches the official catalogue subject headings for World War I nurses, and makes finding relevant material much easier.

These are some of the official subject headings:

You can also add keywords in Advanced search, for example Australia. Type these in another box.

Librarians  at the Information Desk or on the phone at 8664 7002 can assist with searches. 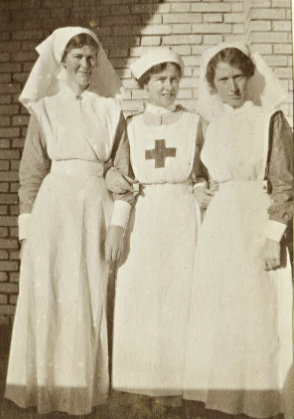 This image is from an album of photographs compiled by Kathleen Gawler, an Australian nurse who served with Queen Alexandra's Imperial Nursing Service. 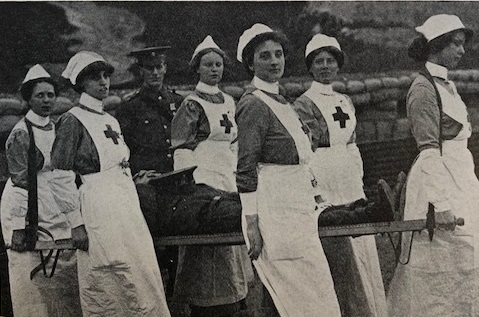