At the end of World War I the massive task of identifying graves and casualties began.

The Office of Australian War Graves was created in 1975. Previously, OAWG was the Anzac Agency of the Commonwealth War Graves Commission.

The Commonwealth War Graves Commission has  the database Find War Dead on their website:

The databases lists the 1.7 million men and women of the Commonwealth forces who died during the two world wars.

The Department of Veterans' Affairs website also has information about the database.

Eric Dermott-Powell researched and compiled a number of books on war graves. They provide names and particulars of Australian and British servicemen buried in particular overseas war cemeteries.

James McClelland wrote a number of books on cemetery records for Australian soldiers buried in overseas cemeteries and those who have no known grave.

For further publications, try a catalogue search under the subject World War 1914-1918 Registers of Dead

Fromelles in France has a number of cemeteries containing Australian dead from the Battle of Fromelles.

The V.C. Corner Australian Cemetery and Memorial was built in the early 1920s. It is located at the approximate point where the Allied lines crossed the road.

The Australian Memorial Park opened in 1998. It is located approximately 200 metres from the V.C. Corner Australian Cemetery and Memorial, on the same road in the direction of the village of Fromelles. It lies at the point where the German lines crossed the road, and has several surviving battlefield fortifications.

The Fromelles (Pheasant Wood) Military Cemetery was completed in 2010. There are other small cemeteries in the area with burials from the battle.  Source: Wikipedia Attack at Fromelles 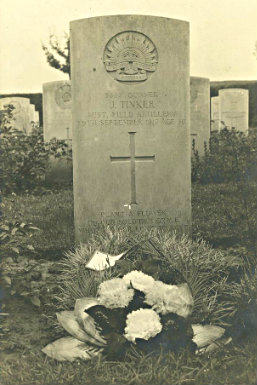 Headstone for Gunner Tinker of the Australian Field Artillery, H42366

The A Street Near You website  allows you to search across a world map to find details of individual men and women who died whilst serving in World War I.

The site features a world map with photos of those servicemen and nurses who died in World War I. The photos are located in the person's home town or area. Click on a photo to find details including  name and rank, date of death and age at death; name and address of parents and the name of the cemetery where the serviceman or nurse  was buried. The source of the record is also given.

You can also use the search box to type in a place name to find the details of deceased servicemen or nurses who came from that location.

Each entry  gives a link to the War Dead database on the Commonwealth War Graves Commission website.

Records are taken from -