All World War I service records  have been digitised and are available to view on the National Archives of Australia website. This includes army, navy, medical personnel and airforce records.

To find the service record of an individual serviceman, go to the National Archives of Australia website, click on Search the Collection and then RecordSearch. On the RecordSearch page, click on NameSearch. You can then search by name and category of records: World War I.

NameSearch provides digital images of the full World War I service record and other documents on servicemen's files.

The website Discovering Anzacs  has unique profiles of both Australian and New Zealand Anzacs who enlisted in World War I, which are linked to their service records. The service record includes details of enlistment, service, details of war injuries or death, and correspondence from the authorities to families.

These records  can also be used in conjunction with unit diaries for a detailed account of the activities of the unit the soldier was attached to.

The AIF Project website has a searchable database of AIF members. It gives basic personal information about each member and his war service. Click on the name of his unit to see a list of other members of the unit and their records.  The full service records are digitised and available on the National Archives of Australia  website.

To research Australians serving in the British Army, or any  British service person, try the National Archives UK website.It has a guide to research on the First World War.

Some items have been digitised, but others need to be requested. State Library  Victoria no longer subscribes to the National Archives UK Discovery database.

NameSearch provides digital images of the full World War I service record and other documents on servicemen's and women's files. 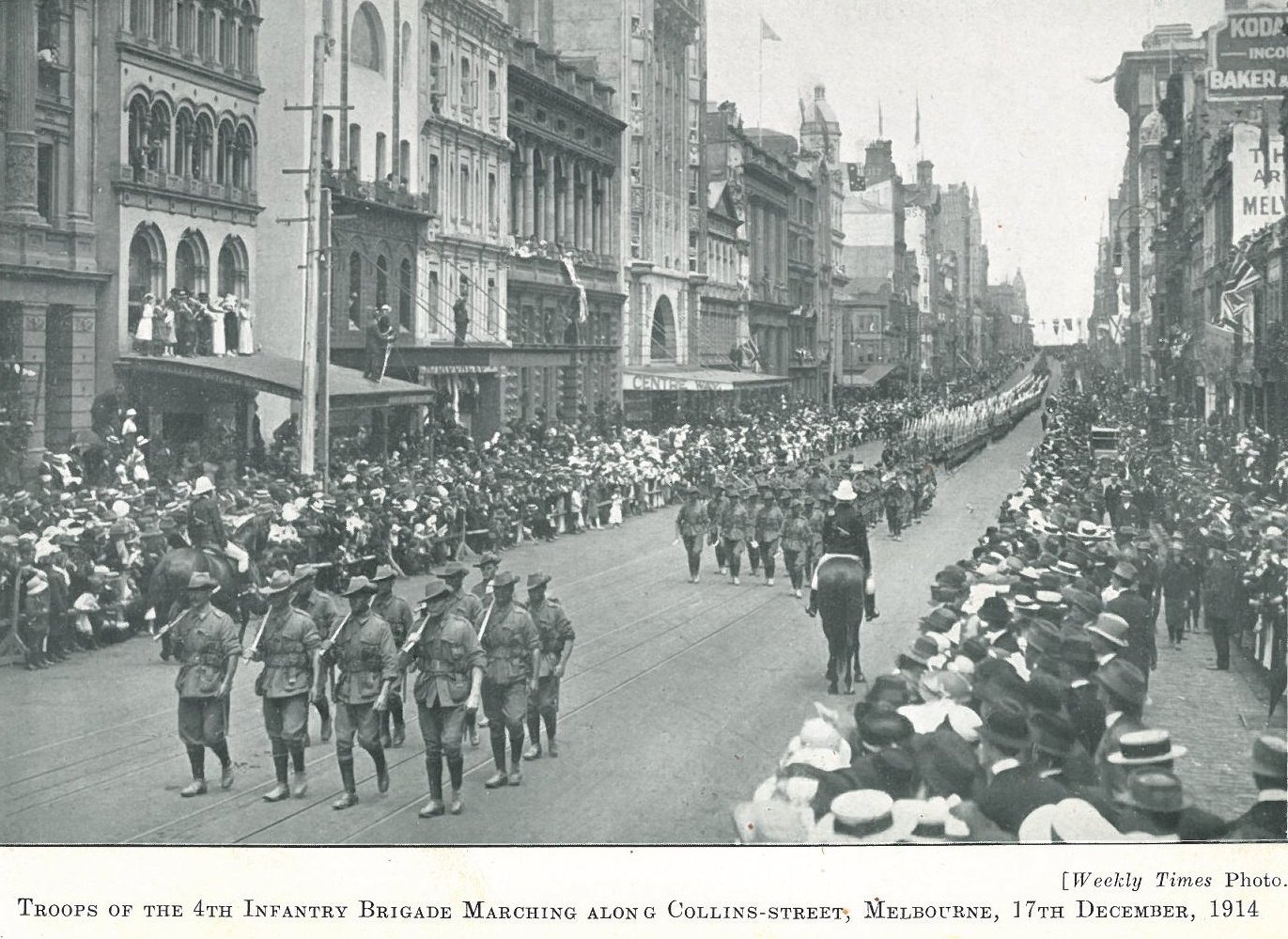 Held  in the State Library Newspapers & Family History Reading Rooms on microfiche at GMF 13. [AWM 8 is not part of the title: it is an Australian War Memorial series number].

The unit embarkation roll details approximately 330,000 AIF personnel, recorded as they embarked from Australia for overseas service during the First World War. It was produced in 1915-1916.

Index to the rolls:

Before consulting the unit embarkation nominal Rolls, you need to consult the index: the Unit embarkation nominal rolls, 1914-1918 war, held in the Newspapers & Family History Reading Room  at G 994.041 UN3A. You need to know the name of the unit and the year of enlistment or embarkation. The index gives you the roll number, fiche number and box number of the records held on microfiche at GMF 13.

Details given on unit members include  name of serviceman, regimental number, rank, trade or calling, marital status, address, next of kin, date of enlistment, military units previously served in and pay details. The Embarkation roll gives the first unit the soldier served in.

Held on microfiche in the Newspapers & Family History Reading Rooms at GMF 15. Includes an index at the front of the sequence.

Details of approximately 324,000 AIF personnel, recorded to assist with their repatriation to Australia from overseas service following World War I.   The nominal roll includes the service number, name, rank, battalion, date enlisted and date discharged. The roll was compiled at the end of the war, and lists the last unit each soldier served in.

You will find it quicker to use the online rolls on the Australian War Memorial Researching Australian Military Service web page.

During the First World War, commanders issued despatches outlining military operations. These were published in the London Gazette.

Details of soldiers performing gallant acts might be mentioned by name in these despatches.

The references below will help you locate soldiers mentioned in despatches.

See also the Medals tab above.

Postcard of Anzac transport in a captured village

The back of the postcard says: "Our boys at the front. Anzac transport halted in a captured village. From official photographs by special permission of the Department of Defence. Proceeds to the Australian Comforts' Fund." 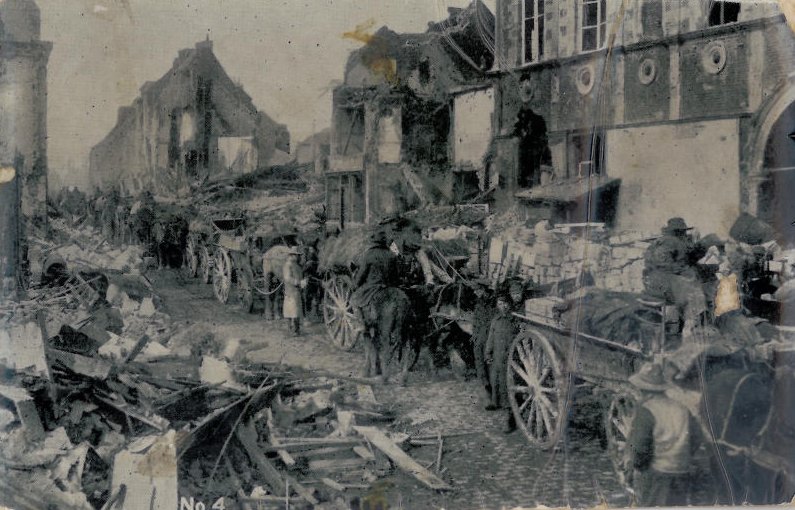 These are additional lists of soldiers from particular organisations, professions or areas.

They are useful if you are unsure of a name but know some other details of a  person (for instance if they worked for the National Bank).

There is also an index to people registered as aliens.

Some World War I unit histories held by the State Library which are out of copyright have been digitised.  You can read some of the out-of-copyright unit histories on our website

All the unit histories held by the State Library are listed on the catalogue on the Search & Discover page. Search the catalogue by the name of the unit or battalion to find books held  by the library.

There were physical requirements put in place for potential recruits.

As the War dragged on these were relaxed. More details can be found in the Encyclopedia on the Australian War Memorial website, under the heading Enlistment Standards.

Some Australians served in the British army during World War I. These records are held by the National Archives, UK. Some records can be found on the Ancestry.com Library Edition databases and  FindMyPast.

To find these databases on  the State Library website, go to the Search & Discover page, then down the page to  the heading Top Databases. Click on the link  More Databases. Go to the heading Family history & biography to find  the links for Discovery (National Archives UK), Ancestry.com and FindMyPast databases.

Discovery can be searched free from home if you have a State Library barcode and live in Victoria.  Ancestry.com and FindMyPast are free only within the library.

The State Library holds some army lists relating to officers in the British army during World War I.

The Quarterly Army list  is a compilation of names of officers, organised by regiment and rank.  It covers the World War I period.  The quarterly Indian Army list is a  list of British army officers stationed in India. It gives the ranks and dates of promotion of each officer. Soldiers who were not officers are not listed.

Staff can request the quarterly army lists from our offsite store if you phone 8664 7002. This information may also appear on Ancestry.com and FindMyPast.

We also hold the Monthly Army list for 1919 on microfiche at GMF 81 Box 3 in the Family History/Newspapers room.

Australians who served with other allied nations

Some Australians served in the armed forces of other nations, so their war service records will not appear on Australian records.

Neil C. Smith has compiled a list of Australians who served in the land, sea and air forces of allied nations. See his book

Under friendly flags: Australians who served in the land, sea, and air forces of allied nations in World War One