The conscription issue in Australia

Unlike the other countries engaged in World War I, conscription was not introduced in Australia.  All the Australians who fought in World War I were volunteers.

Prime Minister Billy Hughes made two attempts to introduce conscription: two conscription referenda were held in 1916 and 1917. Both lost to the 'no' vote. Feelings on the issue ran high and bitterly divided the community. While many politicians favoured conscription, it was strongly opposed by many in the community.

People's reasons for being either pro or anti-conscription varied:  support for conscription usually originated from a sense of loyalty to Britain, which was seen as the Motherland, outrage at Germany's attack on Belgium and France or out of fear for  Australia's safety if Britain lost the war. Women were encouraged to shame their male relatives into joining the army.

Some young men wanted to join the army for adventure and excitement.  Unions tended to be anti-conscription, because they feared their jobs would be taken by foreign labour or women.

Other people, often women, were against war itself. An Anti-Conscription League was formed and the Women's Peace Army, a movement driven by the indomitable Vida Goldstein, mounted a fierce campaign against the war and conscription.

Outspoken Catholic Archbishop of Melbourne, Daniel Mannix, was also vehement in his opposition to the war and to conscription.  However, many Catholics raised in Australia supported conscription and the war.

You can search for materials  on conscription on the State Library catalogue. Type the word conscription in the search box and click Search. When the list of results appears, you can make your search more specific: click on the Resource type, for example books, pictures or manuscripts, and you can limit by Creation date, that is, the year of publication.

The following websites provide information on the conscription referenda:

The Australian War Memorial encyclopedia briefly covers many topics including conscription, with references you can follow up.

World War I newspapers and journals

Historic newspapers and magazines written during World War I provide a rich resource on the conscription debate. They reveal the thoughts and feelings of different people at the time, as well as factual material and propaganda.

Read original World War I newspapers on the National Library of Australia  Trove website. Trove  gives you scanned images of many old Australian newspapers published  before, during and after the World War I years. You can search a particular newspaper or search all the newspapers using a keyword  topic such as conscription. You can choose to browse the issues.

Go to the Trove newspapers page to see the titles. You can click on the title of the newspaper you want and type a term in the search box at the top right of the page. Click on the box "Limit to issues of this title."  This lets you find articles on conscription and other subjects. Or you can just search all the newspapers using the term conscription. Try the term conscription referendum to find information about the referenda (there were two, one in 1916 and one in 1917).

Trove has the full text of The Age and The Argus newspapers for World War I, as well as many interstate and  country newspapers. Not all newspapers are on Trove: The Sun, published in Melbourne, is not here.

Vida Goldstein's female suffrage and anti-war magazine The Woman voter, is on Trove for the years 1911 to 1919.  It is held at the State Library from 1909.

Original government documents relating to the 1916 and 1917 plebiscites are held by the National Archives of Australia.

Click this link to see the ballot paper  for the Military Service Referendum Act 1916.

Click on this link to see the Commonwealth Government Writ for a Referendum showing the question for 20 December 1917 and the results.

See Austlii for a copy of the Military Services Referendum Act 1916. Exemptions proposed were published in the Argus in September 1917.

While these are often referred to as referendums, they were actually plebiscites. The government had the power to introduce conscription and did not require a referendum to change the constitution. However they held a plebiscite in the hope of having popular mandate.

This is a unique collection of  political pamphlets and posters from Victorian political and community organisations. Some items have been digitised and can be viewed online.

The collection includes items dealing with World War I conscription.  Go to the Search & Discover page and type in the words  Riley conscription to find catalogue records of items. Select an item to view. If there is a link saying View Online or you can see a book icon, click on it to go to an online image.

Not all items appear online. Where there is no View Online link or an icon, phone 8664 7009 to request the item from the Riley and Ephemera Collection. 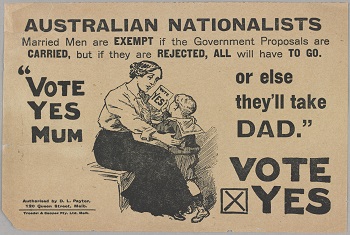 Australian Nationalists Item from the Riley and Ephemera Collection.

Books and pamphlets about conscription

To find books and pamphlets, go to the State Library online catalogue

Search terms: Use the subject or keyword terms Draft Australia to find books and pamphlets listed on our catalogue.

Click on the link Creation Date to limit the search to items published during or near the World War I years.

Pamphlets are contemporary material, valuable because they reveal  contemporary attitudes and ideas. They are nearly always out of print and difficult to obtain.